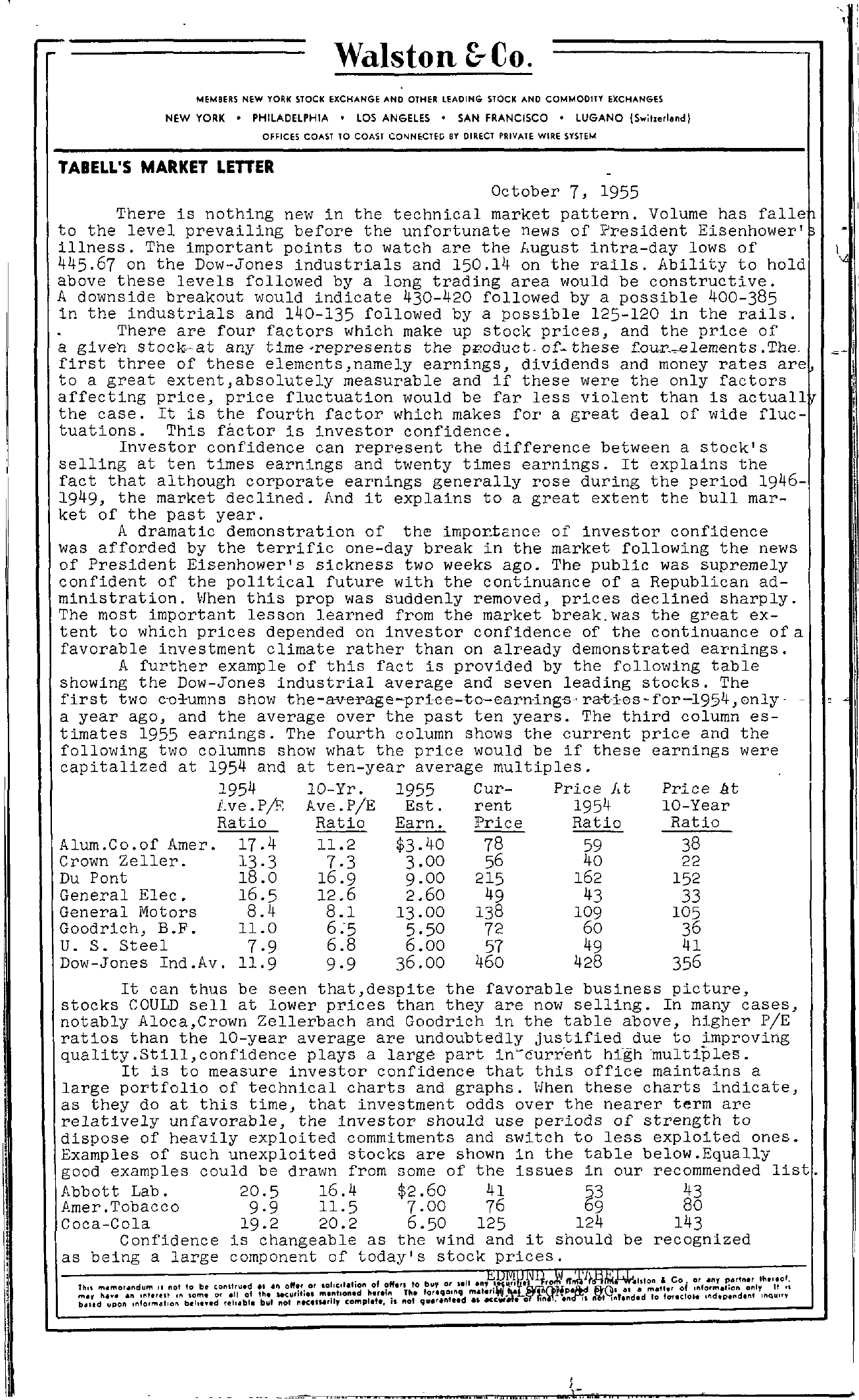 Walston &Co. MEMBERS NEW YORK STOCK EXCHANGE AND OTHER LEADING STOCK AND COMMODITY EXCHANGES NEW YORK PHILADELPHIA LOS ANGELES SAN FRANCISCO LUGANO Swa…l.,d I OffiCES COAST TO COAST COt..lNECTfi BY DIRECT PRIVATE WIRE SYSTEM TABEll'S MARKET lETTER October 7, 1955 There is nothing new in the technical market pattern. Volume has falle to the level prevailing before the unfortunate news of President Eisenhower' illness. The important pOints to watch are the hugust intra-day lows of 445.67 on the Dow-Jones industrials and 150.14 on the rails. Ability to hold above these levels followed by a long trading area would be constructive. A downside breakout would indicate 430-420 followed by a possible 400-385 in the industrials and 140-135 followed by a possible 125-120 in the rails. There are four factors which make up stock prices, and the price of a given stOCk-at any time-represents the first three of these elements,namely earnings, dividends and money rates are to a great extent,absolutely measurable and if these were the only factors affecting price, price fluctuation would be far less violent than is actuallv the case. It is the fourth factor which makes for a great deal of wide fluctuations. This factor is investor confidence. Investor confidence can represent the difference between a stock's selling at ten times earnings and twenty times earnings. It explains the fact that although corporate earnings generally rose during the period 19461949, the market declined. And it explains to a great extent the bull market of the past year. A dramatic demonstration of the impor-t2nce of investor confidence was afforded by the terrific one-day break in the market following the news of President Eisenhower's Sickness two weeks ago. The public was supremely confident of the political future with the continuance of a Republican administration. When this prop was suddenly removed, prices declined sharply. The most important lesson learned from the market breakwas the great extent to which prices depended on investor confidence of the continuance ofa favorable investment climate rather than on already demonstrated earnings. A further example of this fact is provided by the following table showing the Dow-Jones industrial average and seven leading stocks. The first two e-o'\umns show the-a-v-era-ge-pri-ee–to-earn-ing-s, ra-t-i-es – for-19S4, 0nlya year ago, and the average over the past ten years. The third column estimates 1955 earnings. The fourth column shows the current price and the following two columns show what the price would be if these earnings were capitalized at 1954 and at ten-year average multiples. 1954 lO-Yr. 1955 lve.PIS Ave.P/E Est. Ratio Ratio Earn. Current Price Price At 1954 Ratio Price At 10-Year Ratio Alum.Co.of Amer. 17.4 11.2 3.40 78 59 38 Crown Zeller. 13.3 7.3 3.00 56 40 22 Du Pont 18.0 16.9 9.00 215 162 152 General Elec. General Motors 16.5 8.4 12.6 8.1 2.60 49 13.00 138 43 109 33 105 Goodrich, B.F. 11.0 65 5.50 72 60 36 U. S. Steel 7.9 6.8 6.00 57 49 41 Dow-Jones Ind.Av. 11.9 9.9 36.00 460 428 356 It can thus be seen that,despite the favorable bUSiness picture, stocks COULD sell at lower prices than they are now selling. In many cases, notably Aloca,Crown Zellerbach and Goodrich in the table above, higher PIE ratios than the 10-year average are undoubtedly justified due to improving quality. Still, confidence plays a large part high multiples . It is to measure investor confidence that this office maintains a large portfoliO of technical charts and graphs. When these charts indicate, as they do at this time, that investment odds over the nearer term are relatively unfavorable, the investor should use periods of strength to dispose of heavily exploited commitments and switch to less exploited ones. Examples of such unexploited stocks are shown in the table below.Equally good examples could be drawn from some of the issues in our recommended list. AAmbbeor.tTt oLbaacbc. o 290..95 1161..45 72..0600 7416 6539 8430 Coca-Cola 19.2 20.2 6.50 125 124 143 Confidence is changeable as the wind and it should be recognized as being a large component of today's stock prices . ,…. , Wi