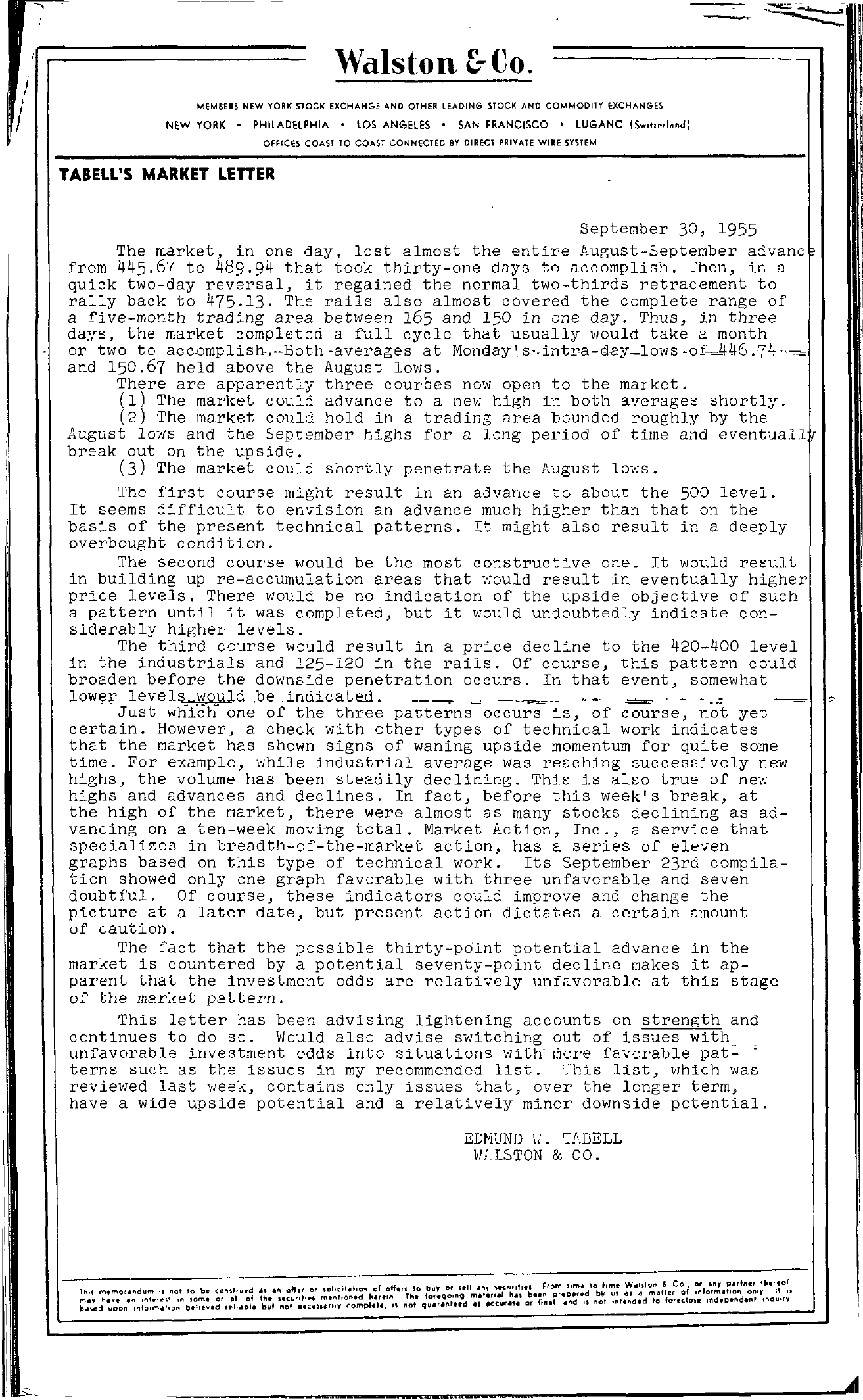 Walston &- Co. I MEMBERS NEW YORK STOCK EXCHANGE AND OTHER LEADING STOCK ANO COt-iMODITY EXCHANGES I NEW YORK PHILADELPHIA LOS ANGELES SAN FRANCISCO LUGANO ISw …Id) OFFices COAST TO COAST CONNECHC BY OIRECT PRIVATE WIRE SYSTEM TABELL'S MARKET LEnER September 30, 1955 The market, in one day, lost almost the entire August-September advanc from 445.67 to 489.94 that took thirty-one days to accomplish. Then, in a quick two-day reversal, it regained the normal two-thirds retracement to rally back to 475.13. The rails also almost covered the complete range of a five-month trading area between 165 and 150 in one day. Thus, in three days, the market completed a full cycle that usually take a month or two to acc,omplish,..Both -averages at Monday' of' !t!J6.74 and 150.67 held above the August lows. There are apparently three courbes now open to the market. (1) The market could advance to a new high in both averages shortly. (2) The market could hold in a trading area bounded roughly by the August lows and the September highs for a long period of time and break out on the upside. (3) The market could shortly penetrate the August lows. The first course might result in an advance to about the 500 level. It seems difficult to envision an advance much higher than that on the basis of the present technical patterns. It might also result in a deeply overbought condition. The second course would be the most constructive one. It would result in building up re-accumulation areas that would result in eventually higher price levels. There would be no indication of the upside objective of such a pattern until it was completed, but it would undoubtedly indicate con- siderably higher levels. The third course would result in a price decline to the 420-400 level in the industrials and 125-120 in the rails. Of course, this pattern could broaden before the lower levels. !'!oyld downside penetration , occurs. In that event, some'w-hat Just which one of the three patterns occurs is, of course, not yet certain. However, a check with other types of technical work indicates that the market has shown signs of waning upSide momentum for quite some time. For example, while industrial average was reaching successively new highs, the volume has been steadily declining. This is also true of new highs and advances and declines. In fact, before this week's break, at the high of the market, there were almost as many stocks declining as ad- vancing on a ten-week movi'Dg total. Market Action, Inc., a service that specializes in breadth-of-the-market action, has a series of eleven graphs based on this type of technical work. Its September 23rd compila- tion showed only one graph favorable with three unfavorable and seven doubtful. Of course, these indicators could improve and change the picture at a later date, but present action dictates a certain amount of caution. The fact that the possible thirty-pdint potential advance in the market is countered by a potential seventy-point decline makes it ap- parent that the investment odds are relatively unfavorable at this stage of the market pattern. This letter has been advising lightening accounts on strength and continues to do so. Would also advise switching out of issues with unfavorable investment odds into Situations with- more favorable pat' terns such as the issues in my recommended list. This list, which was reviewed last week, contains only issues that, over the longer term, have a wide upside potential and a relatively minor dO\mside potential. EDMUND 11. TABELL \!!f,LSTON & CO. 0, I II I i I I ! .Lua..