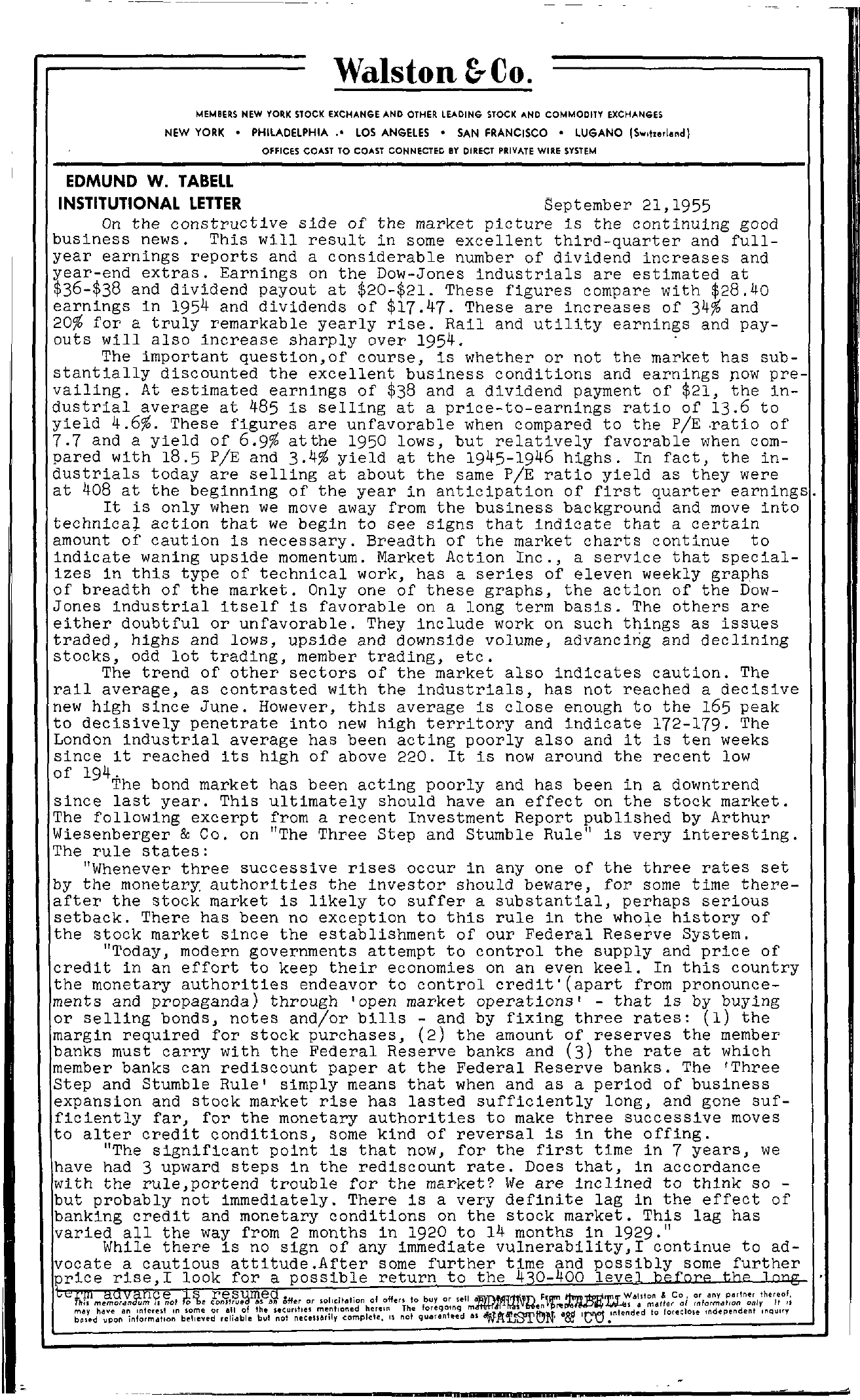 Walston 5- Co. MEMBERS NEW YORK STOCK EXCHANGE AND OTHER LEADING STOCK AND COMMODITY EXCHANGES NEW YORK PHILADELPHIA.' LOS ANGELES SAN FRANCISCO LUGANO ISw,hed.,d) OffiCES COAST TO COAST CONNECTEC BY OIRECT PRIVATE WIRE SYSteM EDMUND W. TABELL INSTITUTIONAL LETTER September 21,1955 On the constructive side of the market picture is the continuing good business news. This will result in some excellent third-quarter and full- year earnings reports and a considerable number of dividend increases and year-end extras. Earnings on the Dow-Jones industrials are estimated at 36-38 and dividend payout at 20-21. These figures compare with 28,40 earnings in 1954 and dividends of 17.47. These are increases of 34 and 20 for a outs will truly also i remarkable year ncrease sharply lyovreirse1.95R4.ail and utility earnings and pay- The important question,of course, is whether or not the market has sub- stantially discounted the excellent business conditions and earnings pow pre- vailing. At estimated earnings of 38 and a dividend payment of 21, the in- dustrial average at 485 is selling at a price-to-earnings ratio of 13.6 to yield 4.6. These figures are unfavorable when compared to the PiE .ratio of 7.7 and a yield of 6.9 atthe 1950 lows, but relatively favorable when com- pared with 18.5 dustrials today PIE are and 3.4 yield a selling at about t the the sa1m9e45P-1IE946rahtiioghys . i In eld fact, the inas they were at 408 at the beginning of the year in anticipation of first quarter earnings. It is only when we move away from the bUSiness background and move into action that we begin to see signs that indicate that a certain amount of caution is necessary. Breadth of the market charts continue to indicate waning upside momentum. Market Action Inc., a service that special- izes in this type of technical work, has a series of eleven weekly grap.hs of breadth of the market. Only one of these graphs, the action of the Dow- Jones industrial itself is favorable on a long term basiS. The others are either doubtful or unfavorable. They include work on such things as issues traded, highs and lows, upside and downside volume, advancing and declining stocks, odd lot trading, member trading, etc. The trend of other sectors of the market also indicates caution. The rail average, as contrasted with the industrials, has not reached a decisive new high since June. However, this average is close enough to the 165 peak to decisively penetrate into new high territory and indicate 172-179. The London industrial average has been acting poorly also and it is ten weeks since it reached its high of above 220. It is now around the recent low of 194T. he bond market has been acting poorly and has been in a downtrend since last year. This ultimately should have an effect on the stock market. The following excerpt from a recent Investment Report published by Arthur Wiesenberger & Co. on The Three Step and Stumble Rule is very interesting. The rule states Whenever three successive rises occur in anyone of the three rates set by the monetary. authorities the investor should beware, for some time there- after the stock market is likely to suffer a substantial, perhaps serious setback. There has been no exception to this rule in the whole history of the stock market since the establishment of our Federal Reserve System, Today, modern governments attempt to control the supply and price of credit in an effort to keep their economies on an even keel. In this country the monetary authorities endeavor to control credit'(apart from pronounce- ments and propaganda) through 'open market operations' – that is by buying or selling bonds, notes and/or bills – and by fixing three rates (1) the margin required for stock purchases, (2) the amount of reserves the member banks must carry with the Federal Reserve bankS and (3) the rate at which member banks can rediscount paper at the Federal Reserve banks. The 'Three Step and Stumble Rule' simply means that when and as a period of bUSiness expansion and stock market rise has lasted sufficiently long, and gone suf- ficiently far, for the monetary authorities to make three successive moves to alter credit conditions, some kind of reversal is in the offing. The significant point is that now, for the first time in 7 years, we have had 3 upward steps in the rediscount rate. Does that, in accordance wi th the rule, portend trouble for the market lve are inc lined to think so – but probably not immediately. There is a very definite lag in the effect of banking credit and monetary conditions on the stock market. This lag has varied all the way from 2 months in 1920 to 14 months in 1929. While there is no sign of any immediate vulnerabilitY,I continue to ad- lv\lorcicaete raiseca,Iutiloouoks afottritaudpeo.sAsifbteler rsoemtuernfutrothethre time and possiblYosom level beI'o''F' e t hfue r ther lnnO a.u TIr;s If nct reS1Jme ri (ofIJtruea offer or so.lldt,',on of offers to buy or lell F rl't'ttIn6JlitJPfJd-fN1'.I.!..fasWalllomndU&erCoof, oflrTf.o!IrIImV aptlloHnIMornlytherHeofI,I may have an Int'rut In some or all of the SeCUrities me,ntloned herein The m Inr.ot Intended to foreclose Independent InQUirY upon information believed reliable but not necenar,iy complete, 15 not guar.!n ted on -VV-filJlJ.L V 0 0; v V. .1 -……-…………..