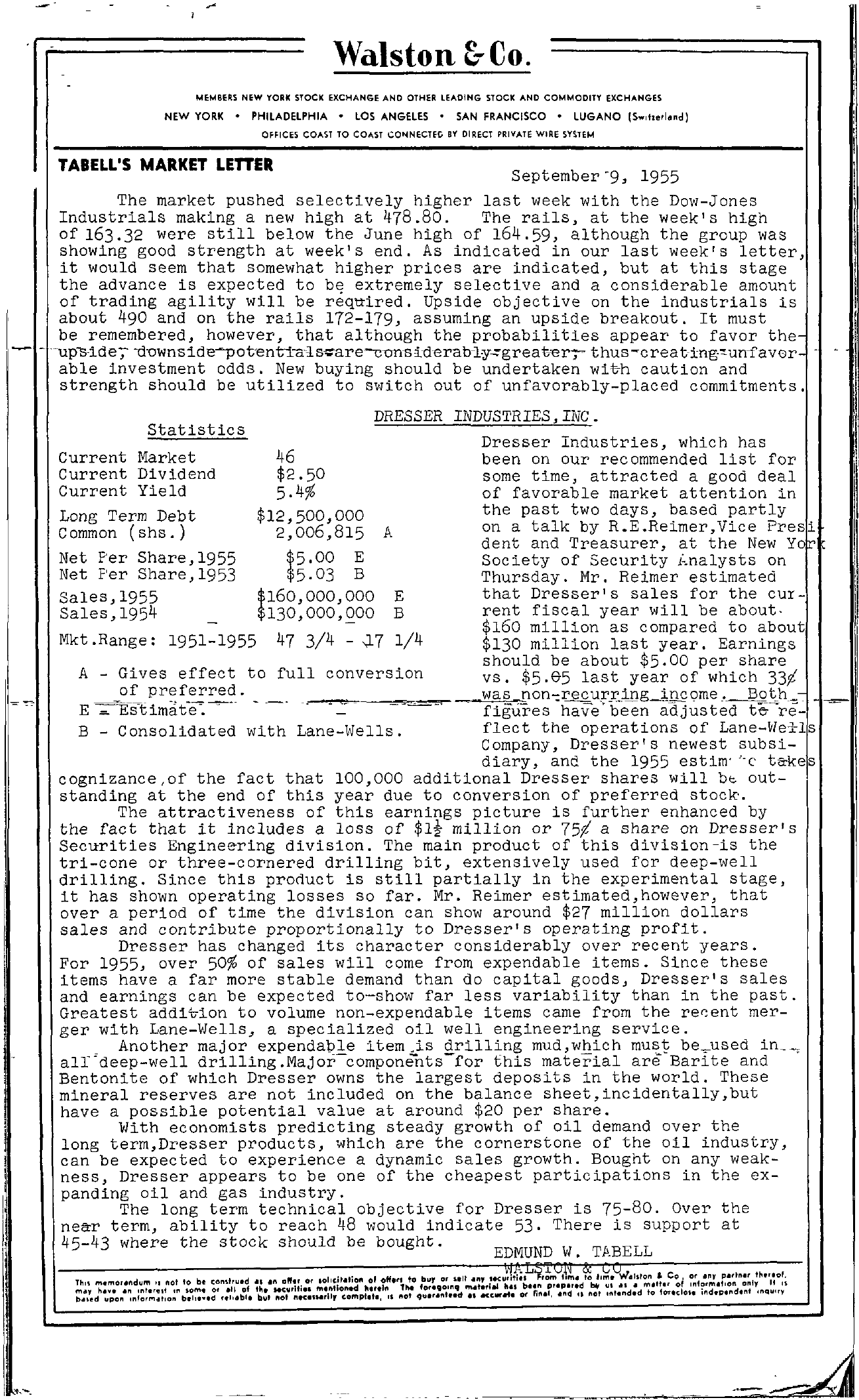 Walston &- Co. MEMBERS NEW YORK STOCK EXCHANGE AND OTHER LEADING STOCK AND COMMODITY EXCHANGES NEW YORK PHILADELPHIA LOS ANGELES SAN FRANCISCO LUGANO ISw,'wl.,d I COAST TO COAST CQ4NECTfC BY DIRECT PRI …..ATE WIRE SYSTEM TABELL'S MARKET LEnER September-9, 1955 The market pushed selectively higher last week with the Dow-Jones Industrials making a new high at 478.80. The rails, at the week's high of 163.32 were still below the June high of 164.59, although the group was showing good strength at week's end. As indicated in our last week's letter, I it would seem that somewhat higher prices are indicated, but at this stage the advance is expected to extremely selective and a considerable amount Iof trading agility will be reqttired. Upside objective on the industrials is ' about 490 and on the rails 172-179, assuming an upside breakout. It must i1 be remembered, however, that although the probabilities appear to favor the- –upll-ide7 -duwnside-pot-entialsre-cun-siderab-ly—great-er;– thus-creat-ing-unfavor- – – .I able investment odds. New buying should be undertaken caution and Istrength should be utilized to switch out of unfavorably-placed commitments. Statistics DRESSER INDUSTRIES,INC. Dresser Industries, which has I Current Market Current DiVidend 46 2.50 been on our recommended list for some time, attracted a good deal I' Current Yield 5.4 of favorable market attention in Long Term Debt Common (shs.) 12,500,000 2,006,815 A the past two days, based partly on a talk by R.E.Reimer,Vice Presi dent and Treasurer, at the New Net Per Share,1955 5.00 E Society of Security on Net Per Share,1953 5.03 B Thursday. Mr. Reimer estimated Sales,1955 Sales,1954 160,000,000 E 130,000,200 B Mkt.Range 1951-1955 47 3/4 – 1/4 that Dresser's sales for the current fiscal year will be about160 million as compared to about 130 million last year. Earnings A – Gives effect to full conversion of preferred. E Kstimat-e-.—- – — – should be about 5.00 per share vs. 5.65 last year of which 331 was ..Don-recurl'-ingtncQme …-J2.Qth- figures have' been adjusted te-re- B – Consolidated with Lane-Wells. flect the operations of Company, Dresser's newest subsi- diary, and the 1955 estim' C takes cognizance ,of the fact that 100,000 additional Dresser shares will be out- standing at the end of this year due to conversion of preferred stock. The attractiveness of this earnings picture is further enhanced by the fact that it includes a loss of million or 751 a share on Dresser's Securities Engineering division. The main product of this division-is the tri-cone or three-cornered drilling bit, extensively used for deep-well drilling. Since this proctuct is still partially in the experimental stage, it has shown operating losses so far. Mr. Reimer estimated,however, that over a period of time the division can show around 27 million dollars sales and contribute proportionally to Dresser's operating profit. Dresser has changed its character considerably over recent years. For 1955, over 50 of sales will come from expendable items. Since these items have a far more stable demand than do capital goods, Dresser's sales and earnings can be expected to-show far less variability than in the past. Greatest to volume non-expendable items came from the mer- ger with Lane-ltJells, a specialized oil well engineering service. Another major expendable item.is drilling mud,which must drilling.Major-components-for this material are Barite and Bentonite of which Dresser owns the largest depOSits in the world. These mineral reserves are not included on the balance sheet,incidentally,but have a possible potential value at around 20 per share. With economists predicting steady growth of oil demand over the long term,Dresser products, which are the cornerstone of the oil industry, can be expected to experience a dynamic sales growth. Bought on any weak- ness, Dresser appears to be one of the cheapest participations in the ex- panding oil and gas industry. The long term technical objective for Dresser is 75-80. Over the term, ability to reach 48 would indicate 53. There is support at 45-43 where the stock should be bought. EDMUND VI. TABELL