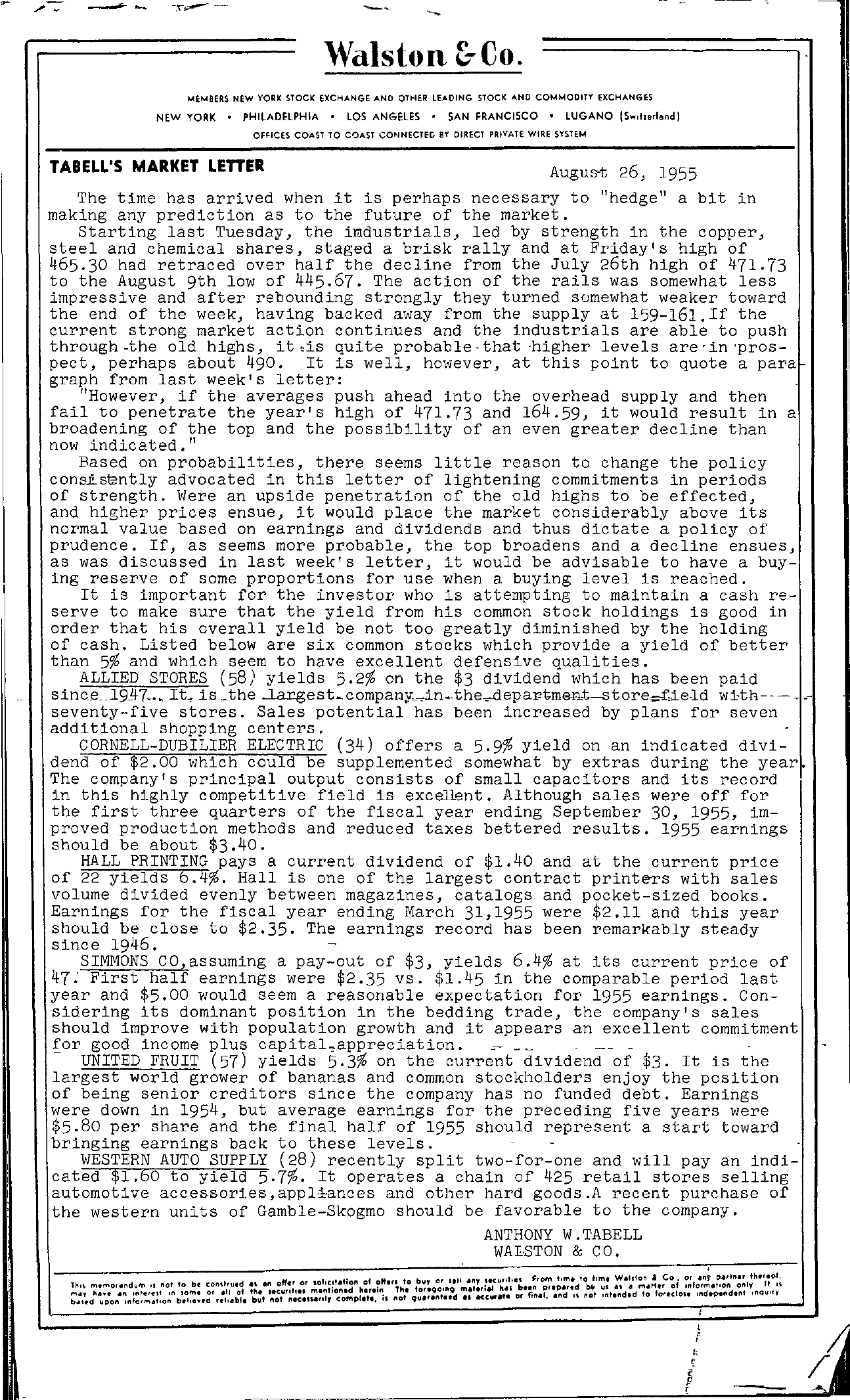 — Walston &Co. MEMBERS NEW YORK STOCK EXCHANGE AND OTHER LEAOING STOCK AND COMMODITY EXCHANGES NEW YORK PHILADELPHIA LOS ANGELES SAN FRANCISCO LUGANO (Sw,tmldl OfFICES COAST TO COAST COlNECTE-i BY DIRECT PRIVATE WIRE SYS.TEM TAB ELL'S MARKET LEnER Augus-t 26, 1955 The time has arrived when it is perhaps necessary to hedge a bit in making any prediction as to the future of the market. Starting last Tuesday, the imdustrials, led by strength in the copper, steel and chemical shares, staged a brisk rally and at Friday's high of 465.30 had retraced over half the decline from the July 26th high of 471.73 to the August 9th low of 445.67. The action of the rails was somewhat less impressive and after rebounding strongly they turned sumewhat weaker toward the end of the week, having backed away from the supply at 159-161.If the current strong market action continues and the industrials are able to push through-the old highs, it,is quite probable-that -higher levels are'in 'pros- pect, perhaps about 490. It is well, however, at this point to quote a para graph from last week's letter However, if the averages push ahead into the overhead supply and then fail to penetrate the year's high of 471.73 and 164.59, it would result in a broadening of the top and the possibility of an even greater decline than now indicated. Based on probabilities, there seems little reason to change the policy consLsently advocated in this letter of lightening commitments in periods of strength. Were an upside penetration of the old highs to be effected, and higher prices ensue, it would place the market considerably above its normal value based on earnings and dividends and thus dictate a policy of prudence. If, as seems more probable, the top broadens and a decline ensues, as was discussed in last week's letter, it would be advisable to have a buy- ing reserve of some proportions for use when a buying level is reached. It is important for the investor who is attempting to maintain a cash re- serve to make sure that the yield from his common stock holdings is good in order that his overall yield be not too greatly diminished by the holding of cash. Listed below are six common stocks which provide a yield of better than 5 and which seem to have excellent defenSive qualities. ALLIED STORES (58) yields 5.2 on the 3 dividend which has been paid .. , is the wi-th— seventy-five stores. Sales potential has been increased by plans for seven additional shopping centers. – CORNELL-DUBILIER ELECTRIC (34) offers a 5.9 yield on an indicated divi- dend of 2.00 which could be supplemented somewhat by extras during the year The company's principal output consists of small capacitors and its record in this highly competitive field is exceJlent. Although sales were off for the first three quarters of the fiscal year ending September 30, 1955, im- proved production methods and reduced taxes bettered results. 1955 earnings should be about 3.40. HALL PRINTING pays a current dividend of 1.40 and at the current price of 22 yields 6.4. Hall is one of the largest contract with sales volume divided evenly between magazines, catalogs and pocket-sized books. Earnings for the fiscal year ending March 31,1955 were 2.11 and this year should be close to 2.35. The earnings record has been remarkably steady since 1946. – SIMMONS CO, assuming a pay-out of 3, yields 6.4 at its current price of 47 First half earnings were 2.35 vs. 1.45 in the comparable period last year and 5.00 would seem a reasonable expectation for 1955 earnings. Con- sidering its dominant position in the bedding trade, the company's sales should improve with population growth and it appears an excellent commitment for good income plus capitalappreciation. – UNITED FRUIT (57) yields 5.3 on the current dividend of 3. It is the largest world grower of bananas and common stockholders enjoy the position of being senior creditors since the company has no funded debt. Earnings were down in 1954, but average earnings for the preceding five years were 5.80 per share and the final half of 1955 should represent a start toward bringing earnings back to these levels. — WESTERN AUTO SUPPLY (28) recently split two-for-one and will pay an indi- cated 1.60 to yield 5.7. It operates a chain of 425 retail stores selling automotive and other hard goods.A recent purchase of the western units of Gamble-Skogmo should be favorable to the company. ANTHONY W.TABELL WALSTON & CO. f