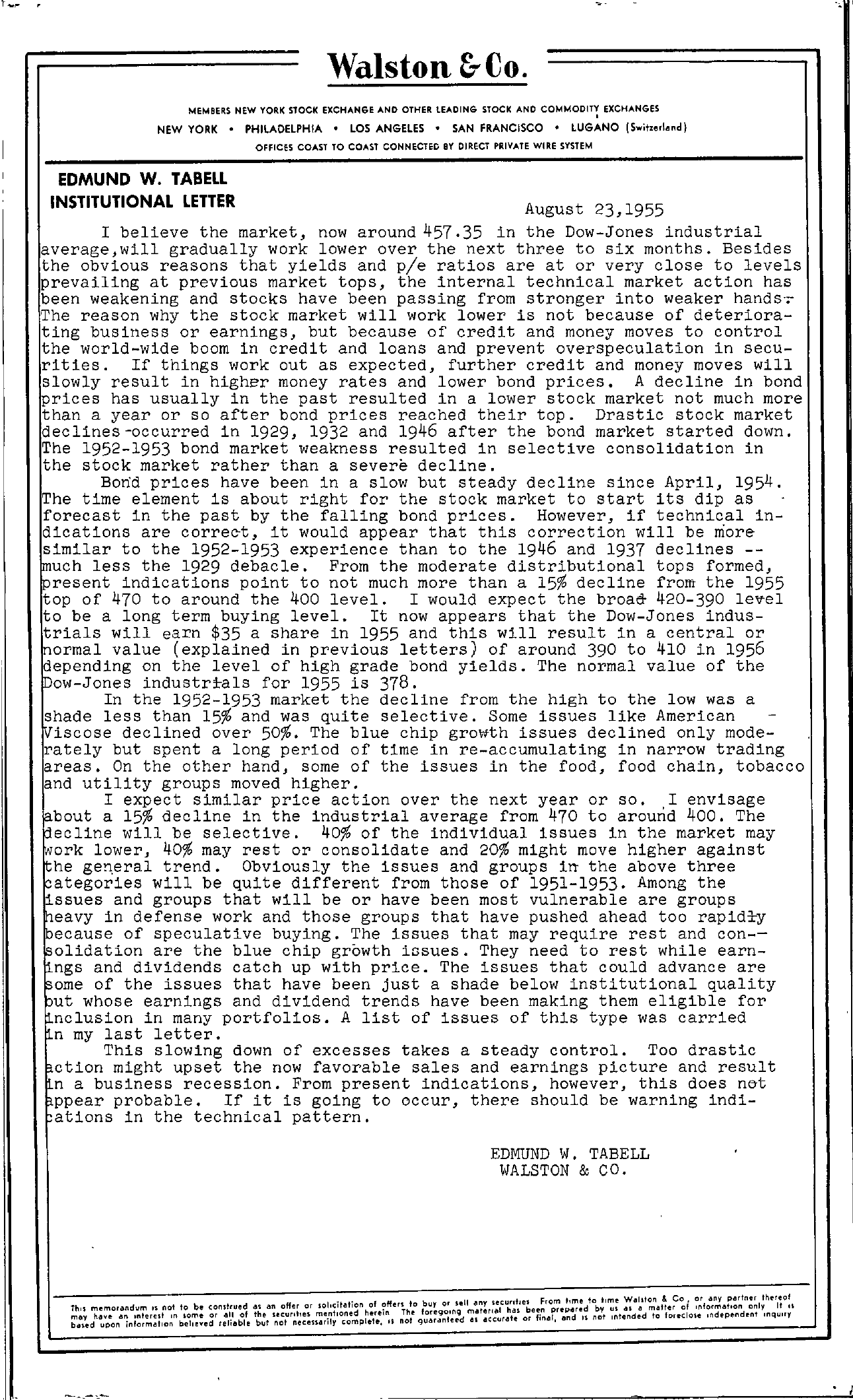 ,- . Walston &Co. MEMBERS NEW YORI( STOCK EXCHANGE AND OTHER LEADING STOCK AND COMMODITY EXCHANGES NEW YORK PHILADELPHIA LOS ANGELES SAN FRANCISCO LUGANO (Sw;t,Id) OFFICes COAST TO COAST CONHECTEC BY DIRECT PRIVATE WIRE SYSTEM EDMUND W. TABELL INSTITUTIONAL LETTER August 23,1955 I believe the market, now around 457.35 in the Dow-Jones industrial average,will gradually work lower over the next three to six months. Besides the obvious reasons that yields and pie ratios are at or very close to levels prevailing at previous market tops, the internal technical market action has been weakening and stocks have been passing from stronger into weaker The reason why the stock market will work lower is not because of deteriorating business or earnings, but because of credit and money moves to control the world-wide boom in credit and loans and prevent overspeculation in securities. If things work out as expected, further credit and money moves will slowly result in higher money rates and lower bond prices. A decline in bond prices has usually in the past resulted in a lower stock market not much more than a year or so after bond prices reached their top. Drastic stock market declines-occurred in 1929, 1932 and 1946 after the bond market started down. The 1952-1953 bond market weakness resulted in selective consolidation in the stock market rather than a severe decline. Bond prices have been in a slow but steady decline since April, 1954. The time element is about right for the stock market to start its dip as forecast in the past by the falling bond prices. However, if technical indications are correct, it would appear that this correction will be more similar to the 1952-1953 experience than to the 1946 and 1937 declines — less the 1929 debacle. From the moderate distributional tops formed, present indications point to not much more than a 15 decline from the 1955 top of 470 to around the 400 level. I would expect the broafr 420-390 level to be a long term buying level. It now appears that the Dow-Jones industrials will earn 35 a share in 1955 and this will result in a central or normal value (explained in previous letters) of around 390 to 410 in 1956 depending on the level of high grade bond yields. The normal value of the pow-Jones industrials for 1955 is 378. In the 1952-1953 market the decline from the high to the low was a shade less than 15 and was quite selective. Some issues like American – declined over 50. The blue chip growth issues declined only moderately but spent a long period of time in re-accumulating in narrow trading areas. On the other hand, some of the issues in the food, food chain, tobacco and utility groups moved higher. I expect similar price action over the next year or so. I envisage about a 15 decline in the industrial average from 470 to around 400. The decline will be selective. 40 of the individual issues in the market may work lower, 40 may rest or consolidate and 20 might move higher against the trend. Obviously the issues and groups in the above three categories will be quite different from those of 1951-1953. Among the issues and groups that will be or have been most vulnerable are groups reavy in defense work and those groups that have pushed ahead too rapidry of speculative buying. The issues that may require rest and con-are the blue chip growth iGsues. They need to rest while earn- and dividends catch up with price. The issues that could advance are of the issues that have been just a shade below institutional quality put whose earnings and dividend trends have been making them eligible for in many portfolios. A list of issues of this type was carried n my last letter. This slowing down of excesses takes a steady control. Too drastic might upset the now favorable sales and earnings picture and result n a business recession. From present indications, however, this does net fPpear probable. If it is going to occur, there should be warning indiations in the technical pattern. EDMUND W. TABELL WALSTON & CO. .. b II n teel/nflU From hme to time Wills/on & Co, or ny partner thereof 1h' memorandum II not to be condrued as an offer or sohcltatlon of offers to u.,. or Ie / I has been prepared by UI .u matter of Informatoon only II IS may have an ,nterest In lome or all of the securities mentioned herein The ma rte or finl/ll and n not Intended to forecleu! ,ndependent onqulrY b.ued upon information believed reliable but not neceuuily complele, 1 not quaran ee u a u , .I