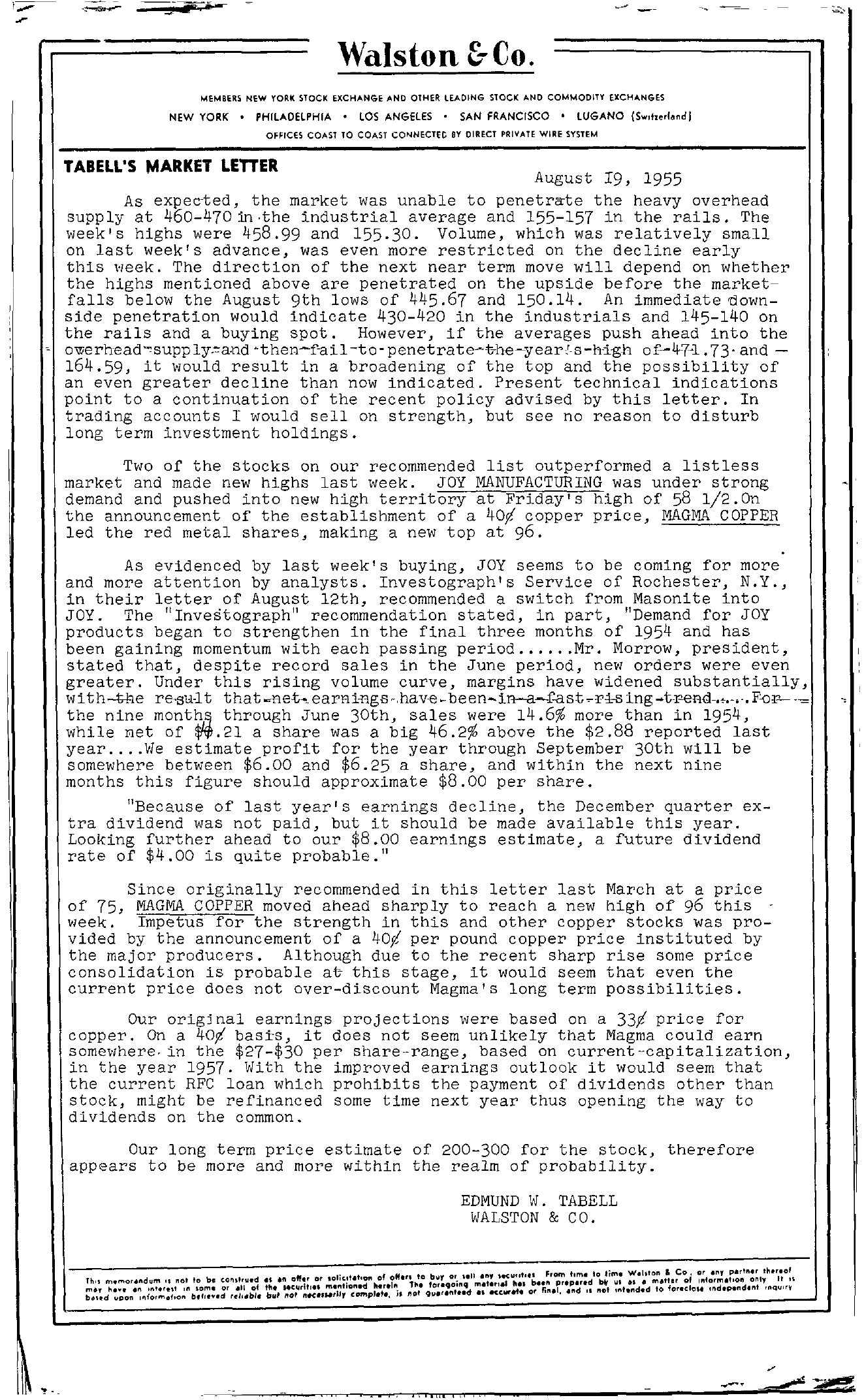 ..– or Walston &Co. MEMBERS NEW VORK STOCK EXCHANGE AND OTHER LEADING STOCK AND COMMODITY EXCHANGES NEW YORK PHILADELPHIA LOS ANGELES SAN FRANCISCO LUGANO (Sw,lwld I OFFices COAST TO COAST BY DIRECT PRIVATE WIRE SYSTEM TABELL'S MARKET LEnER August I9, 1955 As the market was unable to penetrate the heavy overhead supply at 460-470in.the industrial average and 155-157 in the rails. The week's highs were 458.99 and 155.30. Volume, which was relatively small on last week's advance, was even more restricted on the decline early this 1leek. The direction of the next near term move will depend on whether the highs mentioned above are penetrated on the upside before the market- falls below the August 9th lows of 445.67 and 150.14. An immediate uown- side penetration would indicate 430-420 in the industrials and 145-140 on the rails and a buying spot. However, if the averages push ahead into the owerhead-supplyoa-nd -then-f-ail-to- of-4-7-1. 73' and – 164.59, it would result in a broadening of the top and the possibility of an even greater decline than now indicated. Present technical indications point to a continuation of the recent policy advised by this letter. In trading accounts I would sellon strength, but see no reason to disturb long term investment holdings. Two of the stocks on our recommended list outperformed a listless market and made new highs last week. JOY MANUFACTURING was under strong demand and pushed into new high territory at Friday's high of 58 1/2.0n the announcement of the establishment of a 401 copper price, MAGMA COPPER led the red metal shares, making a new top at 96. As evidenced by last week's buying, JOY seems to be coming for more and more attention by analysts. Investograph's Service of Rochester, N.Y., in their letter of August 12th, recommended a switch from Masonite into JOY. The Investograph recommendation stated, in part, Demand for JOY products began to strengthen in the final three months of 1954 and has been gaining momentum with each passing period …… Mr. Morrow, president, stated that, despite record sales in the June period, new orders were even greater. Under this rising volume curve, margins have widened substantially, with-tfle re-su-lt been-in–a-fast-pi-s ing -tFend-.-.-. F-or- – the nine monthA through June 30th, sales were 14.6 more than in 1954, while net of a share was a big 46.2 above the 2.88 reported last year …. V1e estimate profit for the year through September 30th will be somewhere between 6.00 and 6.25 a share, and within the next nine months this figure should approximate 8.00 per share. Because of last year's earnings decline, the December quarter extra dividend was not paid, but it should be made available this year. Looking further ahead to our 8.00 earnings estimate, a future dividend rate of 4.00 is quite probable. , Since originally recommended in this letter last March at a price of 75, MAGMA COPPER moved ahead sharply to reach a new high of 96 this week. Impetus for the strength in this and other copper stocks was pro- vided by the announcement of a 401 per pound copper price instituted by the major producers. Although due to the recent sharp rise some price consolidation is probable this stage, it would seem that even the current price does not over-discount Magma's long term possibilities. Our copper. On ori a g40j n1 a l earnings projections were based on a 331 price for it does not seem unlikely that Magma could earn some11here in the 27-30 per share-orange, based on current-capitalization, in the year 1957. With the improved earnings outlook it would seem that the current RFC loan which prohibits the payment of dividends other than stock, might be refinanced some time next year thus opening the way to dividends on the common. Our long term price estimate of 200-300 for the stock, therefore appears to be more and more within the realm of probability. EDMUND W. TABELL WALSTON & CO. ' – – i 'Ita (