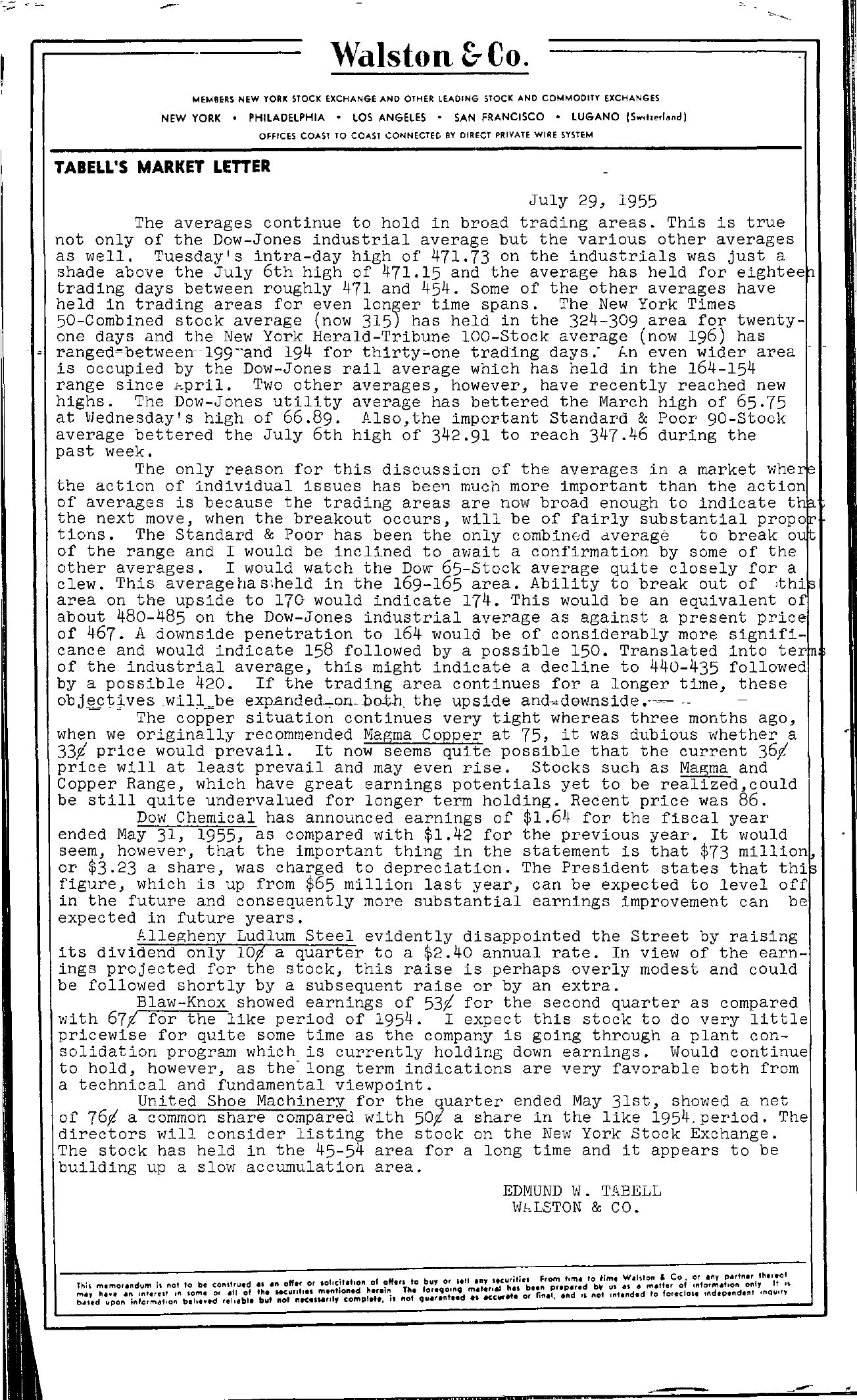 Walston &- Co. MEMBERS NEW YORK STOCK EXCHANGE AND OTHER LEADING STOCK AND COMMODITY EXCHANGES NEW YORK PHILADELPHIA LOS ANGELES SAN FRANCISCO LUGANO (Sw,'wld) OFFICES COAST TO COAST COlNECTfC BY DIRECT PRIVATE WIRE SYSTEM TABEll'S MARKET lETTER July 29, 1955 The averages continue to hold in broad trading areas. This is true not only of the Dow-Jones industrial average but the various other averages as well. Tuesday's intra-day high of 471.73 on the industrials was just a shade above the July 6th high of 471.15 and the average has held for eighteep trading days between roughly 471 and 454. Some of the other averages have held in trading areas for even longer time spans. The New York Times 50-Combined stock average (now 315) has held in the 324-309 area for twenty- one days and the New York Herald-Tribune 100-Stock average (now 196) has rangeo.between–199–and 194 for th1rty'-one trad-ing days.- J.n even wider area – – is occupied by the Dow-Jones rail average which has held in the 164-154 range since Two other averages, however, have recently reached new highs. The Dow-Jones utility average has bettered the March high of 65.75 at liJednesday' s high of 66.89. Also, the important Standard & Poor 90-Stock average bettered the July 6th high of 342.91 to reach 347.46 during the past week. The only reason for this discussion of the averages in a market the action of individual issues has been much more important than the action of averages is because the trading areas are now broad enough to indicate the next move, when the breakout occurs, will be of fairly substantial tions. The Standard & Poor has been the only combined dverage to break ou of the range and I would be inclined to aviai t a confirmation by some of the other averages. I would watch the Dow 65-Stock average quite closely for a clew. This average ba s;held in the 169-165 area. Ability to break out of ,this area on the upside to 170 would indicate 174. This would be an equivalent of about 480-485 on the Dow-Jones industrial average as against a present price of 467. A downside penetration to 164 would be of considerably more signifi- cance and would indicate 158 followed of the industrial average, this might by a possible 150. indicate a decline Ttora4n4s0la-4te3d5 into tern followed by a possible 420. If the trading area continues for a longer time, these expanded..,.oll.both the upside — – The copper situation continues very tight whereas three months ago, when we originally recommended Magma Copper at 75, it was dubious whether a price would prevail. It now seems quite possible that the current price will at least prevail and may even rise. Stocks such as Magma and Copper Range, which have great earnings potentials yet to be realized,could be still quite undervalued for longer term holding. Recent price was 86. Dow Chemical has announced earnings of 1.64 for the fiscal year ended May 31, 1955, as compared with 1.42 for the previous year. It would seem, however, that the important thing in the statement is that 73 or 3.23 a share, was charged to depreciation. The President states that figure, which is up from 65 million last year, can be expected to level off in the future and consequently more substantial earnings improvement can be expected in future years. Allegheny Ludlum Steel evidently disappointed the Street by raising its dividend only 101 a quarter to a 2.40 annual rate. In view of the earn- ings projected for the stock, this raise is perhaps overly modest and could be followed shortly by a subsequent raise or by an extra. Blaw-Knox showed earnings of for the second quarter as compared with 67;i for the like period of 1954. I expect this stock to do very little pricewise for quite some time as the company is going through a plant con- solidation program which is currently holding down earnings. 1JJould continue to hold, however, as the- long term indications are very favorable both from a technical and fundamental viewpoint. of a United Shoe Machinery common share compared fworiththe50qt uaa rter shar ended e in May 31st, showed the like 1954peri a net od. The directors will consider listing the stock on the New York Stock Exchange. The stock has held in the 45-54 area for a long time and it appears to be building up a slow accumulation area. EDMUND VI. TABELL 1,oIhLSTON & CO.