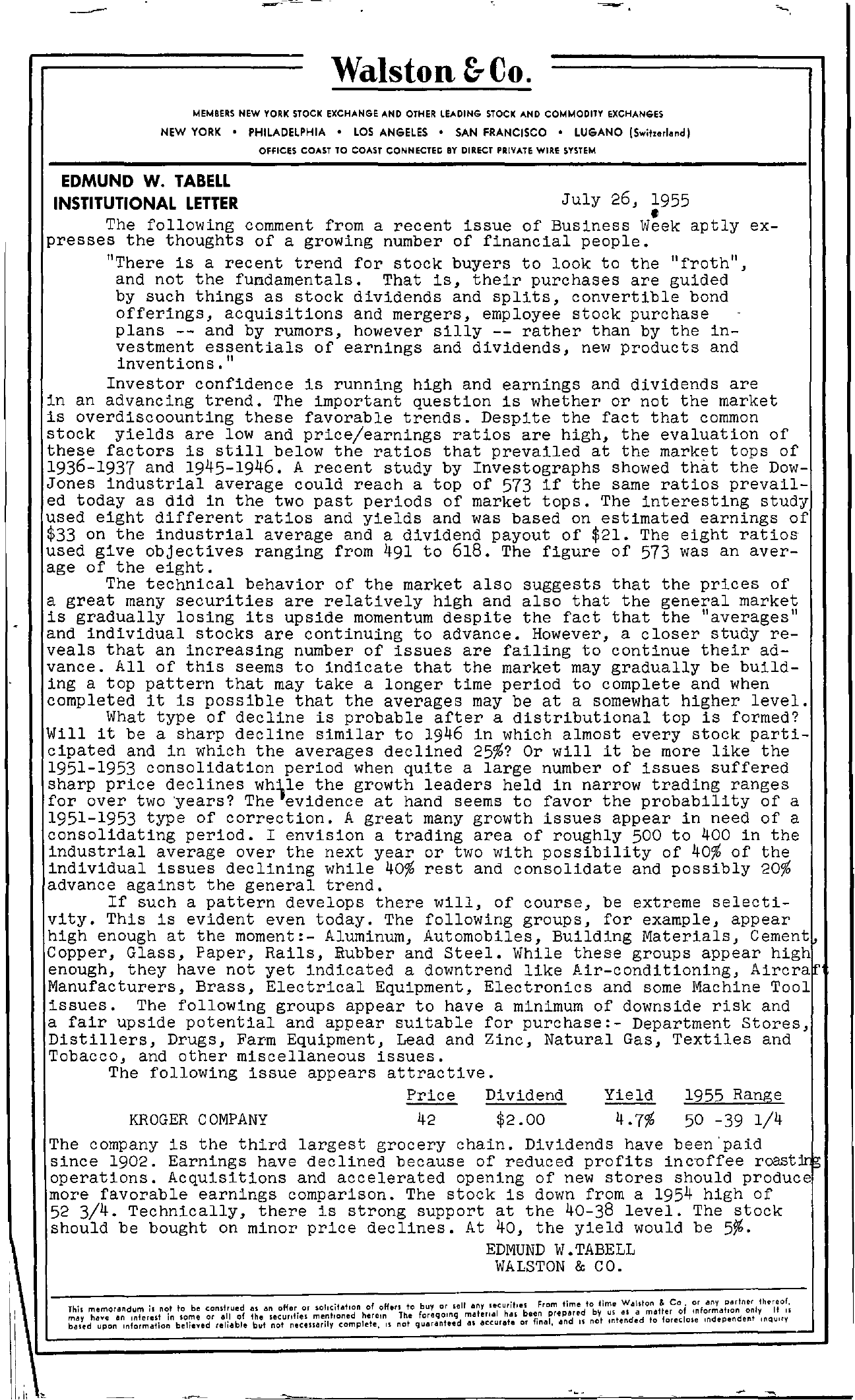 —– Walston 5- Co. MEMBERS NEW YORK STOCK EXCHANGE AND OTHER LEADING STOCK AND COMMODITY EXCHANGES NEW YORK PHILADELPHIA LOS ANGELES SAN FRANCISCO LUGANO (Swamld I OFFICES COAST TO COAST CONNECTEC BY DIRECT PRIVATE WIRE SYSTEM EDMUND W. TABELL INSTITUTIONAL LETTER July 26, 1955 The following comment from a recent issue of Business Week aptly ex- presses the thoughts of a growing number of financial people. There is a recent trend for stock buyers to look to the froth, and not the fUfldamentals. That is, their purchases are guided by such things as stock dividends and splits, convertible bond offerings, acquisitions and mergers, employee stock purchase plans — and by rumors, however silly — rather than by the investment essentials of earnings and dividends, new products and inventions. Investor confidence is running high and earnings and dividends are in an advancing trend. The important question is whether or not the market is overdiscoounting these favorable trends. Despite the fact that common stock yields are low and price/earnings ratios are high, the evaluation of these factors is still below the ratios that prevailed at the market tops of 1936-1937 and 1945-1946. A recent study by Investographs showed that the DowJones industrial average could reach a top of 573 if the same ratios prevailed today as did in the two past periods of market tops. The interesting study used eight different ratios and yields and was based on estimated earnings of 33 on the industrial average and a dividend payout of 21. The eight ratios used give objectives ranging from 491 to 618. The figure of 573 was an average of the eight. The technical behavior of the market also suggests that the prices of a great many securities are relatively high and also that the general market is gradually losing its upside momentum despite the fact that the averages and individual stocks are continuing to advance. However, a closer study reveals that an increasing number of issues are failing to continue their advance. All of this seems to indicate that the market may gradually be building a top pattern that may take a longer time period to complete and when completed it is possible that the averages may be at a somewhat higher level. What type of decline is probable after a distributional top is formed Will it be a sharp decline similar to 1946 in which almost every stock participated and in which the averages declined 25 Or will it be more like the 1951-1953 consolidation period when quite a large number of issues suffered sharp price declines wh1le the growth leaders held in narrow trading ranges for over two 'years The evidence at hand seems to favor the probability of a 1951-1953 type of correction. A great many growth issues appear in need of a consolidating period. I envision a trading area of roughly 500 to 400 in the industrial average over the next year or two with possibility of 40 of the individual issues declining while 40 rest and consolidate and possibly 20 advance against the general trend. If such a pattern develops there will, of course, be extreme selectivity. This is evident even today. The following groups, for example, appear high enough at the moment- Aluminum, Automobiles, Building Materials, Cement Copper, Glass, Paper, Rails, Rubber and Steel. While these groups appear high enough, they have not yet indicated a downtrend like Air-conditioning, Aircrar Manufacturers, Brass, Electrical Equipment, Electronics and some Machine Tool issues. The following groups appear to have a minimum of downside risk and a fair upside potential and appear suitable for purchase- Department Stores, Distillers, Drugs, Farm Equipment, Lead and Zinc, Natural Gas, Textiles and Tobacco, and other miscellaneous issues. The following issue appears attractive. Price Dividend Yield 1955 Range KROGER COMPANY 42 2.00 4.7 50 -39 1/4 The company is the third largest grocery chain. Dividends have been 'paid since 1902. Earnings have declined because of reduced profits incuffee operations. Acquisitions and accelerated opening of new stores should produce more favorable earnings comparison. The stock is down from a 1954 high of 52 3/4. Technically, there is strong support at the 40-38 level. The stock should be bought on minor price declines. At 40, the yield would be 5. EDMUND W.TABELL WALSTON & CO. Thh memorandum is not to be construed ,as an offer or sollcilatlon 0f offetl to buy or se II any 't U!CUri lei From timedtob times Ws aaldomnat&terCooj otnr foarnmy ahpaorntnoernlythreIIofI,i may have an Interut in lome or all of the sec uri lies menhoned herein The foreqOlng material h,1!U betn t 10 foreclose Independent Inquiry baled upon Information believed reliable but not necenarily complete, IS not guaranteed as accura e or Ina. an II n I 1,1 t. -.-