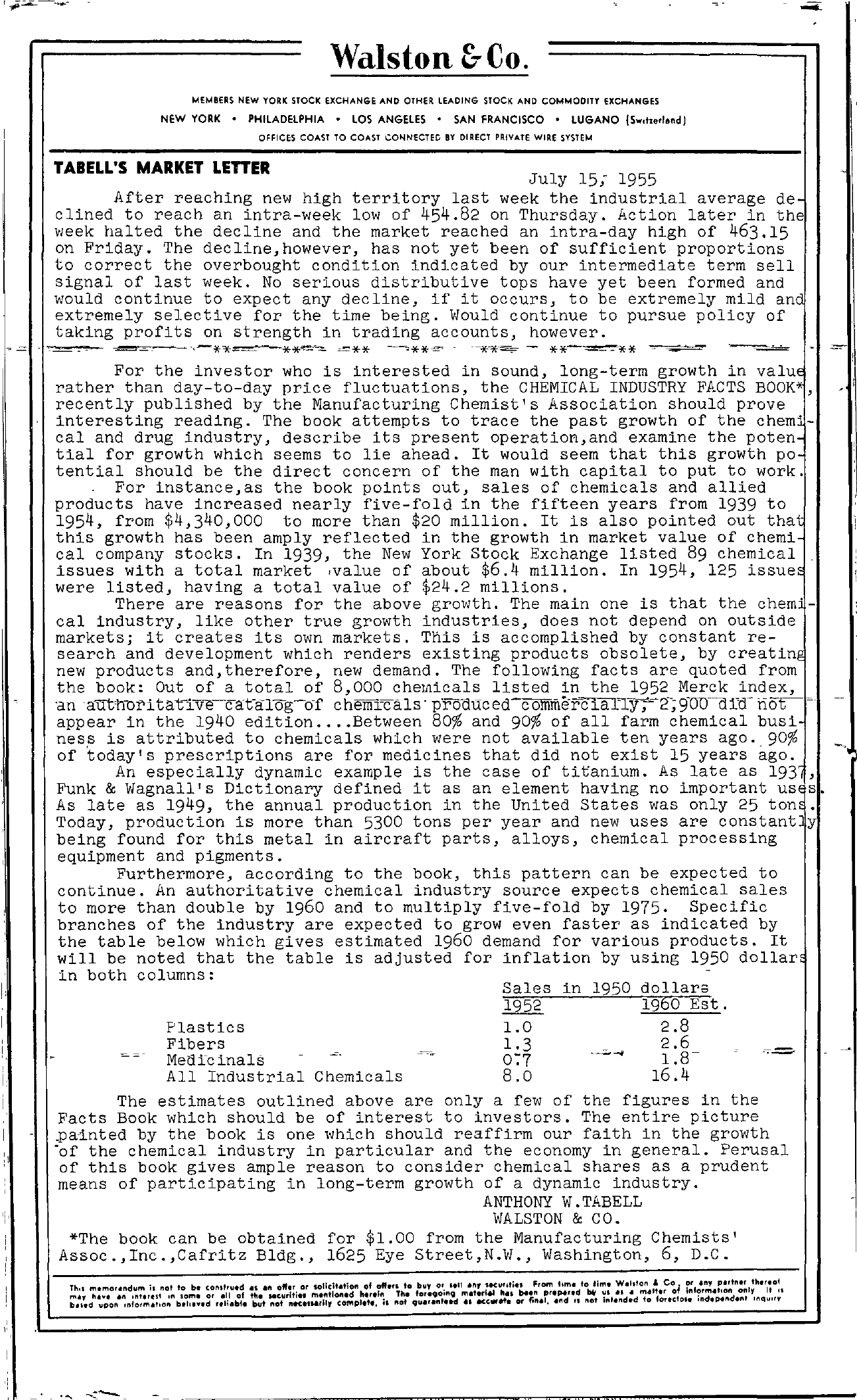 Walston &- Co. MEt.iBERS NEW YORK STOCK EXCHANGE AND OTHER LEADING STOCK AND COMMODITY EXCHANGES NEW YORK PHILADELPHIA LOS ANGELES SAN FRANCISCO LUGANO (Swle'I..d) OFFICES COAST TO COAST BY DIRECT PRIVATE WIRE SYSTEM TABELL'S MARKET LETTER July 15; 1955 After reaching new high territory last week the industrial average de- clined to reach an intra-week low of 454.82 on Thursday. Action later in the week halted the decline and the market reached an intra-day high of 463.15 on Friday. The decline,however, has not yet been of sufficient proportions to correct the overbought condition indicated by our intermediate term sell signal of last week. No serious distributive tops have yet been formed and would continue to expect any decline, if it occurs, to be extremely mild and extremely selective for the time being. Would continue to pursue policy of taking profits on strength in trading accounts, however. … . .!'' —2' For the investor who is interested in sound, long-term growth in valuE rather than day-to-day price fluctuations, the CHEMICAL INDUSTRY FACTS recently published by the Manufacturing Chemist's Association should prove interesting reading. The book attempts to trace the past growth of the chemi- cal and drug industry, describe its present operation,and examine the poten- tial for growth which seems to lie ahead. It would seem that this growth po- tential should be the direct concern of the man with capital to put to work. For instance,as the book pOints out, sales of chemicals and allied products have increased nearly five-fold in the fifteen years from 1939 to 1954, from 4,340,000 to more than 20 million. It is also pointed out that this growth has been amply reflected in the growth in market value of chemi cal company stocks. In 1939, the New York Stock Exchange listed 89 chemical issues with a total market ,value of about 6.4 million. In 1954, 125 issue, were listed, having a total value of 24.2 millions. There are reasons for the above growth. The main one is that the chem'- cal industry, like other true growth industries, does not depend on outside markets; it creates its own markets. This is accomplished by constant re- search and development which renders existing products obsolete, by creatin new products and,therefore, new demand. The following facts are quoted from the book Out of a total of 8,000 chemicals listed in the 1952 Merck index, -anaiIthllritat1ve-cannog-o-f chemrcals -prodUced-commerClaTly, -2-;9-0Dara- not- appear in the 1940 ness is attributed edition ….Between to chemicals which 80 and 90 of all were not available farm chemical ten years ago. b9u0si- of today's prescriptions are for medicines An especially dynamic example is the that case did of not titan exist 15 ium. As l yea ate rs as ag1o9.3, Funk & v As late a as gn1a9l4l9' s, Dictionary the annual defined it production as in an element the United having States no was imonployrt2a5n t USE ton, S . . Today, production is more than 5300 tons per year and new uses are constant y being found for this metal in aircraft parts, alloys, chemical processing equipment and pigments. Furthermore, according to the book, this pattern can be expected to continue. An authoritative chemical industry source expects chemical sales to more than double by 1960 and to multiply five-fold by 1975. Specific branches of the industry are expected to grow even faster as indicated by the table below which gives estimated 1960 demand for various products. It will be noted that the table is adjusted for inflation by using 1950 dollar in both columns Sales 1952 in 1950 dollars- 1960 Est. Plastics Fibers Medi-cinals – All Industrial Chemicals 1.0 10.73 8.0 2.8 2.6 1.8- 16.4 The estimates outlined above are only a few of the figures in the Facts Book which should be of interest to investors. The entire picture – pa1.nted by the book is one which should reaffirm our faith in the growth -of the chemical industry in particular and the economy in general. Perusal of this book gives ample reason to consider chemical shares as a prudent means of participating in long-term growth of a dynamic industry. ANTHONY W.TABELL WALSTON & CO. The book can be obtained for 1.00 from the Manufacturing Chemists' Assoc.,Inc.,Cafritz Bldg., 1625 Eye Street,N.W., viashington, 6, D.C. I,