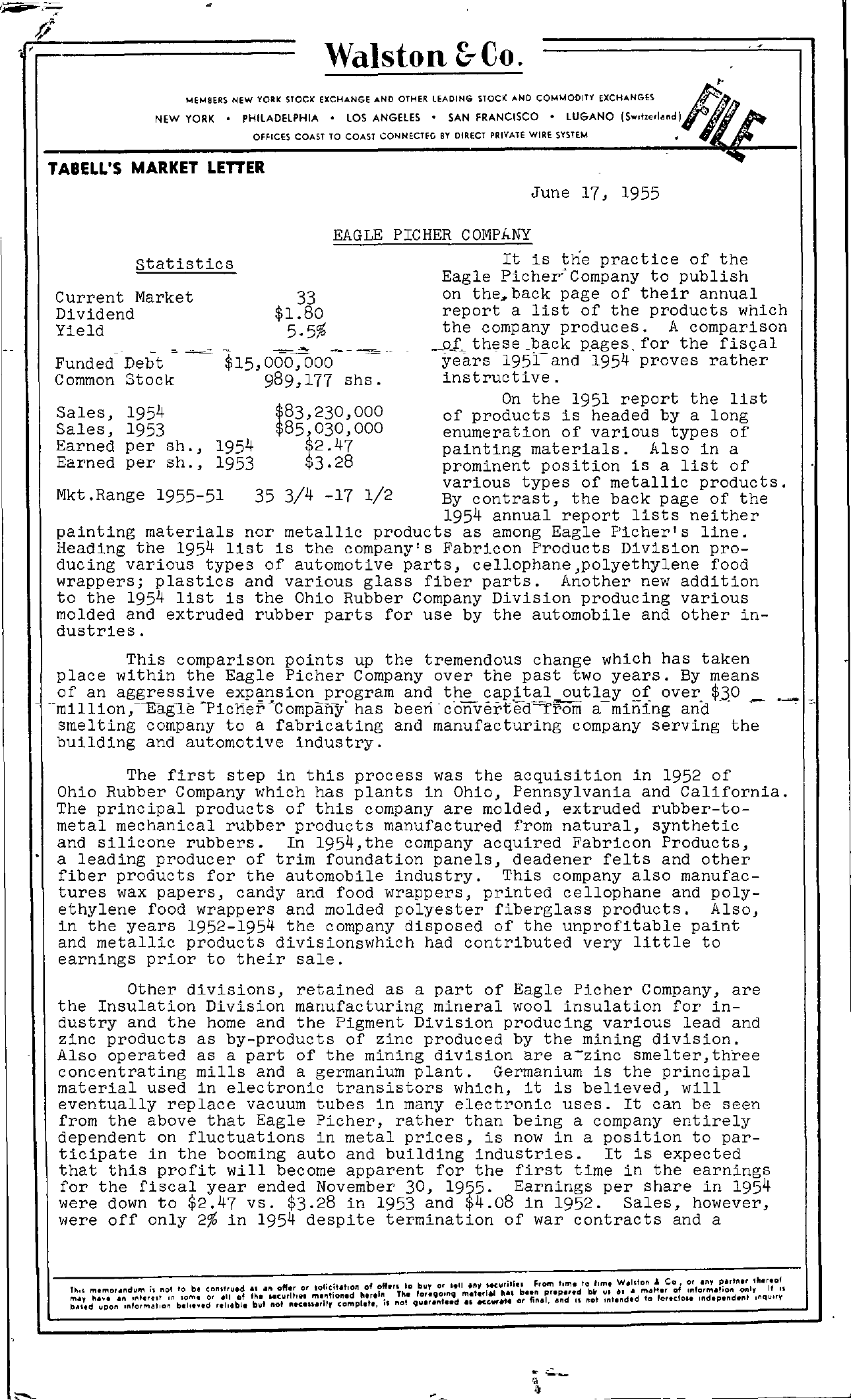 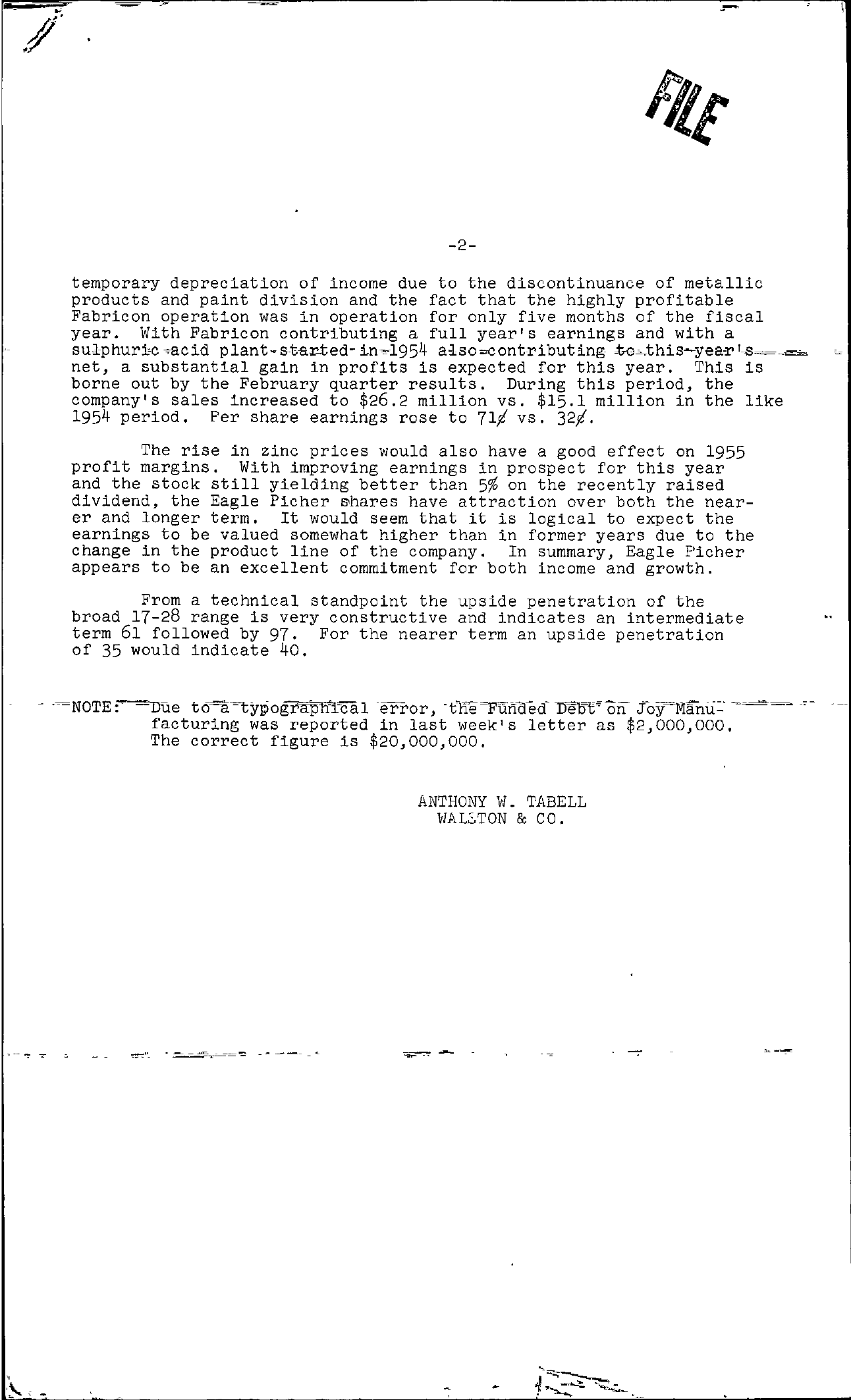 ., Walston &Co . ,. MEMBERS NEW YORK STOCK eXCHANGE ANO OTHER LEADING STOCK AND COMMODITY EXCHANGES NEW YORK PHILADElPHIA LOS ANGELES SAN FRANCISCO LUGANO (Sw,',IdJr rA OFFICES COAST TO COAST CONNECTfG BY DIRECT PRIVATE WIRE SYSTEM TABELL'S MARKET LEnER June 17, 1955 EAGLE PICHER COMPhNY statistics It is the practice of the Eagle PicherCompany to publish Current Market Dividend Yield Funded Debt Common Stock 33 1.80 5.5 –.- 15,000,000 989,177 shs. on page of their annual report a list of the products which the company produces. A comparison oL these .back pages, for the fiscal years 1951-and 1954 proves rather instructive. Sales, 1954 Sales, 1953 Earned per sh., Earned per sh., 83,230,000 85,030,000 2.47 3.28 On the 1951 report the list of products is headed by a long enumeration of various types of painting materials. Also in a prominent position is a list of Mkt.Range 1955-51 various types of metallic products. By contrast, the back page of the 1954 annual report lists neither painting materials nor metallic products as among Eagle Picher's line. Heading the 1954 list is the company's Fabricon Products Division pro- ducing various types of automotive parts, cellophane,polyethylene food wrappers; plastics and various glass fiber parts. Another new addition to the 1954 list is the Ohio Rubber Company Division producing various molded and extruded rubber parts for use by the automobile and other in- dustries. This comparison pOints up the tremendous change which has taken place within the Eagle Picher Company over the past two years. By means of an aggressive – –m111ion,–Eag-le expansion program and has been the capital o utala-my inolfngovaenrd 30 – — smelting company to a fabricating and manufacturing company serving the building and automotive industry. The first step in this process was the acquisition in 1952 of Ohio Rubber Company which has plants in Ohio, Pennsylvania and California. The principal products of this company are molded, extruded rubber-tometal mechanical rubber products manufactured from natural, synthetic and silicone rubbers. In 1954,the company acquired Fabricon Products, a leading producer of trim foundation panels, deadener felts and other fiber products for the automobile industry. This company also manufactures wax papers, candy and food wrappers, printed cellophane and polyethylene food wrappers and molded polyester fiberglass products. Also, in the years 1952-1954 the company disposed of the unprofitable paint and metallic products divisionswhich had contributed very little to earnings prior to their sale. Other divisions, retained as a part of Eagle Picher Company, are the Insulation Division manufacturing mineral wool insulation for industry and the home and the Pigment Division producing various lead and zinc products as by-products of zinc produced by the mining division. Also operated as a part of the mining division are a-zinc smelter,three concentrating mills and a germanium plant. Germanium is the principal material used in electronic transistors which, it is believed, will eventually replace vacuum tubes in many electronic uses. It can be seen from the above that Eagle Picher, rather than being a company entirely dependent on fluctuations in metal prices, is now in a position to participate in the booming auto and building industries. It is expected that this profit will become apparent for the first time in the earnings for the fiscal year ended November 30, 1955. Earnings per share in 1954 were down to 2.47 vs. 3.28 in 1953 and 4.08 in 1952. Sales, however, were off only 2 in 1954 despite termination of war contracts and a .. -2- temporary depreciation of income due to the discontinuance of metallic products and paint division and the fact that the highly profitable Fabricon operation was in operation for only five months of the fiscal year. With Fabricon contributing a full year's earnings and with a sulphuric ..acid plant- I,S net, a substantial gain in profits is expected for this year. This is borne out by the February quarter results. During this period, the company's sales increased to 26.2 million vs. 15.1 million in the like 1954 period. Per share earnings rose to 711 vs. 321. The rise in zinc prices would also have a good effect on 1955 profit margins. With improving earnings in prospect for this year and the stock still yielding better than 5 on the recently raised dividend, the Eagle Picher shares have attraction over both the nearer and longer term. It would seem that it is logical to expect the earnings to be valued somewhat higher than in former years due to the change in the product line of the company. In summary, Eagle Picher appears to be an excellent commitment for both income and growth. From a technical standpoint the upside penetration of the broad 17-28 range is very constructive and indicates an intermediate term 61 followed by 97. For the nearer term an upside penetration of 35 would indicate 40. – Due J-oy Manu facturing was reported in last week's letter as 2,000,000. The correct figure is 20,000,000. ANTHONY VI. TABELL vIAL,sTON & CO. '-