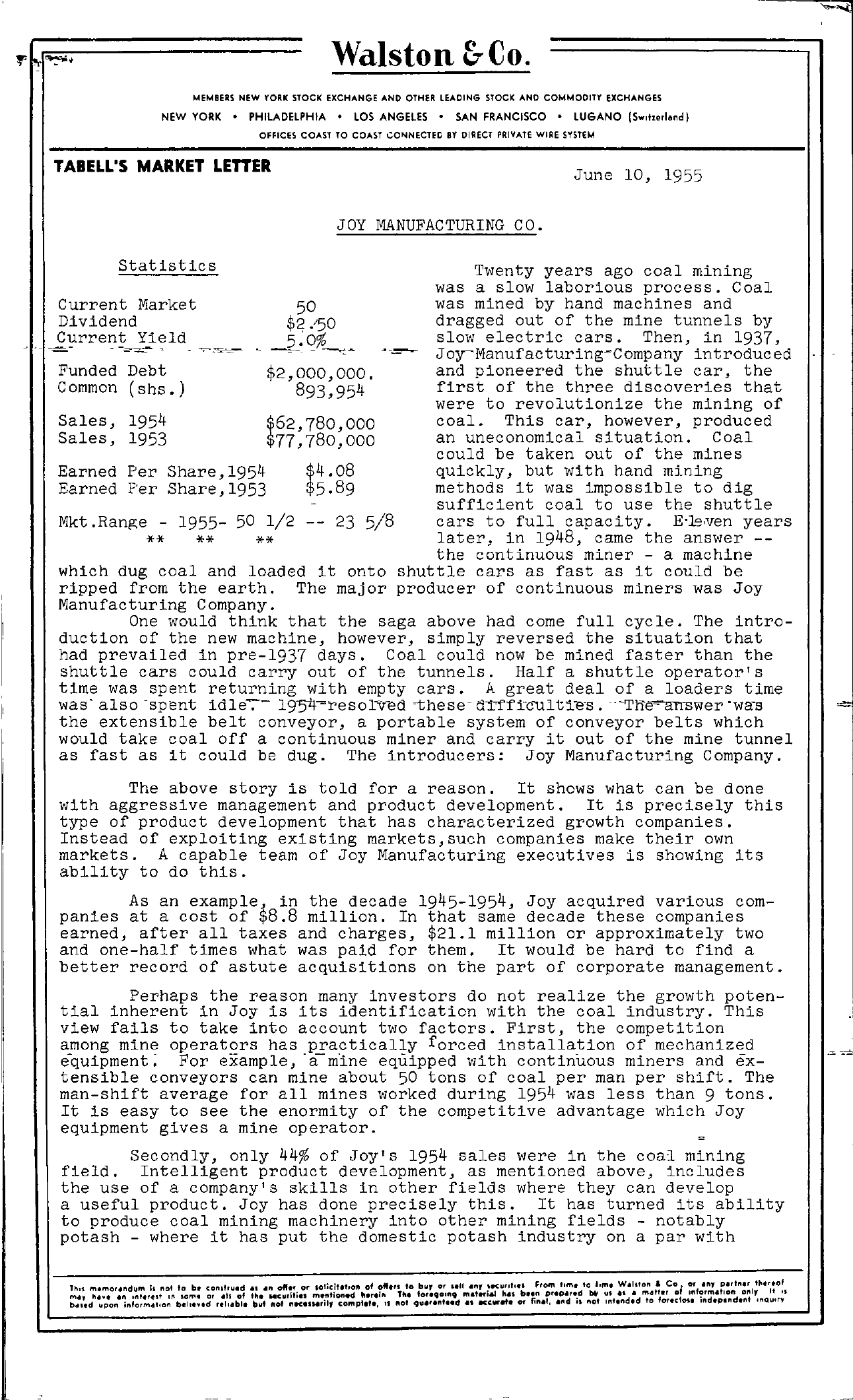 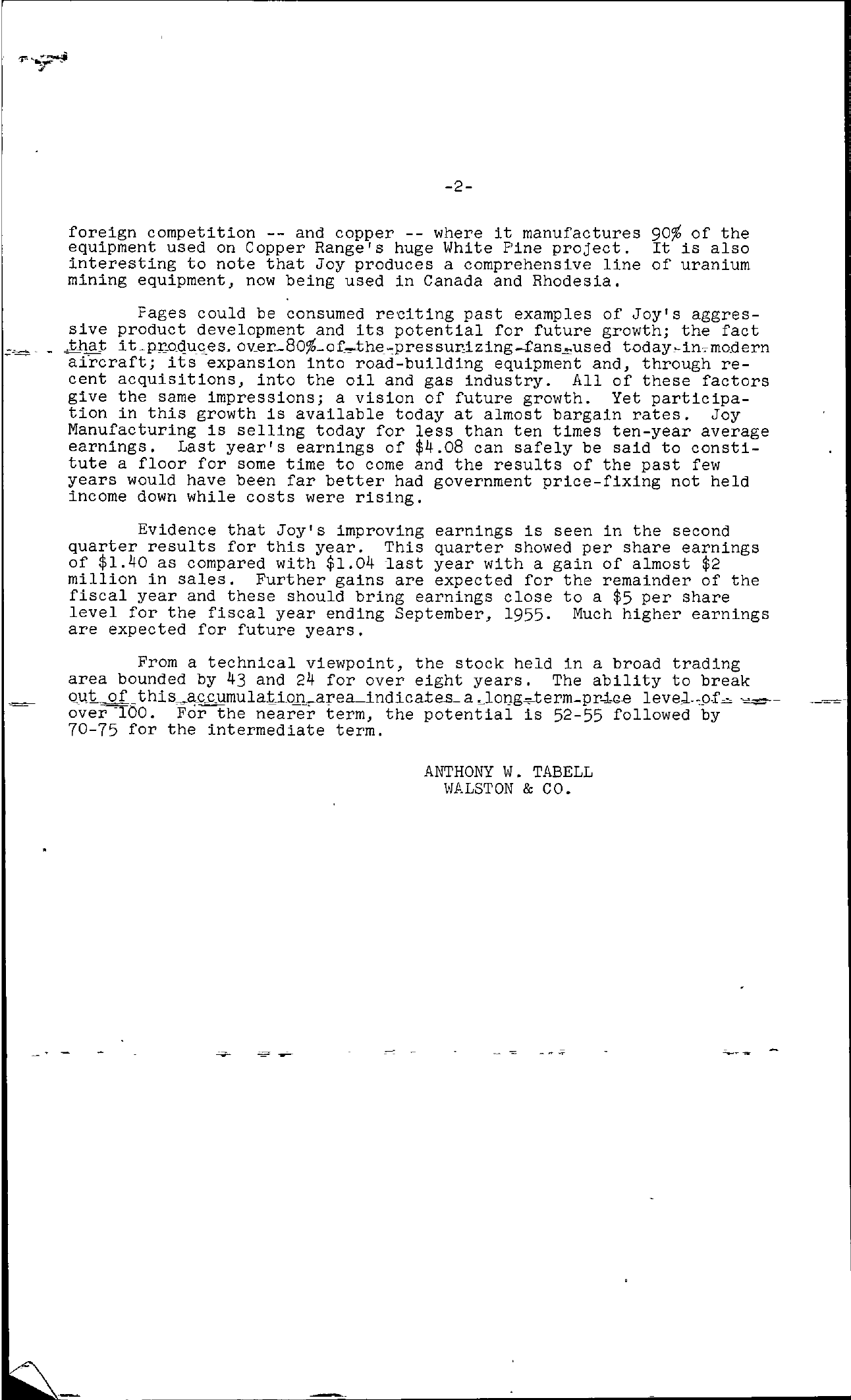 Walston &Co. MEMBERS NEW YORK STOCK EXCHANGE AND OTHER LEAOING STOCI( AND COMMODITY eXCHANGES NEW YORK PHILADELPHIA LOS ANGELES SAN FRANCISCO LUGANO iSw,…dd I OFFICES COAST TO COAST CONNECTEC BY DIRECT PRIVATE WIRE SYSTEM TABELL'S MARKET LEnER June 10, 1955 JOY MANUFACTURING CO. Statistics Twenty years ago coal mlnlng was a slow laborious process. Coal Current Market Dividend Current Yield 50 .''50 – –5-.-0 .. was mined by hand machines and dragged out of the mine tunnels by slow electric cars. Then, in 1937, introduced Funded Debt Common (shs.) 2,000,000. 893,954 and pioneered the shuttle car, the first of the three discoveries that were to revolutionize the mining of Sales, 1954 Sales, 1953 62,780,000 77,780,000 coal. This car, however, produced an uneconomical situation. Coal could be taken out of the mines Earned Per Share,1954 4.08 quickly, but with hand mining Earned Per Share,1953 5.89 methods it was impossible to dig sufficient coal to use the shuttle – 1955- 50 1/2 — 23 5/8 cars to full capacity. Ee.ven years later, in 1948, came the answer -the continuous miner – a machine which dug coal and loaded it onto shuttle cars as fast as it could be ripped from the earth. The major producer of continuous miners was Joy Manufacturing Company. One would think that the saga above had come full cycle. The intro- duction of the new machine, however, simply reversed the situation that had prevailed in pre-1937 days. Coal could now be mined faster than the shuttle cars could carry out of the tunnels. Half a shuttle operator's time was spent returning with empty cars. A great deal of a loaders time was' also -spent idle-;– these- d1.1'f1-cul tie-s .–Tfie- answer 'wa-s the extensible belt conveyor, a portable system of conveyor belts which would take coal off a continuous miner and carry it out of the mine tunnel as fast as it could be dug. The introducers Joy Manufacturing Company. The above story is told for a reason. It shows what can be done with aggressive management and product development. It is precisely this type of product development that has characterized growth companies. Instead of exploiting existing markets,such companies make their own markets. A capable team of Joy Manufacturing executives is showing its ability to do this. As an example in the decade 1945-1954, Joy acquired various companies at a cost of 8.8 million. In that same decade these companies earned, after all taxes and charges, 21.1 million or approximately two and one-half times what was paid for them. It would be hard to find a better record of astute acquisitions on the part of corporate management. Perhaps the reason many investors do not realize the growth poten- tial inherent in Joy is its identification with the coal industry. This view fails to take into account two factors. First, the competition among mine operators has practically forced installation of mechanized e-quipment For example, -a- m'ine equipped with continuous miners and ex- tensible conveyors can mine about 50 tons of coal per man per shift. The man-shift average for all mines worked during 1954 was less than 9 tons. It is easy to see the enormity of the competitive advantage which Joy equipment gives a mine operator. Secondly, only 44 of Joy's 1954 sales were in the coal mining field. Intelligent product development, as mentioned above, includes the use of a company's skills in other fields where they can develop a useful product. Joy has done precisely this. It has turned its ability to produce coal mining machinery into other mining fields – notably potash – where it has put the domestic potash industry on a par with -2- foreign competition — and copper — where it manufactures equipment used on Copper Range's huge White Pine project. 90 of the It is also interesting to note that Joy produces a comprehensive line of uranium mining equipment, now being used in Canada and Rhodesia. Fages could be consumed re'citing past examples of Joy's aggressive product development and its potential for future growth; the fact that i LpJ'.oqu;.es. ai-rcraft; its expansion into road-building equipment and, through recent acquisitions, into the oil and gas industry. All of these factors give the same impressions; a vision of future growth. Yet participation in this growth is available today at almost bargain rates. Joy Manufacturing is selling today for less than ten times ten-year average earnings. Last year's earnings of 4.08 can safely be said to constitute a floor for some time to come and the results of the past few years would have been far better had government price-fixing not held income down while costs were rising. Evidence that Joy's improving earnings is seen in the second quarter results for this year. This quarter showed per share earnings of 1.40 as compared with 1.04 last year with a gain of almost 2 million in sales. Further gains are expected for the remainder of the fiscal year and these should bring earnings close to a 5 per share level for the fiscal year ending September, 1955. Much higher earnings are expected for future years. From a technical viewpoint, the stock held in a broad trading area bounded by 43 and 24 for over eight years. The ability to break Qu,Lof a levecl-,p-f, over-100. For the nearer term, the potential is 52-55 followed by 70-75 for the intermediate term. ANTHONY W. TABELL WALSTON & CO.