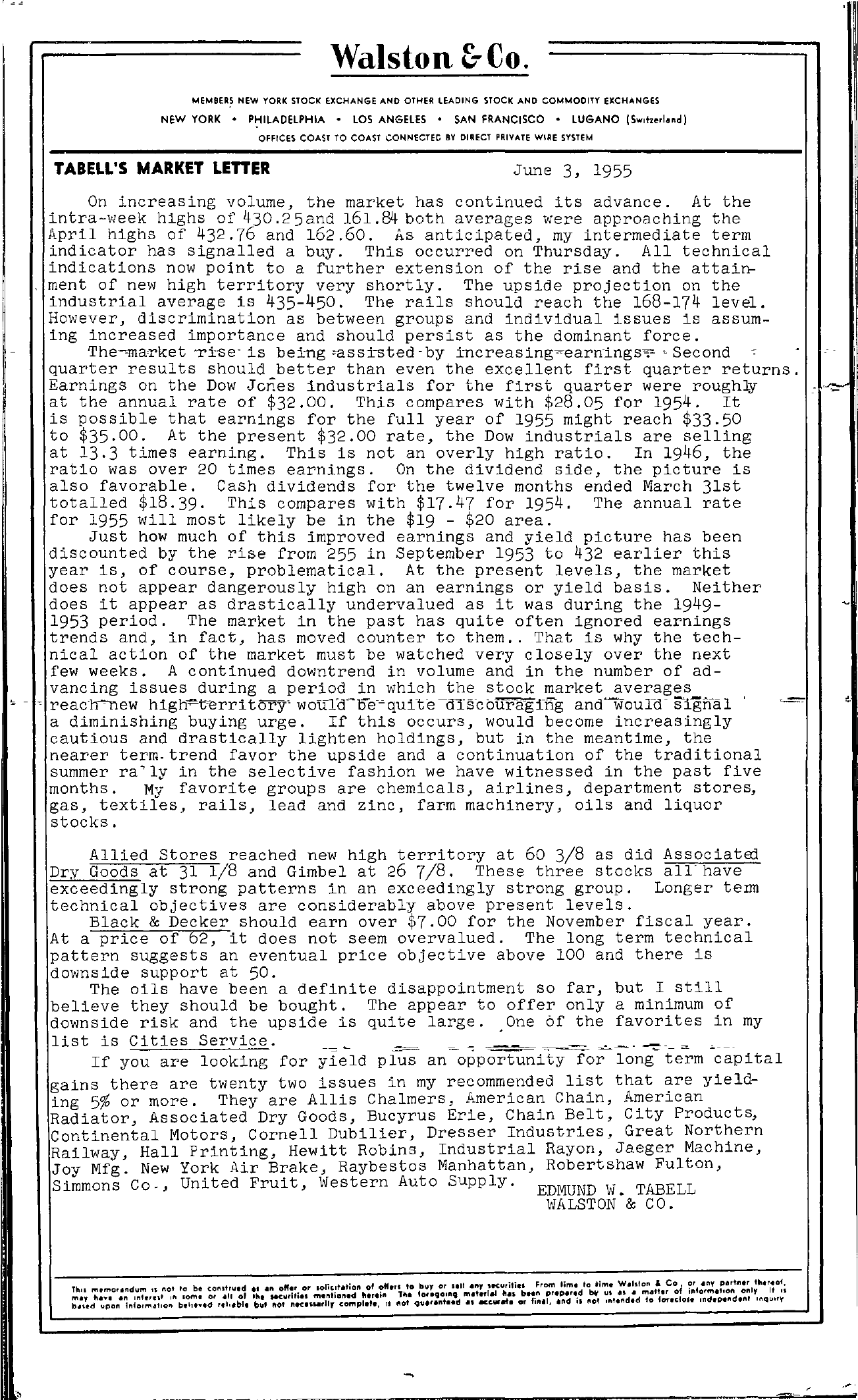 Walston 5- Co. MEMBERS NEW YORK STOCK EXCHANGE AND OTHER LEADING STOCK AND COMMODITY EXCHANGES NEW YORK PHILADELPHIA LOS ANGELES SAN FRANCISCO LUGANO ISw,.,I..d) OFFICES COAST TO COAST COlNECTEC BY DIRECT PRIVATE WIRE SYSTEM TABEll'S MARKET lEnER June 3, 1955 On increasing volume, the market has continued its advance. At the intra-week highs of 430.25 and 161. 84 both averages were approaching the April highs of 432.76 and 162.60. As anticipated, my intermediate term indicator has signalled a buy. This occurred on Thursday. All technical indications now point to a further extension of the rise and the ment of new high territory very shortly. The upside projection on the industrial average is 435-450. The rails should reach the 168-174 However, discrimination as between groups and individual issues is assum- ing increased importance and should persist as the dominant force. Tise- is being -by – Second . quarter results should better than even the excellent first quarter returns. Earnings on the Dow Jcnes industrials for the first quarter were roughly at the annual rate of 32.00. This compares with 28.05 for 1954. It is possible that earnings for the full year of 1955 might reach 33.50 to 35.00. At the present 32.00 rate, the Dow industrials are selling at 13.3 times earning. This is not an overly high ratio. In 1946, the ratio was over 20 times earnings. On the dividend side, the picture is also favorable. Cash dividends for the twelve months ended March 31st totalled 18.39. This compares with 17.47 for 1954. The annual rate for 1955 will most likely be in the 19 – 20 area. Just how much of this improved earnings and yield picture has been discounted by the rise from 255 in September 1953 to 432 earlier this year is, of course, problematical. At the present levels, the market does not appear dangerously high on an earnings or yield basis. Neither does it appear as drastically undervalued as it was during the 1949- 1953 period. The market in the past has quite often ignored earnings trends and, in fact, has moved counter to them .. That is why the tech- nical action of the market must be watched very closely over the next few weeks. A continued downtrend in volume and in the number of ad- vancing issues during a period in which the stock market averages – – reach–new andwoulC!- signal a diminishing buying urge. If this occurs, would become increasingly cautious and drastically lighten holdings, but in the meantime, the nearer term-trend favor the upside and a continuation of the traditional summer ra'ly in the selective fashion we have witnessed in the past five months. My favorite groups are chemicals, airlines, department gas, textiles, rails, lead and zinc, farm machinery, oils and liquor stocks. Allied Stores reached new high territory at 60 3/8 as did Associatro Dry Goods at 31 1/8 and Gimbel at 26 7/8. These three stocks all have exceedingly strong patterns in an exceedingly strong group. Longer term technical objectives are considerably above present levels. Black & Decker should earn over 7.00 for the November fiscal year. At a price of 62, it does not seem overvalued. The long term technical pattern suggests an eventual price objective above 100 and there is downside support at 50. The oils have been a definite disappointment so far, but I still believe they should be bought. The appear to offer only a minimum of downside risk and the upside is quite large . . One of the favorites in my list is Cities Service. -'- -.0 If you are looking for yield plus an opportunity for long term capital gains there are twenty two issues in my that yield- ing 5 or more. They are Allis Chalmers, Amerlcan Chaln, Amerlcan Radiator, Associated Dry Goods, Bucyrus Erie, Chain Belt, City Products, Continental Motors, Cornell Dubilier, Dresser Industries, Great Northern Railway, Hall Printing, Hewitt Robins, Industrial Rayon, Jaeger Machine, Joy Mfg. New York Air Brake, Raybestos Manhattan, Robertshaw Fulton, Simmons Co., United Fruit, Western Auto Supply. EDMUND vI. TABELL WALSTON & CO.