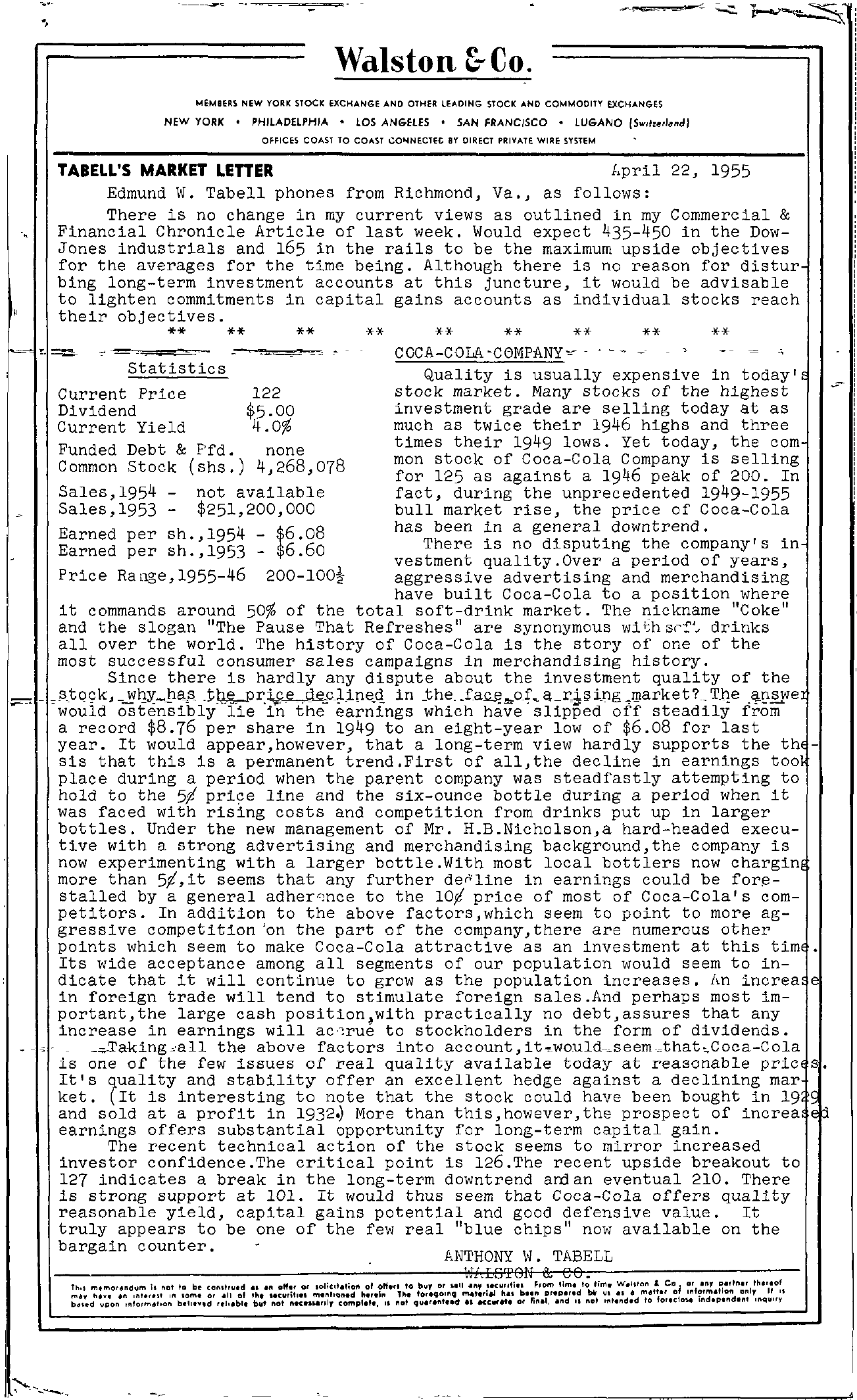 Walston &- Co. NEW YORK NEW YORK STOCK EXCHANGE AND OTHER LEADING STOCK AND COMMODITY EXCHANGES PHILADELPHIA lOS ANGELES SAN FRANCISCO LUGANO rSwd,.,Id/ OFFICES COAST TO COAST BY DIRECT PRIVATE WIRE SYSTEM TAB Ell'S MARKET LEnER j,pril 22, 1955 Edmund W. Tabell phones from Richmond, Va., as follows There is no change in my current views as outlined in my Commercial & Financial Chronicle Article of last week. Would expect 435-450 in the Dow- Jones industrials and 165 in the rails to be the maximum upside objectives for the averages for the time being. Although there is no reason for distur bing long-term investment accounts at this juncture, it would be advisable to lighten commitments in capital gains accounts as individual stocks reach their objectives. COCA-COLA -C0MPANY' .. – – – Statistics Quality is usually expensive in today'E Current Price 122 stock market. Many stocks of the highest Dividend Current Yield 5.00 4.0 investment grade are selling today at as much as twice their 1946 highs and three Funded Debt & F'fd. none Common ,stock (Shs.) 4,268,078 times their 1949 lows. Yet today, the com mon stock of Coca-Cola Company is selling for 125 as against a 1946 peak of 200. In Sales,1954 – not available fact, during the unprecedented 1949-1955 Sales,1953 – 251,200,000 bull market rise, the price of Coca-Cola Earned per sh.,1954 – 6.08 Earned per sh.,1953 – 6.60 has been in a general downtrend. There is no disputing the company's in vestment quality.Over a period of years, Price Ra l1ge, 1955-46 aggressive advertising and merchandising have built Coca-Cola to a position where it commands around 50 of the total soft-drink market. The nickname Coke and the slogan The Pause That Refreshes are synonymous with se', drinks allover the world. The history of Coca-Cola is the story of one of the most successful consumer sales campaigns in merchandising history. est Since ock, there would ostensibly is hardly any dispute about the investment lie in the in earnings the. which have slciLprpo1ef)di.ngoff quality of the Tqe .'l–!1sy/eJ steadily from a record 8.76 per share in 1949 to an eight-year low of 6.08 for last year. It would appear,however, that a long-term view hardly supports the thE- Sis that this is a permanent trend.First of all,the decline in earnings tool plac hold e during to the 51a period when the parent company was steadfastly attempting to price line and the six-ounce bottle during a period when it was faced with rising costs and competition from drinks put up in larger bottles. Under the new management of Mr. H.B.Nicholson,a hard-headed execu- tive with a strong advertising and merchandising background,the company is now experimenting with a larger bottle.With most local bottlers now chargine more than 51,it seems that any further derline in earnings could be fore- stalled by a general adhercmce to the 101 price of most of Coca-Cola's com- petitors. In addition to the above factors,which seem to point to more ag- gressive competition on the part of the company,there are numerous other pOints which seem to make Coca-Cola attractive as an investment at this tim Its wide acceptance among all segments of our population would seem to in- dicate that it will continue to grow as the population increases. hn increa e in foreign trade will tend to stimulate foreign sales.And perhaps most im- portant,the large cash practically no debt,assures that any increase in earnings will ac-rue to stockholders in the form of dividends. the above factors into account, is one of the few issues of real quality available today at reasonable pric IE. It's quality and stability offer an excellent hedge against a declining mar keto (It is interesting to note that the stock could have been bought in and sold at a profit in More than this,however,the prospect of earnings offers substantial opportunity for long-term capital gain. The recent technical action of the stock seems to mirror increased investor confidence.The critical point is 126.The recent upside breakout to 127 indicates a break in the long-term downtrend andan eventual 210. There is strong support at 101. It would thus seem that Coca-Cola offers quality reasonable yield, capital gains potential and good defensive value. It truly appears to be one of the few real blue chips now available on the bargain counter. – ANTHONY vi. TABELL \IH5'f'ON & 00.