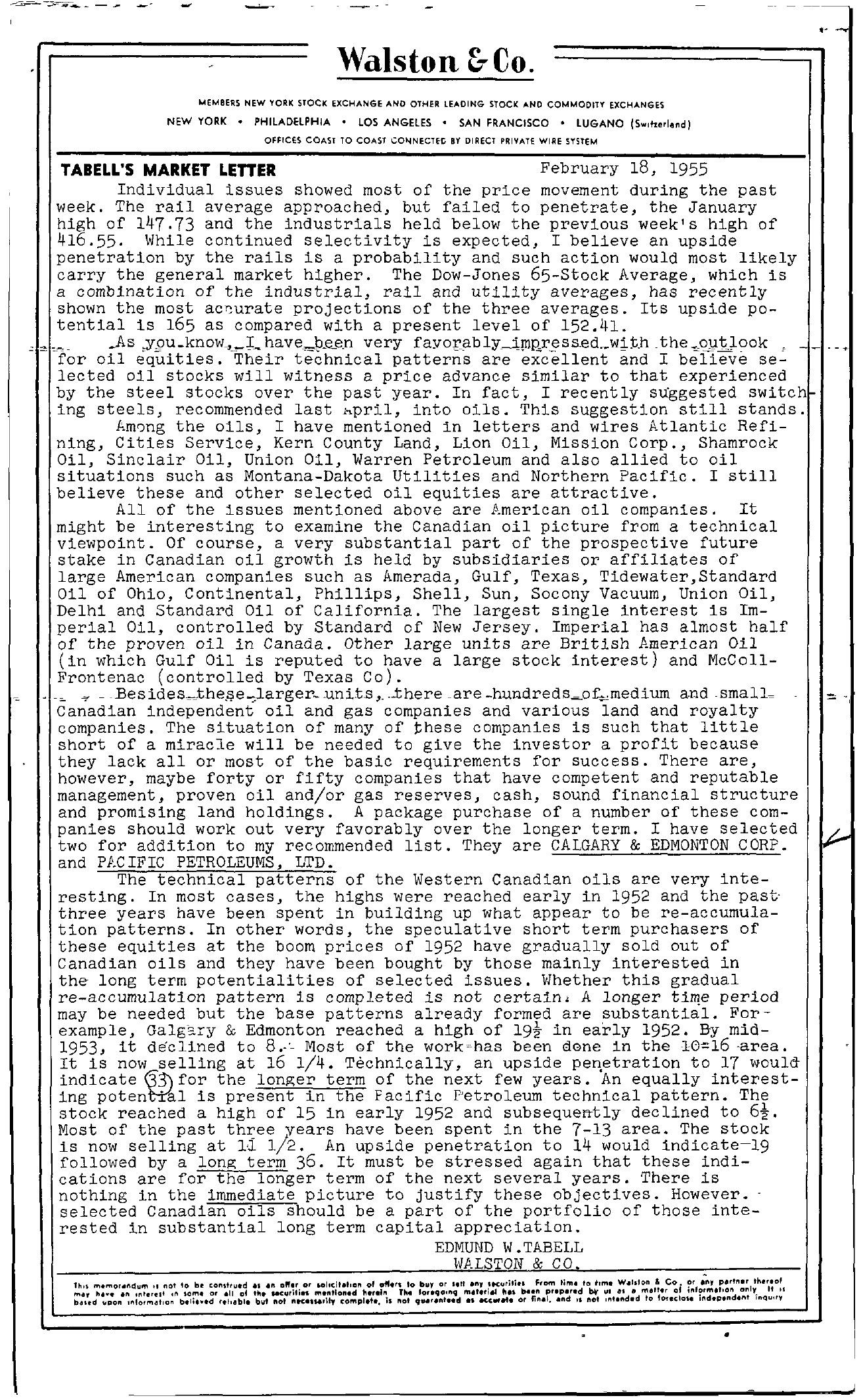 …. F – — – – – – Walston &- Co. t.4EMBERS NEW YORK STOCK EXCHANGE AND OTHER LEADING STOCI( AND COMMODITY EXCHANGES NEW YORK PHILADELPHIA LOS ANGELES SAN FRANCISCO LUGANO IS.,',Id I OFFICES COA'iT TO COAST CO't..lNECTfC BY DIRECT PRIVATE WIRE SYSTEM TABELL'S MARKET LEnER February 18, 1955 Individual issues showed most of the price movement during the past week. The rail average approached, but failed to penetrate, the January high of 147.73 and the industrials held below the previous week's high of 416.55. While continued selectivity is expected, I believe an upside penetration by the rails is a probability and such action would most likely carry the general market higher. The Dow-Jones 65-Stock Average, which is a combination of the industrial, rail and utility averages, has recently shown the most projections of the three averages. Its upside po- tential is 165 as compared with a present level of 152.41 . . ' ..As youknow,Lhavebee.n very – -for oil equities. -Their technical patterns are excellent and I believe se- lected oil stocks will witness a price advance similar to that experienced by the steel stocks over the past year. In fact, I recently suggested sWitch ing steels, recommended last hpril, into Oils. This suggestion still stands. Am0ng the Oils, I have mentioned in letters and wires Atlantic Refi- ning, Cities Service, Kern County Land, Lion Oil, Mission Corp., Shamrock Oil, Sinclair Oil, Union Oil, Warren Petroleum and also allied to oil situations such as Montana-Dakota Utilities and Northern Pacific. I still believe these and other selected oil equities are attractive. All of the issues mentioned above are American oil companies. It might be interesting to examine the Canadian oil picture from a technical Viewpoint. Of course, a very substantial part of the prospective future stake in Canadian oil growth is held by subsidiaries or affiliates of large American companies such as Amerada, Gulf, Texas, Tidewater,Standard Oil of Ohio, Continental, Phillips, Shell, Sun, Socony Vacuum, Union Oil, Delhi and Standard Oil of California. The largest single interest is Im- perial Oil, controlled by Standard of New Jersey. Imperial has almost half of the proven oil in Canada. Other large units are British American Oil (in which Gulf Oil is reputed to have a large stock interest) and McColl- Frontenac (controlled by Texas Co) . . ' Besides the.se..,larger .units,…there are Canadian independent oil and gas companies and various land and royalty companies. The situation of many of these companies is such that little short of a miracle will be needed to give the investor a profit because they lack all or most of the basic requirements for success. There are, however, maybe forty or fifty companies that have competent and reputable management, proven oil and/or gas reserves, cash, sound financial structure and promising land holdings. A package purchase of a number of these com- panies should work out very favorably over the longer term. I have selected two and nfocr addition to my IFIC PETROLEUMS, recommended LTD. list. They are CALGARY & EDMONTON CORP. The technical patterns of the Western Canadian oils are very interesting. In most cases, the highs were reached early in 1952 and the past three years have been spent in building up what appear to be re-accumulation patterns. In other words, the speculative short term purchasers of these equities at the boom prices of 1952 have gradually sold out of Canadian oils and they have been bought by those mainly interested in the long term potentialities of selected issues. Whether this gradual re-accumulation pattern is completed is not certain. A longer time period may be needed but the base patterns already formed are substantial. For- example, & Edmonton reached a high of 19t in early 1952. By mid- 1953, it declined to 8.'- Most of the been done in the 10-16 area. It is now selling at 16 1/4. Technically, an upside peqetration to 17 would indicate the longer term of the next few years. An equally interest- ing potenhll is present in the Facific Petroleum technical pattern. The stock reached a high of 15 in early 1952 and subsequently declined to 6t. Most of the past three years have been spent in the 7-13 area. The stock is now selling at 1,1 1/2. An upside penetration to 14 would indicate-19 followed by a long term 36. It must be stressed again that these indi- cations are for the longer term of the next several years. There is nothing in the immediate picture to justify these objectives. However . selected Canadian oils should be a part of the portfoliO of those interested in substantial long term capital appreciation. EDMUND W.TABELL WALSTON & CO. . ' / ,,-