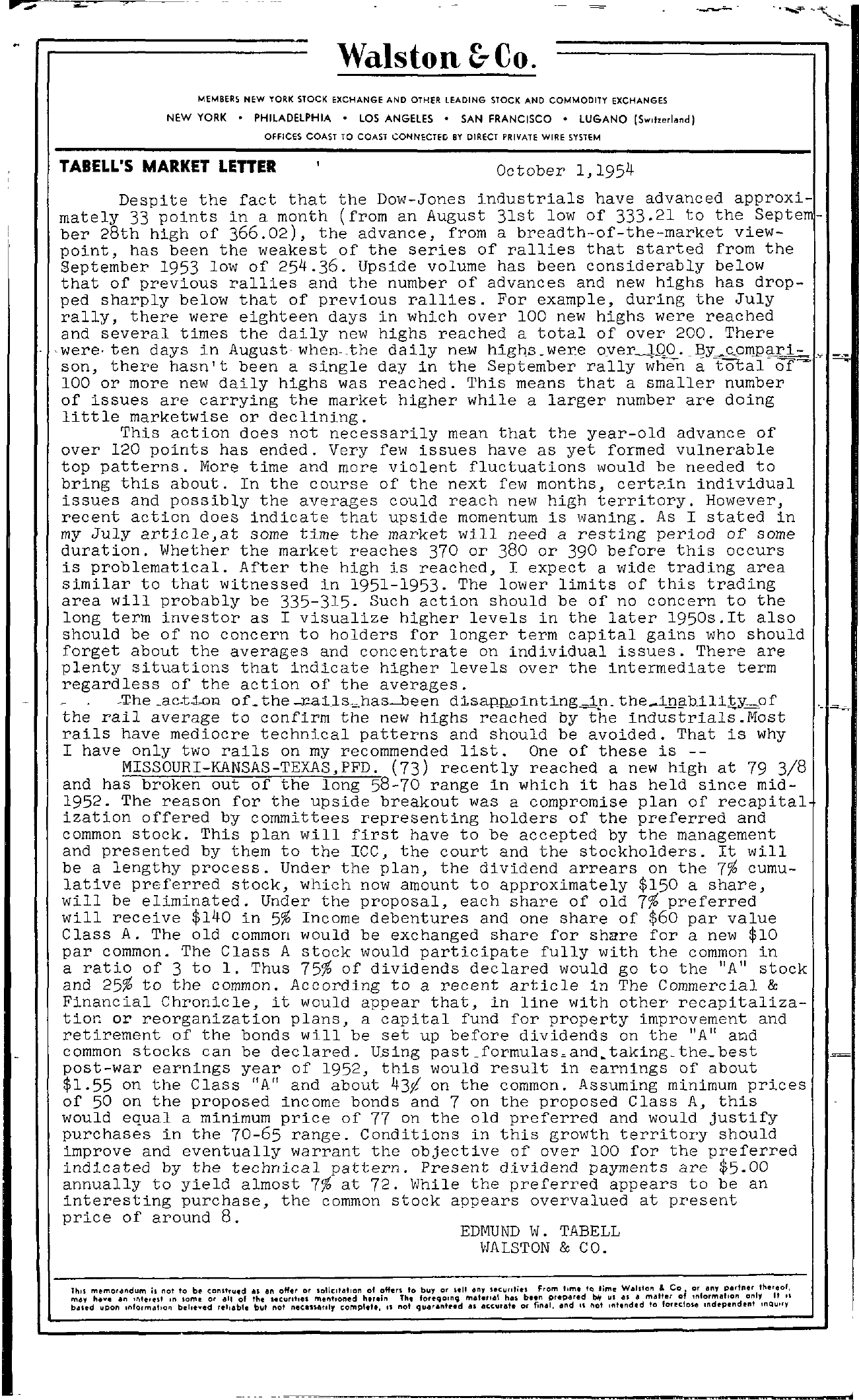 —————– Walston &- Co. –..–.;;….. – .– M'EMBERS NEW YORK STOCK EXCHANGE AND OTHER LEADING STOCK AND COMMODITY EXCHANGES NEW YORK PHILADELPHIA LOS ANGELES SAN FRANCISCO LUGANO (Sw,Id I OFFices COAST TO COAST CONNECnc. BY DIRECT PRIVATE WIRE SYSTEM TABELL'S MARKET LETTER October 1,1954 Despite the fact that the Dow-Jones industrials have advanced approxi- mately 33 pOints in a month (from an August 31st low of 333.21 to the Septem- ber 28th high of 366.02), the advance, from a breadth-of-the-market view- point, has been the weakest of the series of rallies that started from the September 1953 low of 254.36. Upside volume has been considerably below that of previous rallies and the number of advances and new highs has drop- ped sharply below that of previous rallies. For example, during the July rally, there were eighteen days in which over 100 new highs were reached and several times the daily new highs reached a total of over 200. There . were ten days in August- when-the daily new highs were overQO. Bycoll1!lari-, ason, there hasn't been a single day in the September rally when total-of 100 or more new daily highs was reached. This means that a smaller number of issues are carrying the market higher while a larger number are doing little marketwise or declining. This action does not necessarily mean that the year-old advance of over 120 pOints has ended. Very few issues have as yet formed vulnerable top patterns. More time and more violent fluctuations would be needed to bring this about. In the course of the next few months, cert2.in individual issues and possibly the averages could reach new high territory. However, recent action does indicate that upside momentum is waning. As I stated in my July article,at some time the market will need a resting period of some duration. Whether the market reaches 370 or 380 or 390 before this occurs is problematical. After the high is reached, I expect a wide trading area similar to that witnessed in 1951-1953. The lower limits of this trading area will probably be 335-315. Such action should be of no concern to the long term investor as I visualize higher levels in the later 1950s.It also should be of no concern to holders for longer term capital gains who should forget about the averages and concentrate on individual issues. There are plenty situations that indicate higher levels over the intermediate term regardless of the action of the averages. -The ac.t.;t,ol'l of. the L'.ails.has—been dLsa.pJlDinting .1.11- theillfl.bilit,;y; of the rail average to confirm the new highs reached by the industrials.Most rails have mediocre technical patterns and should be avoided. That is why I have only two rails on my recommended list. One of these is — MISSOURI-KANSAS-TEXAS,PFD. (73) recently reached a new high at 79 3/8 and has broken out of the long 58-70 range in which it has held since mid- 1952. The reason for the upside breakout was a compromise plan of recapital ization offered by committees representing holders of the preferred and common stock. This plan will first have to be accepted by the management and presented by them to the ICC, the court and the stockholders. It will be a lengthy process. Under the plan, the dividend arrears on the 7 cumu- lative preferred stock, which now amount to approximately 150 a share, will be eliminated. Under the proposal, each share of old 7 preferred will receive 140 in 5 Income debentures and one share of 60 par value Class A. The old common vlould be exchanged share for share for a new 10 par common. The Class A stock would participate fully with the common in a ratio of 3 to 1. Thus 75 of dividends declared would go to the A stock and 25 to the common. According to a recent article in The Commercial & Financial Chronicle, it would appear that, in line with other recapitaliza- tion or reorganization plans, a capital fund for property improvement and retirement of the bonds will be set up before dividends on the A aJld common stocks can be declared. Using pastformulasand.taking.thebest post-war earnings year of 1952, this would result in earnings of about 1.55 on the Class A and about 43.i on the common. Assuming minimum prices of 50 on the proposed income bonds and 7 on the proposed Class A, this would equal a minimum price of 77 on the old preferred and would justify purchases in the 70-65 range. Conditions in this growth territory should improve and eventually warrant the objective of over 100 for the preferred indicated by the technical pattern. Present dividend payments are 5.00 annually to yield almost 7 at 72. While the preferred appears to be an interesting purchase, the common stock appears overvalued at present price of around 8. EDMUND W. TABELL HA1STON & CO. This memorlndu, h not to be construed ,15 an offer or OIit;llatlon of offer' to buy or sell ny securltiu From lime hll time W.ahlon , Co. or any partn.r Ihereo f may h. tI'Ihrrul ,n some or all 01 Ihe ,.cunl,.s meflt,oned h,r.in Th, foreQo,nQ mat.r,at holli b.,n orep!Ired b. III lin a molltter of .nformat,on only It b!lled upon ,nformllon bh..ed reliable bioi! not nee.nanty compl.t II not qu,,.enld III accurat' or finl, and not Intendld 10 fouclole ,ndependent InCiIlY