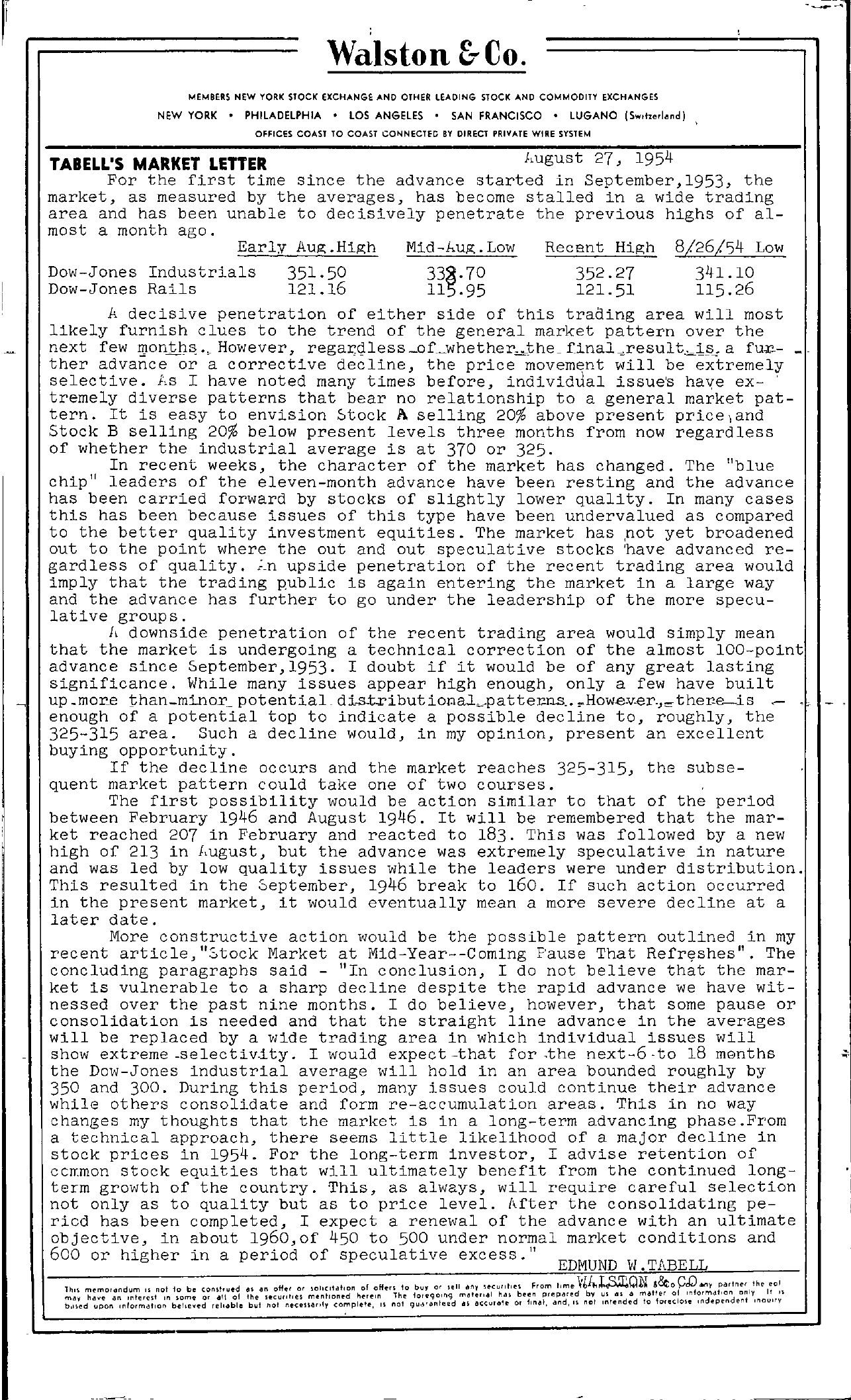 —— Walston &- Co. MEMBERS NEW YORK STOCK EXCHANGE AND OTHER LEADING STOCK AND COMMODITY EXCHANGES NEW YORK PHILADELPHIA LOS ANGELES SAN FRANCISCO LUGANO ISw.twld) , OFFICES COAST TO COAST CONNECTHi BY DIRECT PRIVATE WIRE SYSTEM TABELL'S MARKET LETTER Jcugust 27, 1954 For the first time since the advance started in September,1953, the market, as measured by the averages, has become stalled in a wide trading area and has been unable to decisively penetrate the previous highs of al- most a month ago. Early Aug.High Mid-hug.Low Recant High 8/26/54 Low Dow-Jones Industrials 351.50 Dow-Jones Rails 121.16 33g.70 11595 352.27 121.51 341.10 115.26 A decisive penetration of either side of this traBing area will most likely furnish clues to the trend of the general market pattern over the next few l11onths., However, regar;(lless ofwhether.1;he final resul t-'-t.s- a fu;G.- ther advance or a corrective decline, the price movement will be extremely selective. i.s I have noted many times before, individJal issue's ha1(e ex- tremely diverse patterns that bear no relationship to a general market pat- tern. It is easy to envision Stock A selling 20 above present price,and Stock B selling 20 below present levels three months from now regardless of whether the industrial average is at 370 or 325. In recent weeks, the character of the market has changed. The blue chip leaders of the eleven-month advance have been resting and the advance has been carried forward by stocks of slightly lower quality. In many cases this has been because issues of this type have been undervalued as compared to the better quality investment equities. The market has not yet broadened out to the point where the out and out speculative stocks 'have advanced re- gardless of quality . ..n upside penetration of the recent trading area would imply that the trading public is again entering the market in a large way and the advance has further to go under the leadership of the more specu- lative groups. Il downside penetration of the recent trading area would simply mean that the market is undergoing a technical correction of the almost 100-point advance since September,1953. I doubt if it would be of any great lasting significance. While many issues appear high enough, only a few have built up more thanminoI' potential. di-s.t.ributio.lalpa tteL'u-s.. ,..How.ev.er.,,,, there-is -, enough of a potential top to indicate a possible decline to, roughly, the 325-315 area. Such a decline would, in my opinion, present an excellent buying opportunity. If the decline occurs and the market reaches 325-315, the subse- quent market pattern could take one of two courses. The first possibility would be action similar to that of the period between February 1946 and August 1946. It will be remembered that the mar- ket reached 207 in February and reacted to 183. This was followed by a new high of 213 in J,ugust, but the advance was extremely speculative in nature and was led by low quality issues while the leaders were under distribution. This resulted in the September, 1946 break to 160. If such action occurred in the present market, it would eventually mean a more severe decline at a later date. More constructive action would be the possible pattern outlined in my recent article,Stock Market at Mid-Year–Coming Pause That Refrshes. The concluding paragraphs said – In conclusion, I do not believe that the mar- ket is vulnerable to a sharp decline despite the rapid advance we have wit- nessed over the past nine months. I do believe, however, that some pause or consolidation is needed and that the straight line advance in the averages will be replaced by a wide trading area in which individual issues will show extreme -selectiv.ity. I would expect -that for .the next-6 -to 18 months the Dow-Jones industrial average will hold in an area bounded roughly by 350 and 300. During this period, many issues could continue their advance while others consolidate and form re-accumulation areas. This in no way changes my thoughts that the market is in a long-term advancing phase.From a technical approach, there seems little likelihood of a major decline in stock prices in 1954. For the long-term investor, I advise retention of ccrrmon stock equities that will ultimately benefit from the continued long- term growth of the country. ThiS, as always, will require careful selection not only as to quality but as to price level. After the consolidating pe- ried has been completed, I expect a renewal of the advance with an ultimate objective, in about 1960,of 450 to 500 under normal market conditions and 600 or higher in a period of speculative excess. EDMUND 111. TABELL if., .. mmO'dndum IS not to be conued , In offer or soliCItat,on of oHers to buy or ell … ny securitIes From lime lJ…QN &&op.y iarlner,jnl',ol m … y 'Ive an ,nlue,t ,n ..orne or lilt 01 b,'led upon ,nformdt,on beloeyed reliable tbhet securitIes mentioned here,n not neceuaroly complete, IS llle toreqo,nq m … ttr'41 has b!en prepMed nol qUl'anlced as accurate or l,n1ll, and, 's by net us /II a malle' 0 tn o,ml .on on y ,\ ,ntended to iO'etlo\e ,ndepl'ndent ,nou,v