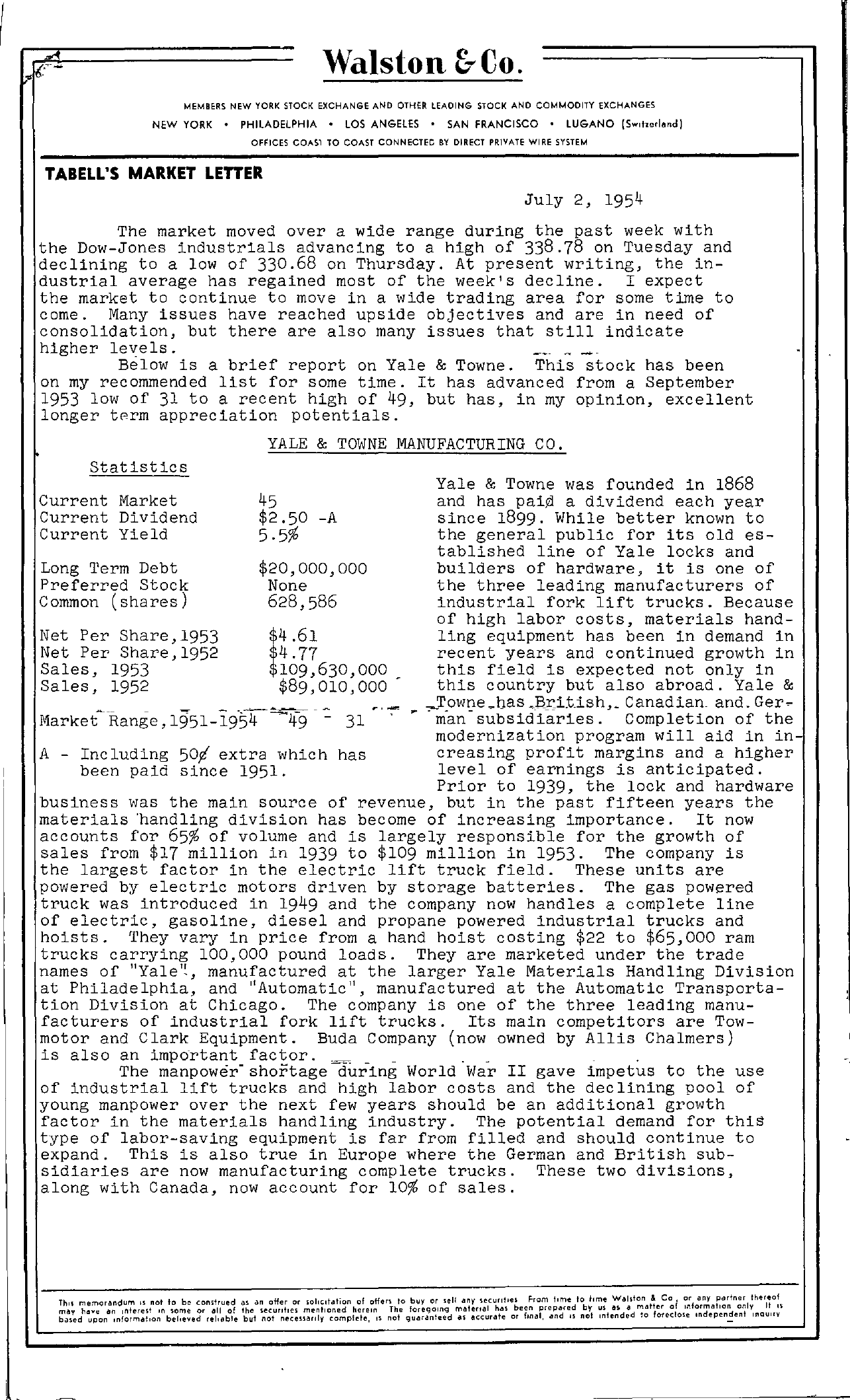 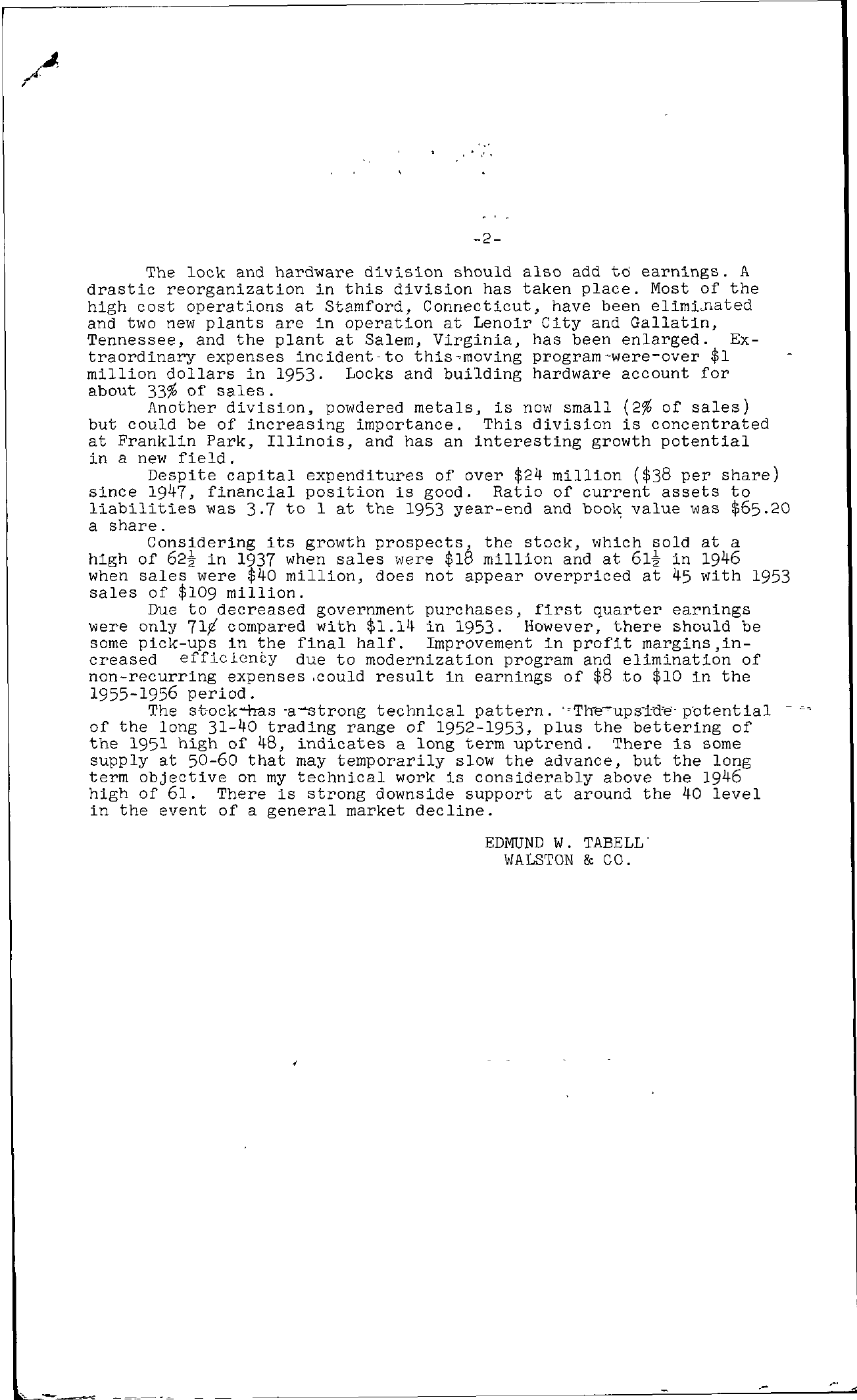 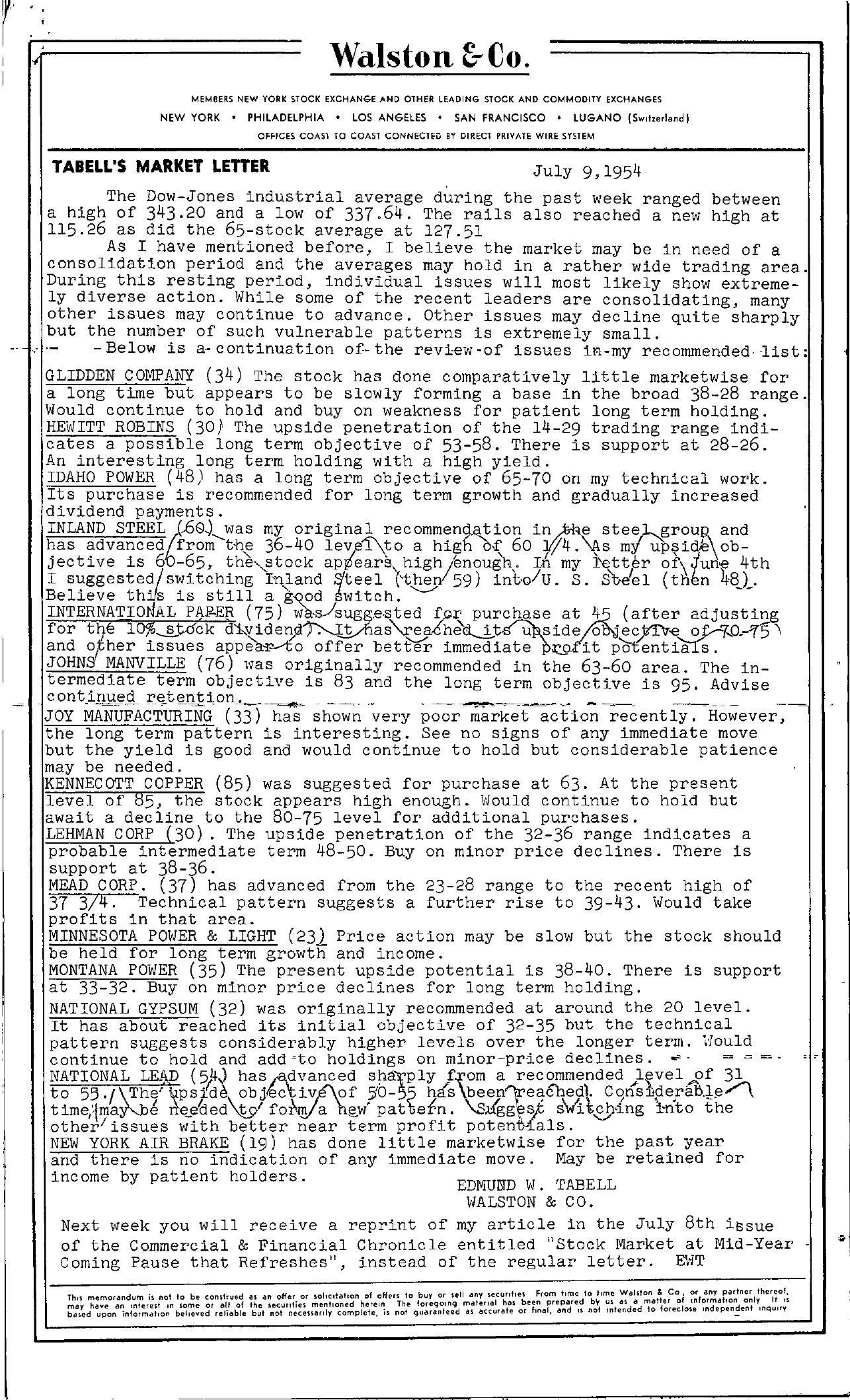 't Walston &Co. MEMBERS NEW YORK STOCK EXCHANGE AND OTHER LEADING STOCK AND COMMODITY EXCHANGES NEW YORK PHILADELPHIA LOS ANGELES SAN FRANCISCO LUGANO (Sw,h.dd) OFFICES CQASl TO COAST CONNECTEr. BY DIRECT PRIVATE WIRE SYSTEM TABEll'S MARKET lETTER July 9,1954 The Dow-Jones industrial average during the past week ranged between a high of 343.20 and a low of 337.64. The rails also reached a new high at 115.26 as did the 65-stock average at 127.51 As I have mentioned before, I believe the market may be in need of a consolidation period and the averages may hold in a rather wide trading area. During this resting period, individual issues will most likely show extremely diverse action. While some of the recent leaders are consolidating, many other issues may continue to advance. Other issues may decline quite sharply but the number of such vulnerable patterns is extremely small. ,- ,- – Below is a- continuation of the review -of issues hI-my recommended-list GLIDDEN COMPANY (34) The stock has done comparatively little marketwise for a long time but appears to be slowly forming a base in the broad 38-28 range. Would continue to hold and buy on weakness for patient long term holding. HEWITT ROBINS (30) The upside penetration of the 14-29 trading range indi- cates a possible long term objective of 53-58. There is support at 28-26. An interesting long term holding with a high yield. IDAHO POWER (48) has a long term objective of 65-70 on my technical work. Its purchase is recommended for long term growth and gradually increased dividend payments. INLAND STEEL (..60-J was my original recommendation in );-t.l.e stee4rouR and has jec tiavdevainsce6d6ff-r6o5m, 'tt'hhe3,s6t-o4c0k alepv'ee'afr\sto, haighhi/genh;bJU.gfh,6. 0I1f (m4y. \Ai,'stmteyrUoPfS\iJdukn\ eob4- th BI esluiegvgeesttheds/ switching is still aI'nlaondd Sw'tieteclh.('ther/59) into/U. S. St,e'el (thn 48J. INTERNATIONAL PF-Ef\ (75) wa-s..lsugg,e-sted fpJ' purchase a4 (after adjusting for and the oih 10t,ock er issues d-Zider;P1'-JynasVeht-s'Uhside appeaTo offer better immediate-ro i 0 t p'e6ctyervn-te io.H..O.-'f'5'\ JOHNS MANVILLE (76) was originally recommended in the 63-60 area. The in- termediate term objective is 83 and the long term objective is 95. Advise continued retention. . – – –… ——– – – – – – – – – -.. -.& — – — JOY MANUFACTURING (33) has shown very poor market action recently. However, the long term pattern is interesting. See no signs of any immediate move but the yield is good and would continue to hold but considerable patience may be needed. KENNECOTT COPPER (85) was suggested for purchase at 63. At the present level of 85, the stock appears high enough. Would continue to hold but await a decline to the 80-75 level for additional purchases. LEHMAN CORP (30) . The upside penetration of the 32-36 range indicates a probable intermediate term 48-50. Buy on minor price declines. There is support at 38-36. MEAD CORP. (37) has advanced from the 23-28 range to the recent high of 37 3/4. Technical pattern suggests a further rise to 39-43. Would take profits in that area. MINNESOTA POWER & LIGHT (23) Price action may be slow but the stock should be held for long term growth and income. MONTANA POWER (35) The present upside potential is 38-40. There is support at 33-32. Buy on minor price declines for long term holding. NATIONAL GYPSUM (32) was originally recommended at around the 20 level. It has about reached its initial objective of 32-35 but the technical pattern suggests considerably higher levels over the longer term. i'Jould continue to hold and addto holdings on minor-price declines. – – NATIONAL LED (5J hasdvanced shply fm a recommended;lvel of 31 ttoime5'31m.ay\T',hbe ' upside obj,Bc'tivf\ Ike'cled\t91 fot.m/a Of 5'0-55 ha's h.w pattefn. beS.efng1g'es'lfcqseW9li.tCl'qinngsJlp-neptoiibt,hJ,e!,/'\ other/issues with better near term profit potentals. NEW YORK AIR BRAKE (19) has done little marketwise for the past year and there is no indication of any immediate move. May be retained for income by patient holders. EDMUND J. 'rABELL WALSTON & CO. — Next week you will receive a reprint of my article in the July 8th issue of the Commercial & Financial Chronicle entitled Stock Market at Mid-Year Coming Pause that Refreshes, instead of the regular letter. EViT 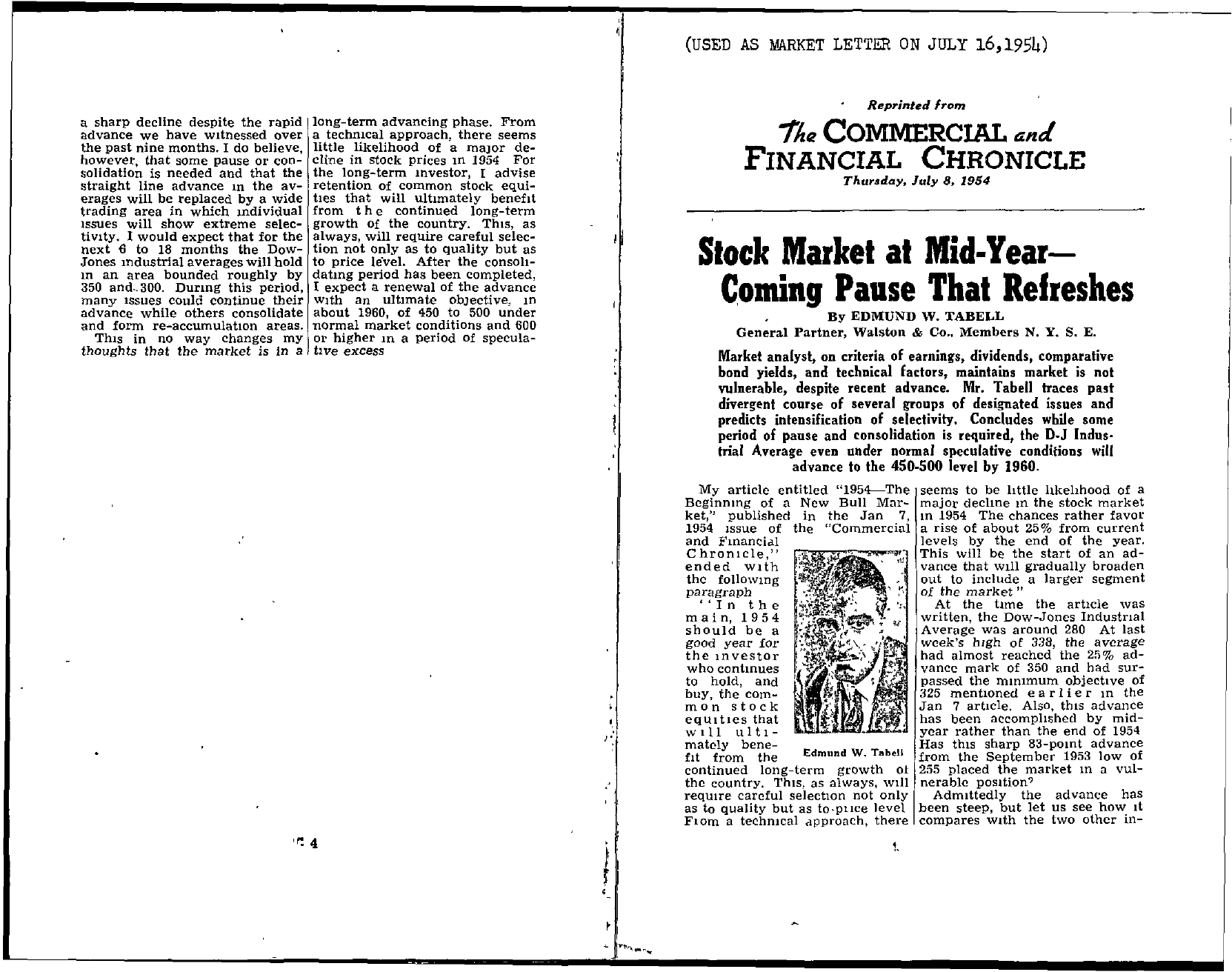 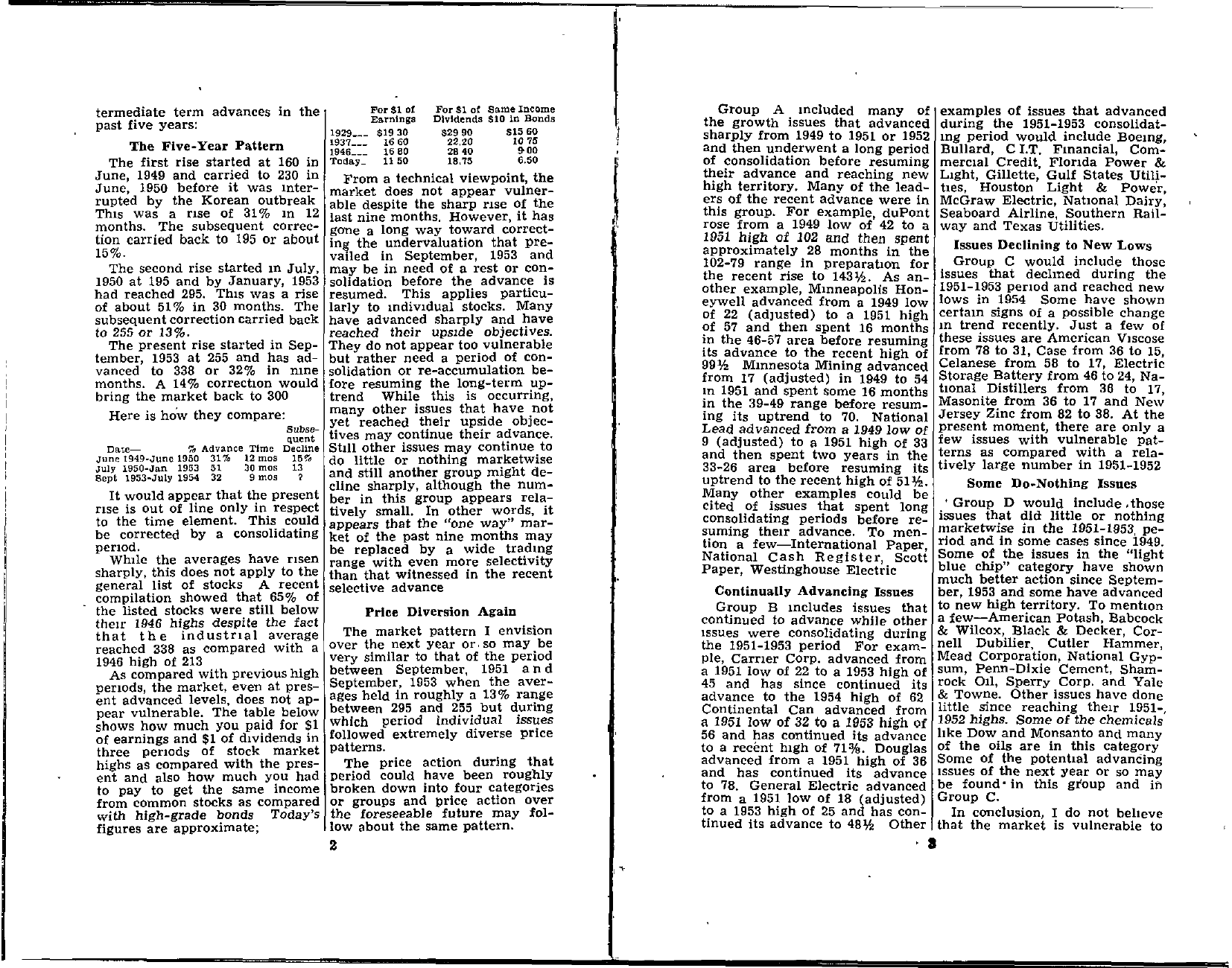 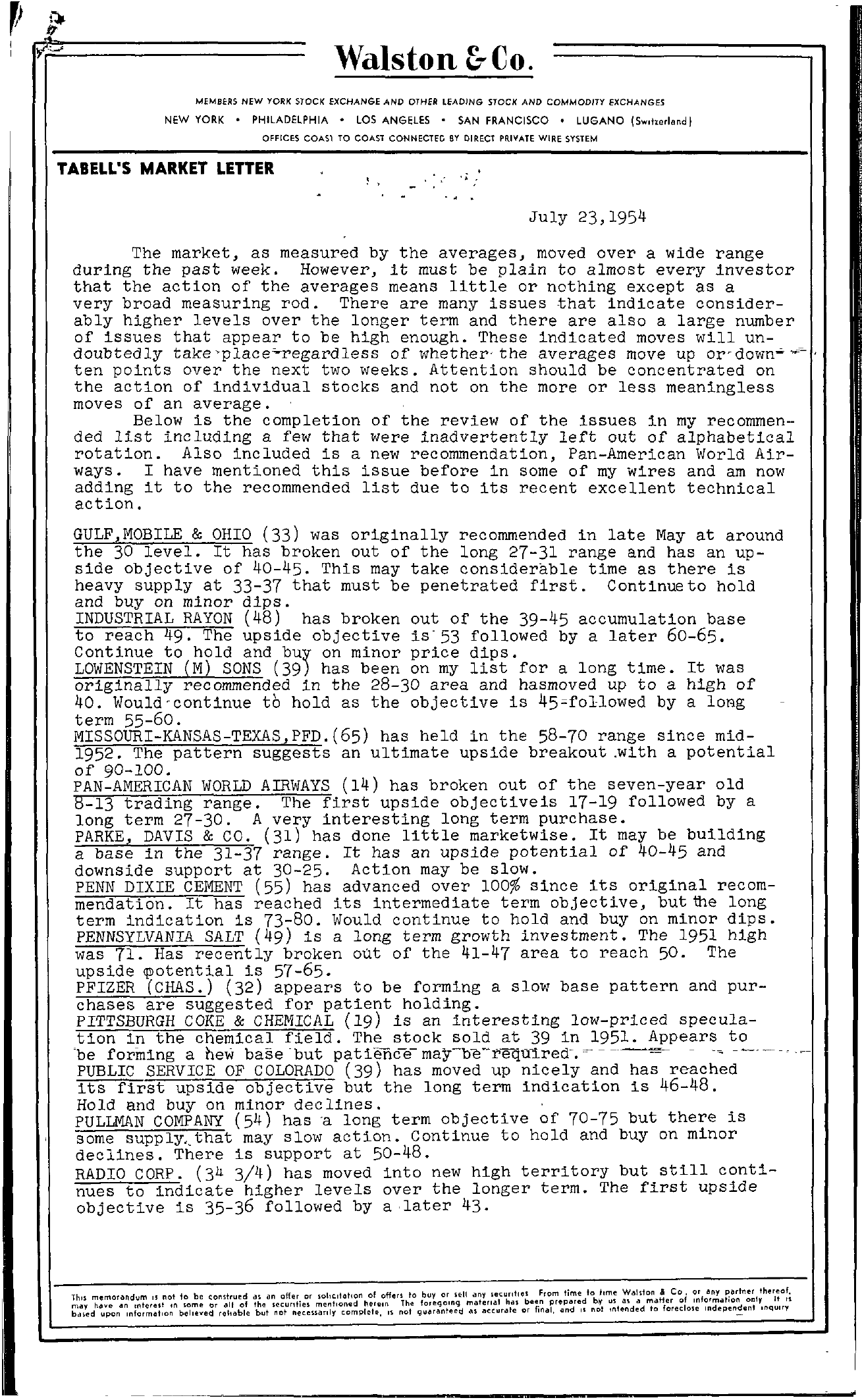 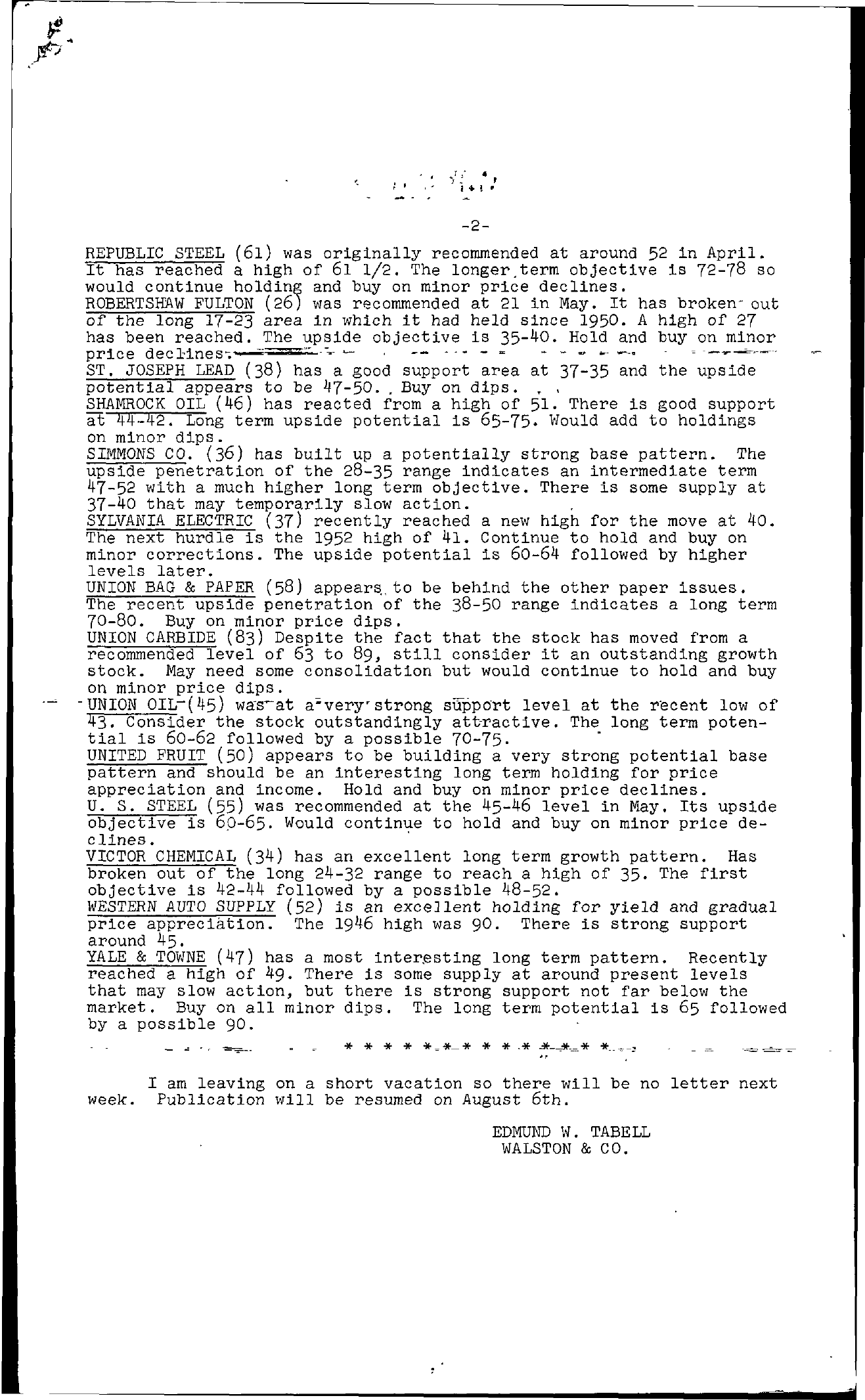