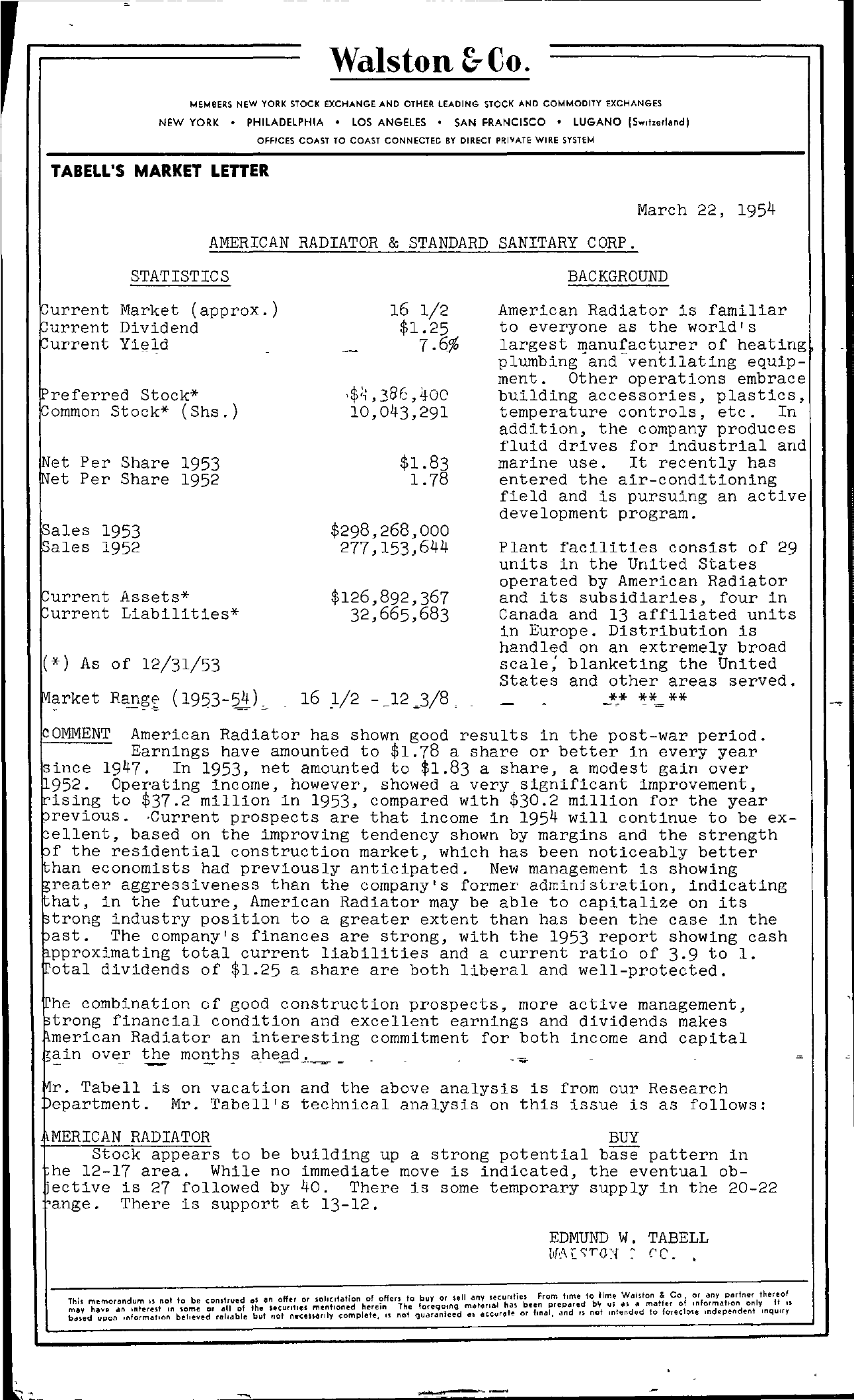 – – – – – – —– ——————— Walston &Co. MEMBERS NEW YORK STOCK EXCHANGE AND OTHER LEADING STOCK AND COMMODITY EXCHANGES NEW YORK PHILADELPHIA LOS ANGELES SAN FRANCISCO LUGANO (Sw,t,ldl OFFICES COAST TO COAST CONNECTEC BY DIRECT PRIVATE WIRE SYSTEM TABEll'S MARKET lEnER March 22, 1954 AMERICAN RADIATOR & STANDARD SANITARY CORP. STATISTICS BACKGROUND purrent Market (approx.) urrent Dividend urrent Yield referred Stock rommon Stock (Shs.) Net Per Share 1953 Net Per Share 1952 Sales 1953 Sales 1952 Current Assets Current Liabilities () As of 12/31/53 Market Range (1953-54). –; – -o 16 1/2 1.25 7.6 .;; ,38(; , itoo 10,043,291 1.83 1.78 298,268,000 277,153,644 126,892,367 32,665,683 American Radiator is familiar to everyone as the world's largest manufacturer of heating plumbing-and-ventilating equipment. Other operations embrace building accessories, plastics, temperature controls, etc. In addition, the company produces fluid drives for industrial and marine use. It recently has entered the air-conditioning field and is pursuing an active development program. Plant facilities consist of 29 units in the United States operated by American Radiator and its subsidiaries, four in Canada and 13 affiliated units in Europe. Distribution is handled on an extremely broad scale; blanketing the United States and other areas served. – – COMMENT American Radiator has shown good results in the post-war period. Earnings have amounted to 1.78 a share or better in every year since 1947. In 1953, net amounted to 1.83 a share, a modest gain over 952. Operating income, however, showed a very significant improvement, ising to 37.2 million in 1953, compared with 30.2 million for the year )revious. -Current prospects are that income in 1954 will continue to be ex- ellent, based on the improving tendency shown by margins and the strength )f the residential construction market, which has been noticeably better chan economists had previously anticipated. New management is showing 5reater aggressiveness than the company's former adinjstration, indicating chat, in the future, American Radiator may be able to capitalize on its strong industry position to a greater extent than has been the case in the )ast. The company's finances are strong, with the 1953 report showing cash rPproximating total current liabilities and a current ratio of 3.9 to 1. rotal dividends of 1.25 a share are both liberal and well-protected. he combination of good construction prospects, more active management, trong financial condition and excellent earnings and dividends makes merican Radiator an interesting commitment for both income and capital in over m0l2.ths ahead. . 0 ; ; – -,r. Tabell is on vacation and the above analysis is from our Research )epartment. Mr. Tabell's technical analysis on this issue is as follows MERICAN RADIATOR BUY Stock appears to be building up a strong potential base pattern in he 12-17 area. While no immediate move is indicated, the eventual ob- ective is 27 followed by 40. There is some temporary supply in the 20-22 ange. There is support at 13-12. EDMUND W. TABELL