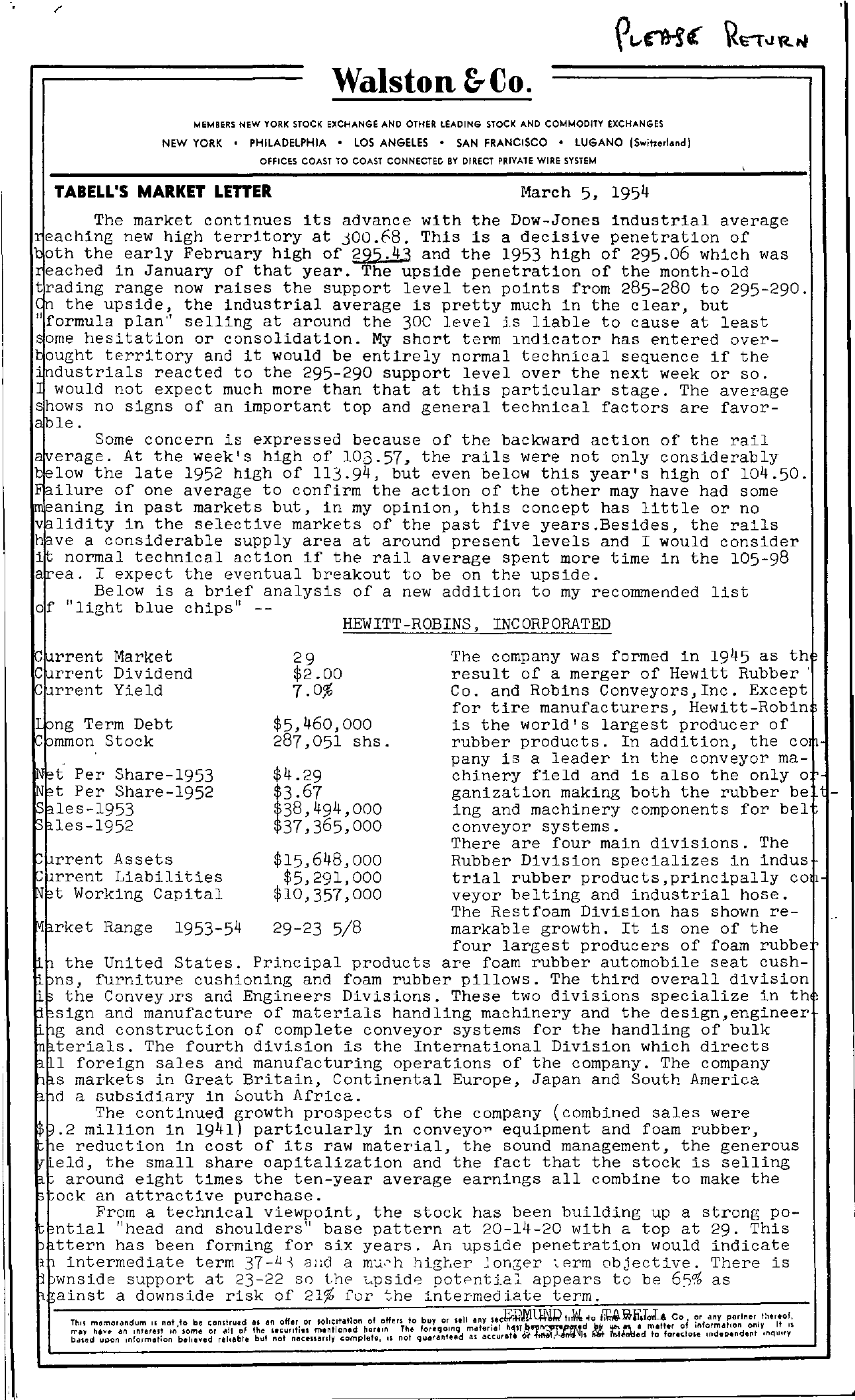 . Walston &Co. MEMBERS NEW YORK STOCK EXCHANGE AND OTHER LEADING STOCK AND COMMODITY EXCHANGES NEW YORK PHILADELPHIA LOS ANGELES SAN FRANCISCO LUGANO ISwa,..IdJ OFFICES COAST TO COAST CONNECTEC BY DIRECT PRIVATE WIRE SYStEM TABELL'S MARKET LETTER March 5, 1954 The market continues its advance with the Dow-Jones industrial average Ireaching new high territory at joo.68. This is a decisive penetration of oth the early February high of 295.43 and the 1953 high of 295.06 which was eached in January of that year. The upside penetration of the month-old trading range now raises the support level ten pOints from 285-280 to 295-290. er the upside, the industrial average is pretty much in the clear, but formula plan selling at around the 30C level ts liable to cause at least orne heSitation or consolidation. My short term lndicator has entered overought territory and it would be entirely normal technical sequence if the 'rdustrials reacted to the 295-290 support level over the next week or so. would not expect much more than that at this particular stage. The average shows no signs of an important top and general technical factors are favor- fble. Some concern is expressed because of the backward action of the rail verage. At the week's high of 103.57. the rails were not only considerably below the late 1952 high of 113.94, but even below this year's high of 104.50. ailure of one average to confirm the action of the other may have had some eaning in past markets but, in my opinion, this concept has little or no validity in the selective markets of the past five years.Besides, the rails ave a considerable supply area at around present levels and I would consider it normal technical action if the rail average spent more time in the 105-98 rea. I expect the eventual breakout to be on the upside. Below is a brief analysis of a new addition to my recommended list of light blue chips — HEWITT-ROBINS, INCORPORATED urrent Market 29 The company was formed in 1945 as th Current Dividend 2.00 result of a merger of Hewitt Rubber' 1rrent Yield 7.0 Co. and Robins Conveyors,Inc. Except for tire manufacturers, Hewitt-Robin png Term Debt 5,460,000 is the world's largest producer of pmmon Stock 287,051 shs. rubber products. In addition, the co pany is a leader in the conveyor ma- t Per Share-1953 4.29 chinery field and is also the only 0 r- t Per Share-1952 3.67 ganization making both the rubber be S3.1es-1953 38,494,000 ing and machinery components for bel les-1952 37,365,000 conveyor systems. There are four main divisions. The -rrent Assets 15,648,000 Rubber Division specializes in indus rrent Liabilities 5,291,000 trial rubber products,principally co t Working Capital 10,357,000 veyor belting and industrial hose. The Restfoam Division has shown re- irket Range 1953-54 29-23 5/8 markable growth. It is one of the four largest producers of foam rubbe the United States. Principal products are foam rubber automobile seat cush- ')ns, furniture cushioning and foam rubber pillows. The third overall division the ConveYJrs and Engineers Divisions. These two divisions specialize in th 2sign and manufacture of materials handling machinery and the design,engineer 'rg and construction of complete conveyor systems for the handling of bulk aterials. The fourth diviSion is the International Division which directs 1 foreign sales and manufacturing operations of the company. The company s markets in Great Britain, Continental Europe, Japan and South America rd a subsidiry in South Africa. The continued growth prospects of the company (combined sales were .2 million in 1941) particularly in conveyo eqUipment and foam rubber, re reduction in cost of its raw material, the sound management, the generous eld, the small share oapitalization and the fact that the stock is selling around eight times the ten-year average earnings all combine to make the -ock an attractive purchase. From a technical viewpoint, the stock has been building up a strong po- – ntial head and shoulders base pattern at 20-14-20 with a top at 29. This ttern has been forming for six years. An upside penetration would indicate , intermediate term 37- 4 ., aml a m.;.'h higr,er on;;er prm objective. There is bwnside support at 23-22 so t.he ,-,pside potpntial appears to be 6,, as rainst a downside risk of 21 for ,he intermediate term. . ofThIS il!tA.drray momOfndum II not.to be havr- dll Inlafllll! III some .;onltrued or dH of , 'In offer, or 10lil;ltltl0 of offers to the CUfltl m.ntloned hor11 The buy or u foregOing IImaantyerialIl('1h'trtTht.Itlisd-tobltf 1i9E'Jao.m;toa.t6tfeorCr,ocl or any partner thereof, information only It 1\ ose IndllP,ndllnt ,nqulry basd upon ,nformation believed rellllbte but not neclIIUlnly complllhl, IS not gUlIrdnteed iH lIccurli , ,, ,