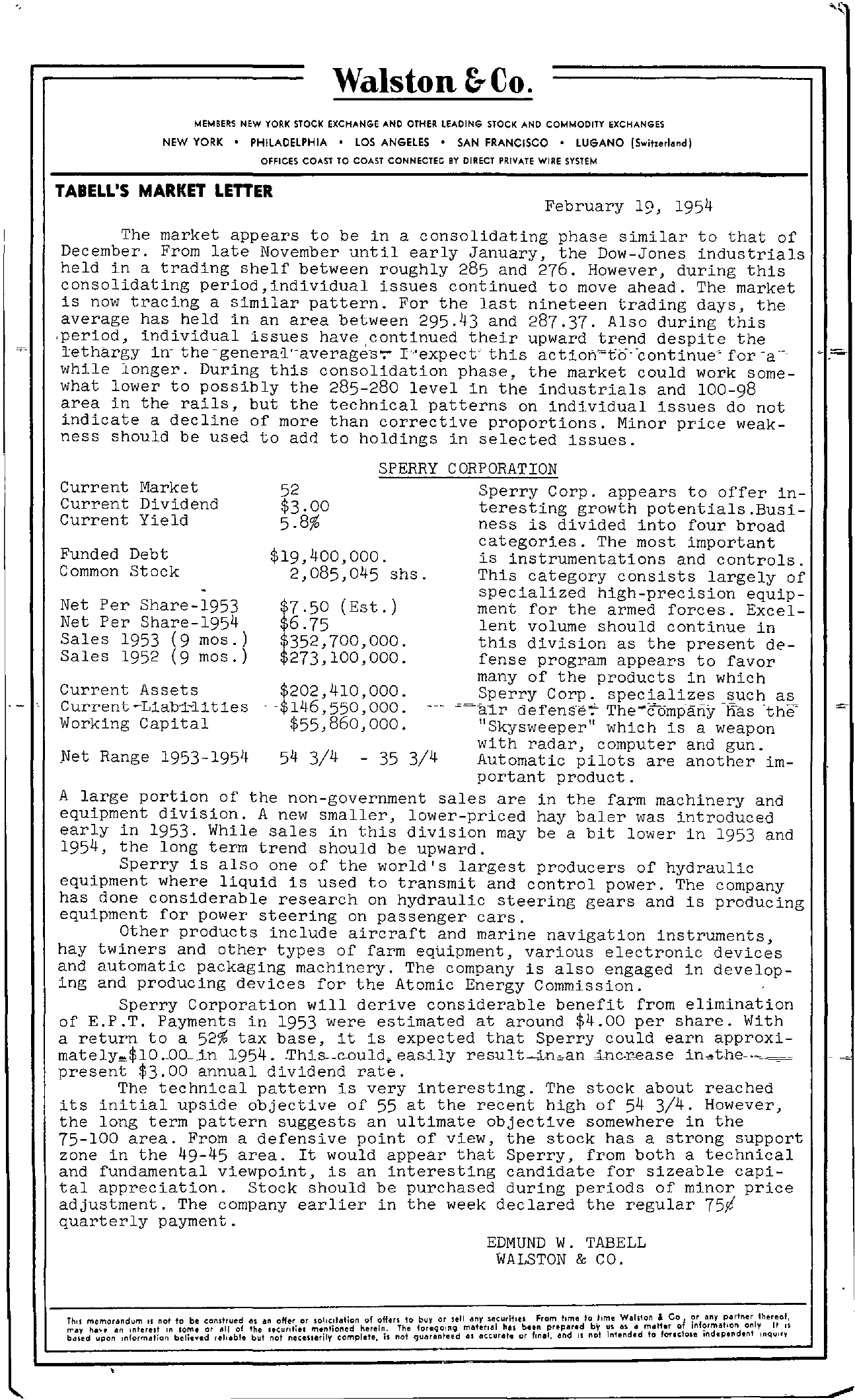 Walston &Co. MEMBERS NEW YORK STOCK EXCHANGE AND OTHER LEADING STOCK AND COMMODITY EXCHANGES NEW YORK PHILADELPHIA LOS ANGELES SAN FRANCISCO LUGANO (SwH,.d.,dl OFFICES COAST TO COAST CONNECTEC. BY OIRECT PRIVATE WIRE SYSTEM TABELL'S MARKET LETTER February 19, 1954 The market appears to be in a consolidating phase similar to that of December. From late November until early January, the Dow-Jones industrials held in a trading shelf between roughly 285 and 276. However, during this consolidating period, individual issues continued to move ahead. The market is now tracing a similar pattern. For the last nineteen trading days, the average has held in an area between 295.43 and 287.37. Also during this ,period, individual issues have continued their upward trend despite the 'tethargy in- the -genera'L'-average-s'7 I-expect- this actionto- -continue for -a– while longer. During this consolidation phase, the market could work somewhat lower to possibly the 285-280 level in the industrials and 100-98 area in the rails, but the technical patterns on individual issues do not indicate a decline of more than corrective proportions. Minor price weakness should be used to add to holdings in selected issues. SPERRY CORPORATION Current Market Current Dividend Current Yield 52 3.00 5.8 Sperry Corp. appears to offer interesting growth potentials.Busi- ness is divided into four broad Funded Debt Common Stock 19,400,000. 2,085,045 shs. categories. The most important is instrumentations and controls. This category consists largely of Net Per Share-1953 Net Per Share-1954 r.50 (Est.) 6.75 specialized high-precision equipment for the armed forces. Excel- lent volume should continue in Sales 1953 (9 mos.) 352,700,000. this division as the present de- Sales 1952 (9 mos.) 273,100,000. fense program appears to favor t many of the products in which — Current Assets 202 ,410,000. Current -Liab-i–iities – – 146,550,000. . — Sperry Corp. ttlr defemn''- specializes such as Thec-6mpaiiy -flas the – Working Capital 55,860,000. Skysweeper which is a weapon Net Range 1953-1954 54 3/4 – 35 3/4 with radar, computer and gun. Automatic pilots are another im- portant product. A large portion of the non-government sales are in the farm machinery and equipment division. A new smaller, lower-priced hay baler was introduced early in 1953. While sales in this division may be a bit lower in 1953 and 1954, the long term trend should be upward. Sperry is also one of the world's largest producers of hydraulic equipment where liquid is used to transmit and control power. The company has done considerable research on hydraulic steering gears and is producing equipment for power steering on passenger cars. Other products include aircraft and marine navigation instruments, hay twiners and other types of farm equipment, various electronic devices and automatic packaging machinery. The company is also engaged in developing and producing devices for the Atomic Energy Commission. Sperry Corporation will derive considerable benefit from elimination of E.P.T. Payments in 1953 were estimated at around 4.00 per share. With a return to a 52 tax base, it is expected that Sperry could earn approximately,lO .DOin 1954. -This–could. easily result-inan nC-I'ease inthe-.—- present 3.00 annual dividend rate. The technical pattern is very interesting. The stock about reached its initial upside objective of 55 at the recent high of 54 3/4. However, the long term pattern suggests an ultimate objective somewhere in the 75-100 area. From a defensive point of view, the stock has a strong support zone in the 49-45 area. It would appear that Sperry, from both a technical and fundamental viewpoint, is an interesting candidate for sizeable capital appreciation. Stock should be purchased during periods of minor price adjustment. The company earlier in the week declared the regular 751 quarterly payment. EDMUND W. TABELL WALSTON & CO. ..nTIbrh'llYul dmhaeump.oonrdannIdnIulnomtremrIeItsitnoonItn to be construed some or all of beli….ed reliable lI an offer or the cuntiel SOIIC!tatlon of tfers to me,nhoned herein.. The fbouryeqolr ngsedIIm!/IIcahl'fil\s but not ntlllarily complete, 1 not guarlln ee lIS accur e or From time to time Wallton & Co, or any pllrtnr thereof, preplIrld bV us as matter of information only It Ii f al and II not intended to foreclole independent Inqulrv In ,