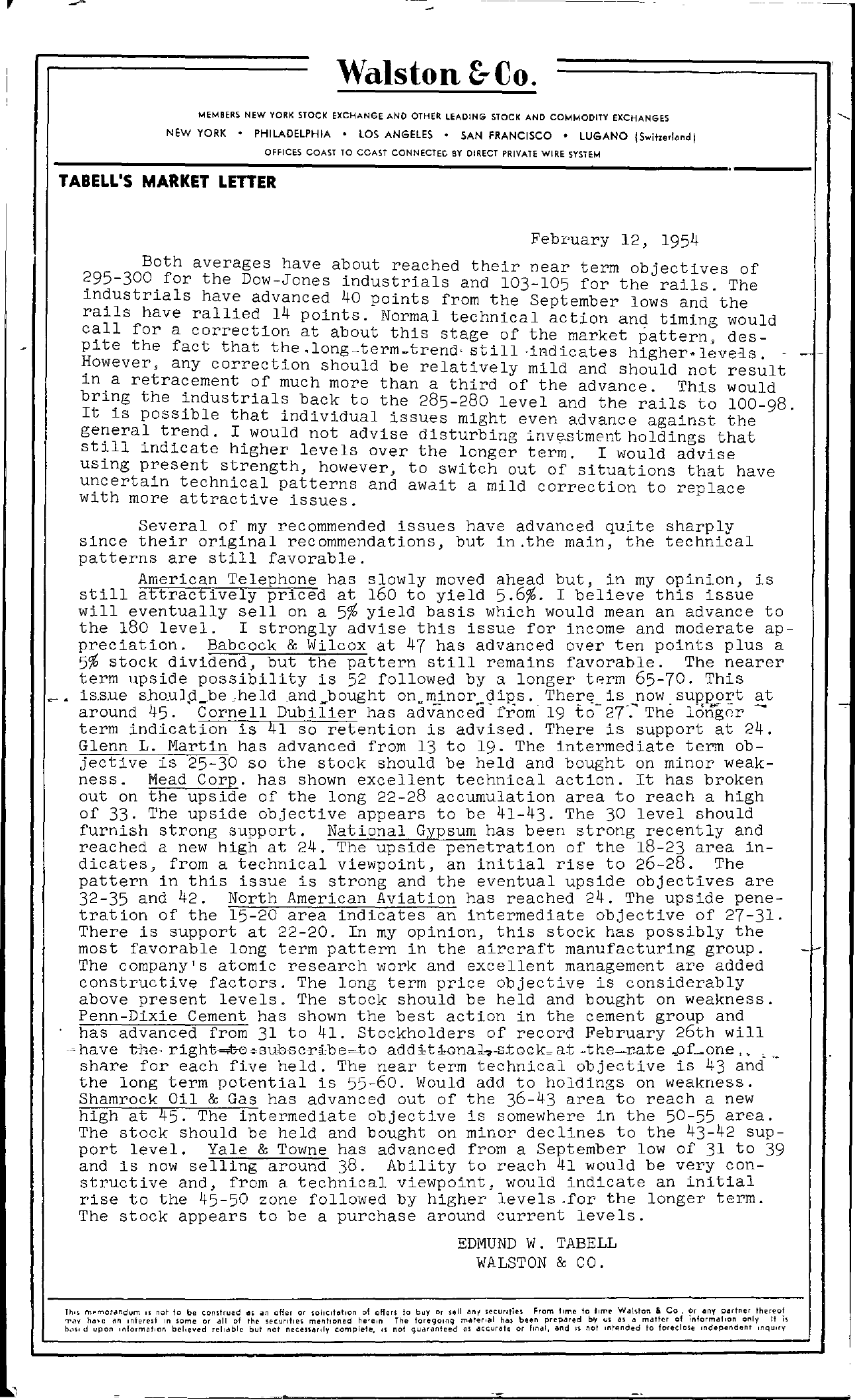 , Walston e- Co. ;- MEMBERS NEW YORK STOCK EXCHANGE ANO OTHER LEADING STOCK AND COMMODITY EXCHANGES NEW YORK PHILADELPHIA LOS ANGELES SAN FRANCISCO LUGANO SwH,'dl OFFICES COAST TO CCASi CONNECTEC ay DIRECT PRIVATE WIRE SYSTEM TAB Ell'S MARKET lETTER Febr-uary 12, 1954 Both averages have about reached their near term objectives of 95-300.for the Dow-Jones industrials and 103-105 for the rails. The Inustrlals hav advanced 40 points from the September lows and the ralls have rallled 14 points. Normal technical action and timing would call for a correction at about this stage of the market pattern, despite the fact that te.long-term.trend, still indicates higher.leves. owever, any correctlon should be relatively mild and should not result In.a retraement of much more than a third of the advance. This would brlng the lndustrial bc to te 285-280 level and the rails to 100-98. It is possible that lndlvldual lssues might even advance against the geera tend. I. would not advise disturbing inv.stment holdings that st711 lndlcate hlgher levels over the longer term. I would advise uSlng present strength, however, to sWitch out of situations that have ucertain technical patterns and await a mild correction to replace wlth more attractive issues. Several of my recommended issues have advanced quite sharply since their original recommendations, but in.the main, the technical patterns are still favorable. American Telephone has slowly moved ahead but, in my opinion, is still attractively priced at 160 to yield 5.6. I believe this issue will eventually sellon a 5 yield basis which would mean an advance to the 180 level. I strongly advise this issue for income and moderate appreciation. Babcock & Wilcox at 47 has advanced over ten points plus a 5 stock diVidend, but the pattern still remains favorable. The nearer term upside possibility is 52 followed by a longer tArm 65-70. This . is.s.ue sho.uJ dbe .. he Idand bought on. minor dips. Ther is now support at around 45 . . Cornell Dubiiier has advanced' from 19 to2T. The lOrlg0.r term indication is 41 so retention is advised. There is support at 24. Glenn L. Martin has advanced from 13 to 19. The intermediate term objective is 25-30 so the stock should be held and bought on minor weakness. Mead Corp. has shown excellent technical action. It has broken out on the upside of the long 22-28 accumulation area to reach a high of 33. The upside objective appears to be 41-43. The 30 level should furnish strong support. National Gypsum has been strong recently and reached a new high at 24. The upside penetration of the 18-23 area indicates, from a technical viewpoint, an initial rise to 26-28. The pattern in this issue is strong and the eventual upside objectives are 32-35 and 42. North American Aviation has reached 24. The upside penetration of the 15-20 area indicates an intermediate objective of 27-31. There is support at 22-20. In my opinion, this stock has possibly the most favorable long term pattern in the aircraft manufacturing group. -The company's atomic research work and excellent management are added constructive factors. The long term price objective is considerably above present levels. The stock should be held and bought on weakness. Penn-Dixie Cement has shown the best action in the cement group and has advanced from 31 to 41. Stockholders of record February 26th will have t-he- rightt0,sub-scTilbeto addit;honals.tGckat -the-rate ofone, . . , share for each five held. The near term technical objective is 43 and the long term potential is 55-60. Would add to holdings on weakness. Shamrock Oil & Gas has advanced out of the 36-43 area to reach a new high at 45. The intermediate objective is somewhere in the 50-55 area. The stock should be held and bought on minor declines to the 43-42 support level. Yale & Towne has advanced from a September low of 31 to 39 and is now selling around 38. Ability to reach 41 would be very constructive and, from a technical viewpoint, would indicate an initial rise to the 45-50 zone followed by higher levels.for the longer term. The stock appears to be a purchase around current levels. EDMUND W. TABELL WALSTON & CO. Thl mpmorclndum 15 not io be c;onsirued as an offer or SollClht,on of offers to buy or sell ani secur.liu From t'me to me Wa\\lon & Co, or any partner thereof l',)Y haH an ,nleresl In some or III of Ihe securities mentioned he'e,n The foregolnq mater,.!!1 h,u been prepared b., Y5 a5 a matt!)r of informal,on only It is b., d ypon ,rormhon b!)l,eyed reliable byl not necenardy complete, Ii not qUiHnteed a5 accurate or fln(ll, and I' not Intended to foreclose Independent Inqu,ry ,,