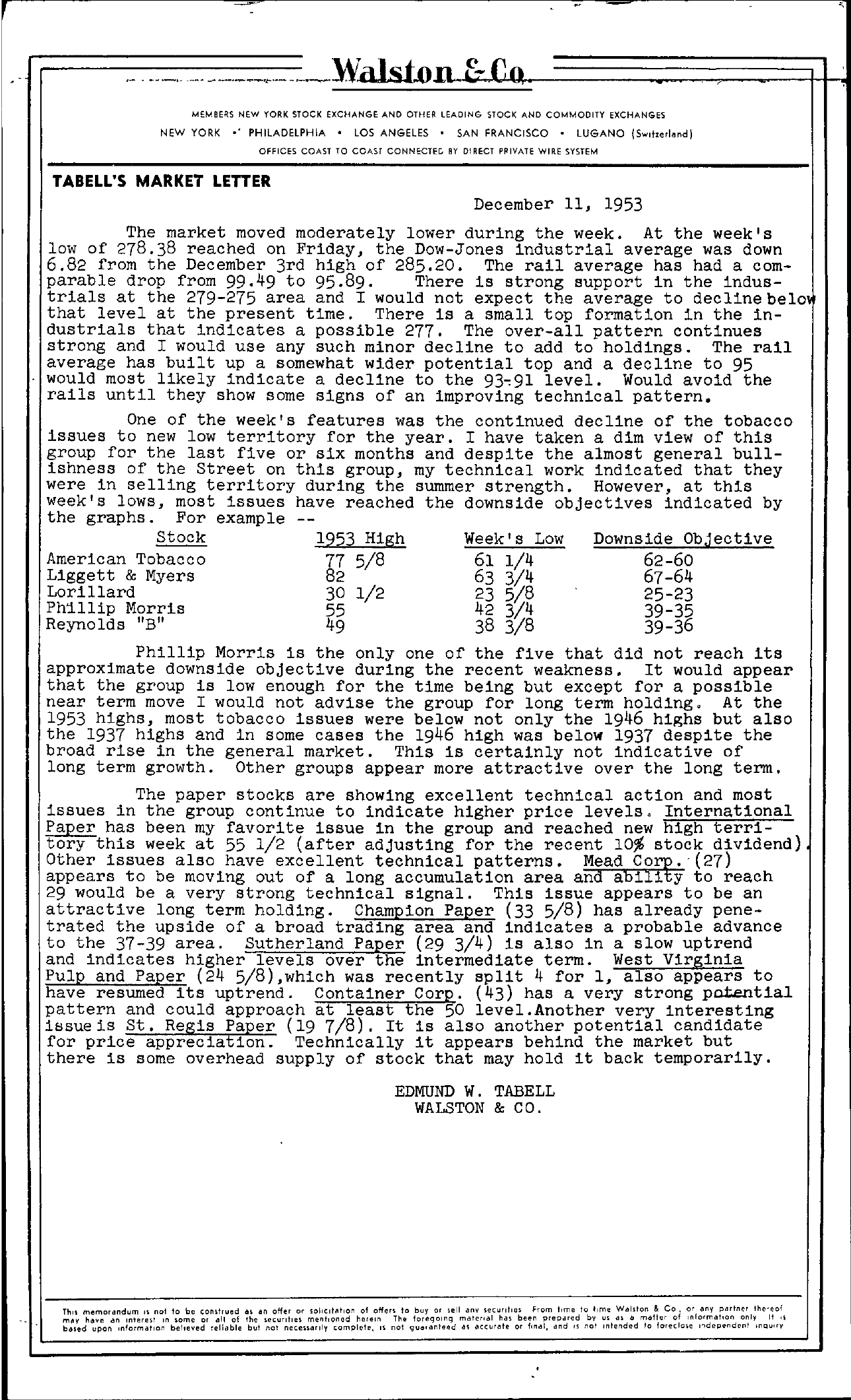 MEMBERS NEW YORK STOCK EXCHANGE AND OTHER LEADING STOCK AND COMMODITY EXCHANGES .0NEW YORK PHILADElPHIA LOS ANGELES SAN FRANCISCO LUGANO (Swlherland) OFFICES COAST TO COAST CONNECTEC BY DIRECT PPIVATE WIRE SYSTEM TABELL'S MARKET LETTER December 11, 1953 The market moved moderately lower during the week. At the week's low of 278.38 reached on Friday, the Dow-Jones industrial average was down 6.82 from the December 3rd high of 285.20. The rail average has had a comparable drop from 99.49 to 95.89. There is strong support in the industrials at the 279-275 area and I would not expect the average to declinebelol that level at the present time. There is a small top formation in the industrials that indicates a possible 277. The over-all pattern continues strong and I would use any such minor decline to add to holdings. The rail average has built up a somewhat wider potential top and a decline to 95 would most likely indicate a decline to the 9391 level. Would avoid the rails until they show some signs of an improving technical pattern. One of the week's features was the continued decline of the tobacco issues to new low territory for the year. I have taken a dim view of this group for the last five or six months and despite the almost general bull- ishness of the Street on this group, my technical work indicated that they were in selling territory during the summer strength. However, at this week's lows, most issues have reached the downside objectives indicated by the graphs. For example — Stock 1953 High Week's Low Downside Objective American Tobacco Liggett & Myers Lorillard Phillip Morris Reynolds B 77 5/8 82 30 1/2 55 49 61 1/4 63 3/4 23 5/8 42 3/4 38 3/8 62-60 67-64 25-23 39-35 39-36 Phillip Morris is the only one of the five that did not reach its approximate downside objective during the recent weakness. It would appear that the group is low enough for the time being but except for a possible near term move I would not advise the group for long term holding. At the 1953 highs, most tobacco issues were below not only the 1946 highs but also the 1937 highs and in some cases the 1946 high was below 1937 despite the broad rise in the general market. This is certainly not indicative of long term growth. Other groups appear more attractive over the long term. The paper stocks are showing excellent technical action and most issues in the group continue to indicate higher price levels. International Paper has been my favorite issue in the group and reached new high territory this week at 55 1/2 (after adjusting for the recent 10 stock dividend) Other issues also have excellent technical patterns. Mead Co.-(27) appears to be moving out of a long accumulation area and ability to reach 29 would be a very strong technical signal. This issue appears to be an attractive long term holding. Champion Paper (33 5/8) has already penetrated the upside of a broad trading area and indicates a probable advance to the 37-39 area. Sutherland Paper (29 3/4) is also in a slow uptrend and indicates higher levels over the intermediate term. West Virginia Pulp and Paper (24 5/8) ,which was recently split 4 for 1, also appears to have resumed its uptrend. Container Corp. (43) has a very strong potential pattern and could approach at least the 50 level.Another very interesting issueis St. Regis Paper (19 7/8). It is also another potential candidate for price appreciation. Technically it appears behind the market but there is some overhead supply of stock that may hold it back temporarily. EDMUND W. TABELL WALSTON & CO. Th mernordndum I not to be ,on!rued ,n an offer or 5011(1Ial,on 01 offer!. to buy or sell anv secuntlQs From t,me to lime Wdlston & Co. or any partner the'col mav hdV(! ell) Interelt In !oomc Of ali of the sccurltles mentioned herein The toregolng mille,,1 hilS been prepared by us as a maHH of ,nformat,on only It 1\ bdled upon onformatlon believed reliable but flot necenarlly complcl. Ii n01 guaranteed as aCC\lf'lte or final, dnd IS not Intended to forectoc l'ldcpendcnt ,nquHV