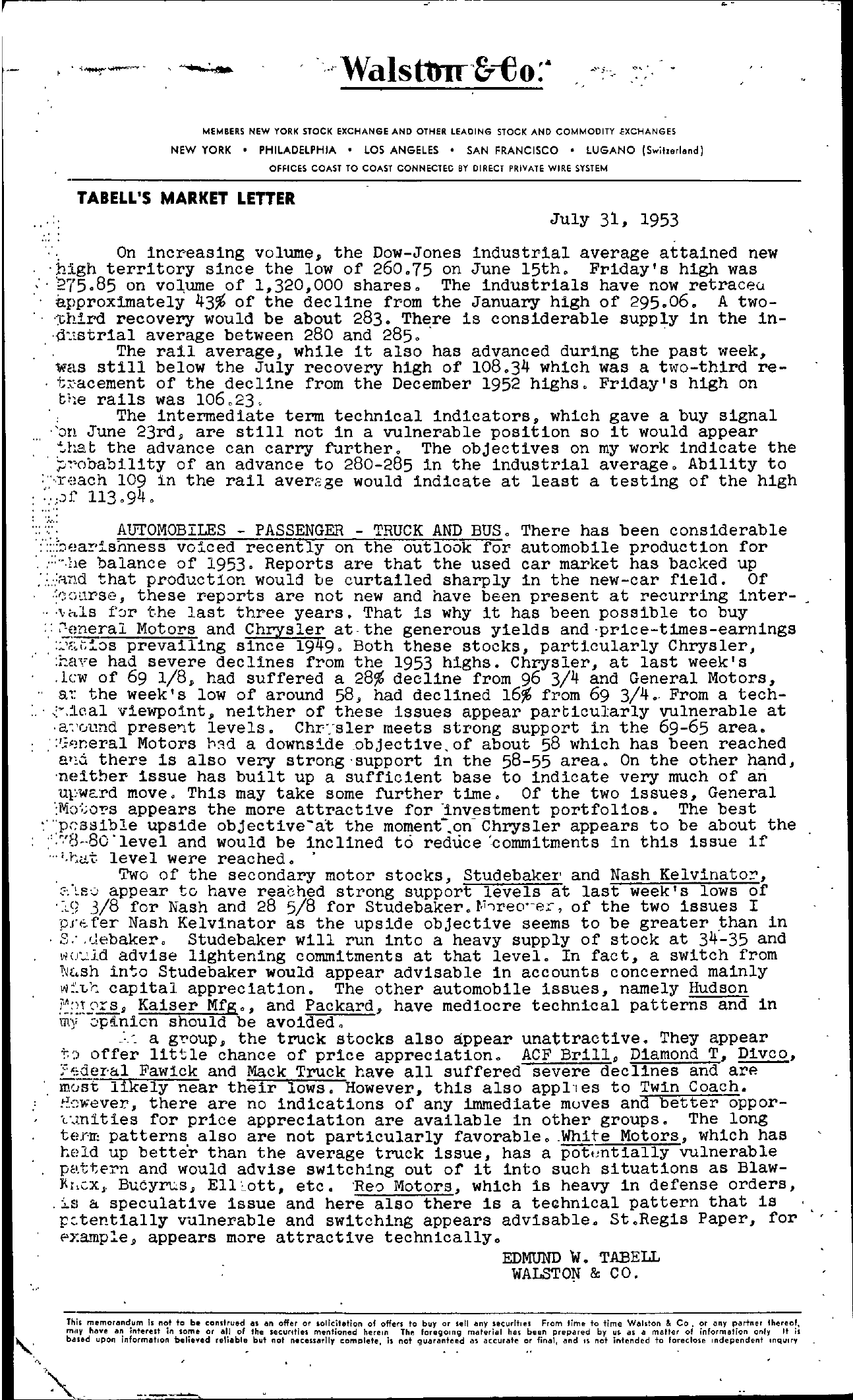 r MEMBERS NEW YORK STOCK EXCHANGE AND OTHER LEADING STOCK AND COMMODITY .EXCHANGES NEW YORK PHILADELPHIA LOS ANGELES SAN FRANCISCO LUGANO ISwihed.,dj OFFICES COAST TO COAST CONNECTEC BY DIRECT PRIVATE WIRE SYSTEM TABELL'S MARKET LETTER July 31, 1953 , On increasing volume. the Dow-Jones industrial average attained new , 'high territory since the low of 260.75 on June 15th. Friday's high was ,' '2(5.85 on vo,ume of 1,320,000 shares. The industrials have now retrac;!u approximately 43 of the decline from the January high of 295.06. A two- 'J;hird recovery would be about 283. There is considerable supply in the in- 'dlstrial average between 280 and 285. ' , The rail average, while it also has advanced during the past week, was still below the July recovery high of 108.34 which was a two-third re- , i;;acement of the decline from the December 1952 highs. Friday's high on tile rails was 106.23, , The intermediate term technical indicators, which gave a buy signal .., on June 23rd, are still not in a vulnerable position so it would appear ,hat the advance can carry f'urther. The objectives on my work indicate the , ;,'()babili ty of an advance to 280-285 in the industrial average. Ability to ,.'.''nach 109 in the rail aversge would indicate at least a testing of the high ,.)1' 113.94. ., …,.,.', AUTOMOBILES – PASSENGER – TRUCK AND BUS. There has been considerable 'Ja!'isi'mess voiced recently on the outlook for automobile production for '-,he balance of 1953. Reports are that the used car market has backed up ,,,and that production would be curtailed sharply in the new-car field. Of '()LlrSe, these reports are not new and have been present at recurring inter- .. '''hIs for t.he last three years. That is why it has been possible to buy , '-eneral Motors and Chrysler at, the generous yields and ,price-times-earnings ,'c,ios prevailing Since 1949. Both these stocks, particularly Chrysler, l'ave had severe declines from the 1953 highs. Chrysler, at last week's ,lew 0 f 69 1/8, had suffered a 28 dec line from 96 3/4 and General Mot ors, .. a the week's low of around 58, had declined 16 from 69 3/4., From a tech,' ,',Lcal viewpoint, neither of these issues appear particularly vulnerable at ,a'01md prese'1t levels. Chc'sler meets strong support in the 69-65 area .' 1,;'JDeral Motors l'1'!d a downside objective, of about 58 which has been reached 8'10. there is also very strong 'support in the 58-55 area. On the other hand, 'nE!lther issue has built up a sufficient base to indicate very much of ari upward move. This may take some further time. Of the two issues, General 'lVi()';o'!'s appears the more attractive for 'investment portfolios. The best ' 'p,asible upside objective-a't the moment-.on' Chrysler appears to be about the ',7tl–80'level and would be inclined to reduce 'commitments in this issue if .., ',rlut level were reached. . , Two of the secondary motor stocks, Studebaker' and Nash Kelvinator, cc'LS appear to have reached strong support levels at last week's lows of 'c9 3/8 for Nash and 28 5/8 for Studebaker. /.i-,reo'e.-, of the two issues I PH, fer Nash Kelvlnator as the upside objective seems to be greater .than in , S ,'.lebaker. Studebaker will run into a heavy supply of s.tock at 34-35 and w\.I.cld advise lightening commitments at that level. In fact, a switch from ,sh in';o Studebaker would appear advisable in accounts concerned mainly w'L'r capital appreciation. The other automobile issues, namely Hudson r;,!,'rs, Kaiser Mfg., and Packard, have mediocre technical patterns and in my ;)p!Lnicn should be avoidedo ,,', a goup, the truck stocks also appear unattractive. They appear ') offer little chance of price appreciation. ACF Brill, Diamond T, Divco, ,der'al Fawlck and Mack Truck have all suffered severe declines and are iiii)s-t likely near their lows. However, this also appl'les to Twin Coach. !,;wever, there are no indications of any im!nediate muves and better opporc'.l,nities for price appreciation are available in other groups. The long tErll' patterns also are not particularly favorable. ,White Motors, Which has hEld up bette'r than the average truck issue, has a pottmtially vulnerable p',ti;ern and would advise switching out of it into such situations as Blaw- Rcx, Bucyrus, Ell '-ott, etc, 'Rea Motors, which is heavy in defense orders, ,i.E! a speculative issue and here also there is a technical pattern that is p,tentially vulnerable and switching appears advisable. St.Regis Paper, for pT.mp!e, appears more attractive technically. EDMUND W. TABELL WALSTO!i & CO. This memorandum h not to b. construed as an offer or solicitation of offers to buy or 14!!1I oIIny seCUrltl1ll From time to time W.,lston & Co. or any partner thereof, mlly hav, an interest in some or all of the securities mentioned herein Thill foregOing material hu been prepared by us as a matter of information only It is bued upon information believed reliable but not necenarlly comDlete, is not guaranteed as accurate or final, and IS not intended to foreclose Independent InqulfY