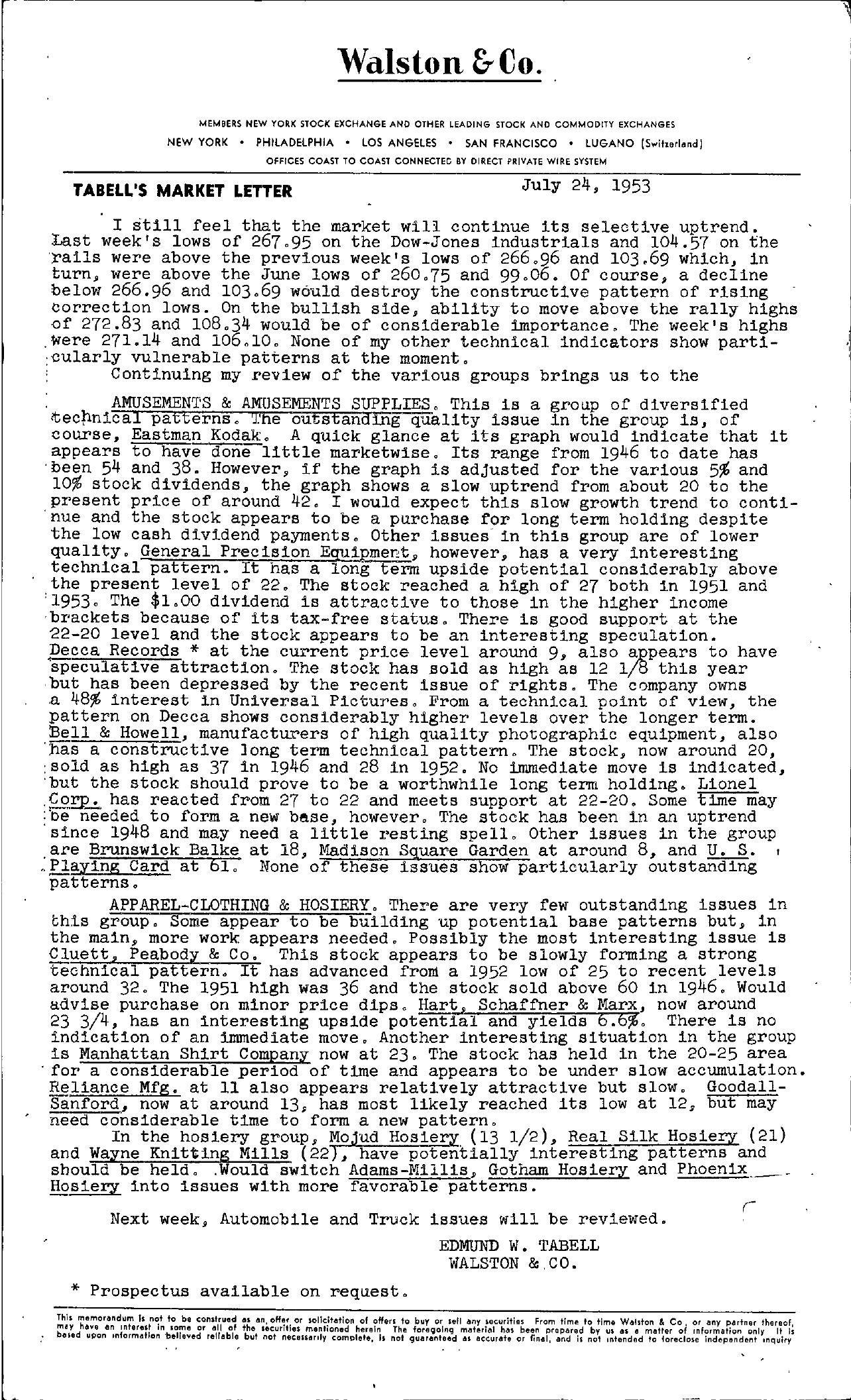 Walston &- Co. MEMBERS NEW YORK STOCK EXCHANGE AND OTHER LEADING STOCK AND COMMODITY EXCHANGES NEW YORK PHILADELPHIA LOS ANGELES SAN FRANCISCO LUGANO (Sw;t,ld) OFFICES COAST TO COAST CONNECTEC BY DIRECT PRIVATE WIRE SYSTEM TABEll'S MARKET lETTER July 24, 1953 I still feel that the market will continue its selective uptrend. Last week's lows of 267.95 on the Dow-Jones industrials and 104.57 on the 'rails were above the previous week's lows of 266.96 and 103.69 which, in turn, were above the June lows of 260.75 and 99.06. Of course, a decline below 266.96 and 103.69 would destroy the constructive pattern of rising correction lows. On the bullish side, ability to move above the rally highs of 272.83 and 108.34 would be of considerable importance. The week's highs ,were 271.14 and 106.10. None of my other technical indicators show parti- cularly vulnerable patterns at the moment. Continuing my review of the various groups brings us to the AMUSEMENTS & AMUSEMENTS SUPPLIES. This is a grollp of diversified tec/1nical patterns. ihe out8tandllig quality issue in the group is, of course, Eastman Kodak. A quick glance at its graph would indicate that it appears to have done little marketwise. Its range from 1946 to date has 'been 54 and 38. However, if the graph is adjusted for the various 5 and 10 stock dividends, the graph shows a slow uptrend from about 20 to the present price of around 42. I would expect this slow growth trend to conti- 'nue and the stock appears to be a pllrchase for long term holding despite the low cash dividend payments. Other issues'in this group are of lower quality. General Precision Equipment, however, has a very interesting technical pattern. It has a long term upside potential considerably above the present level of 22. The stock reached a high of 27 both in 1951 and 1953. The 1.00 dividend is attractive to those in the higher income 'brackets because of its tax-free status. There is good support at the 22-20 level and the stock appears to be an interesting speculation. Decca Records at the current price level around 9, also pears to have speculative attraction. The stock has 801d as high as 12 l/ this year but has been depressed by the recent issue of rights. The company owns a 48 interest in Universal Pictures. From a technical point of view, the pattern on Decca shows considerably higher levels over the longer term. Bell & Howell, manufactQers of high quality photographic eqUipment, also 'has a constructive Jong term technical pattern. The stock, now around 20, sold as high as 37 in 1946 and 28 in 1952. No immediate move is indicated, 'but the stock should prove to be a worthwhile long term holding. Lionel ,op has reacted from 27 to 22 and meets support at 22-20. Some time may 'be needed to form a new base, however. The stock has been in an uptrend 'since 1948 and may need a little I'esting spelL Other issues in the group ,are Brunswick Balke at 18, Madison Square Garden at around 8, and U. S. , .Playing Card at 6L None of these issues show particularly outstanding patterns. APPAREL-CLOTHING & HOSIERY. There are very few outstanding issues in chis group. Some appear to be building up potential base patterns but, in the main, more work appears needed. Possibly the most interesting issue is Cluett, Peabody & Co. This stock appears to be slowly forming a strong technical pattern. It has advanced from a 1952 low of 25 to recent levels around 32. The 1951 high was 36 and the stock sold above 60 in 1946. Would advise purchase on minor price dips. Hart, Schaffner & Marx, now around 23 3/4, has an interesting upside potential and yields 6.6. There is no indication of an immediate move. Another interesting situation in the group is Manhattan Shirt Company now at 23. The stock has held in the 20-25 area . for a considerable period of time and appears to be under slow accumUlation. Reliance Mfg. at 11 also appears relatively attractive but slow. GoodallSanford, now at around 13, has most likely reached its low at 12, but may need considerable time to form a new pattern. In the hosiery group, MoJud Hosiery (13 1/2), Real Silk Hosiery (21) and Wayne Knitting Mills, (22), have potentially interesting patterns and should be held . Would switch AdamS-Millis, Gotham HOSiery and Phoenix. HOSiery into issues with more favorable patterns. Next week, Automobile and Truck issues will be reviewed. EDMUND W. TABELL WALSTON &, CO. Prospectus available on request. Tmhiys memorandum Is not to be have an Intered In some construed or all of III 4n, oHr or solic!tatton of oHers to buy or sell any securities From time to time the securities mentioned herein The fore!jlolng mtlteritll htls been prepared by us Wahton & Co, tiS tI mtltter of or any partner thereof, Information only It is btl sed upon Inform4tlon believed reliable but not necessarily complete, h not guartlnteed as accurtlte or !intll, tlnd is not Intended to foreclose indep&ndent Inquiry