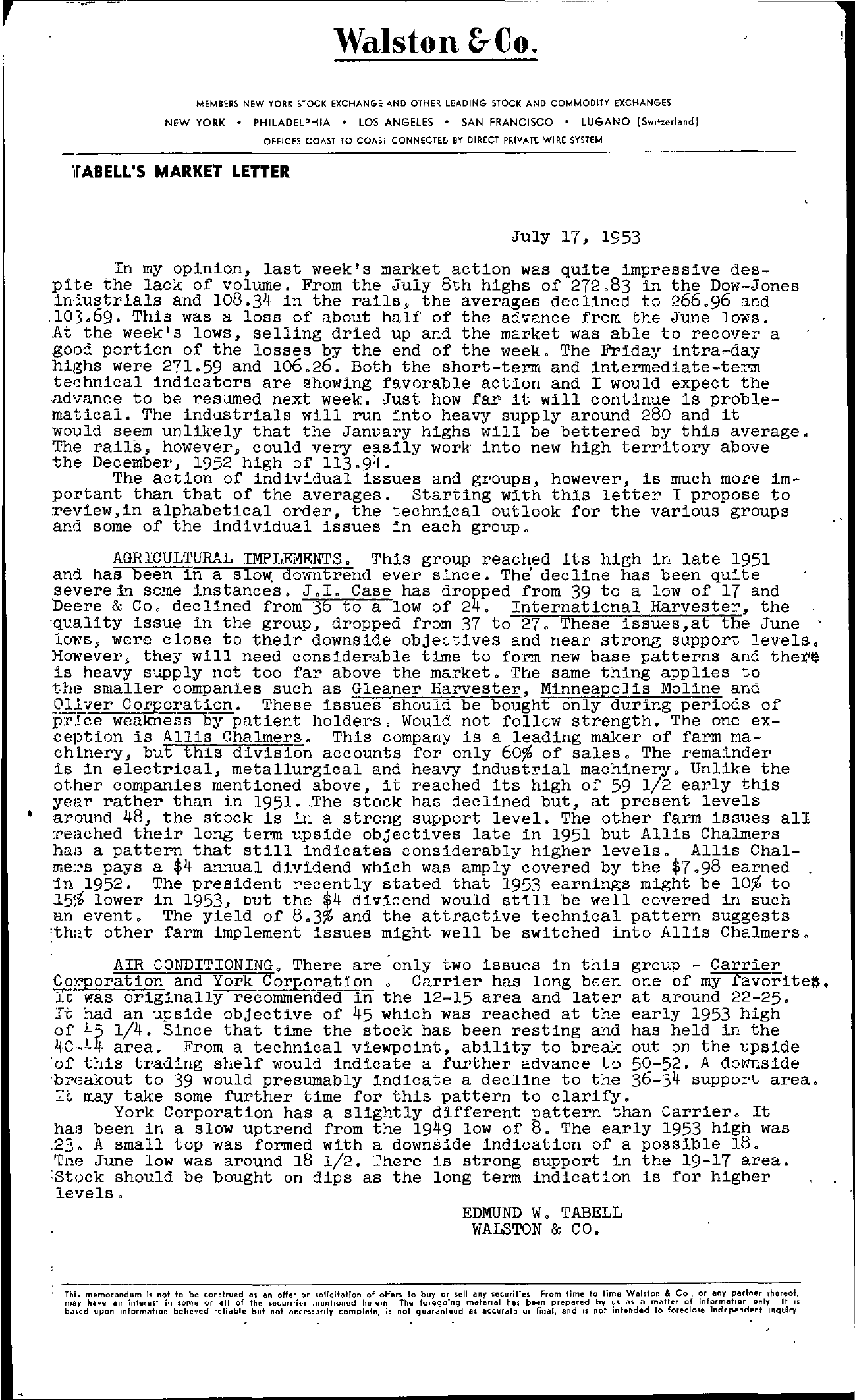 — -….. – – Walston &Co. MEMBERS NEW YORK STOCK EXCHANGE AND OTHER LEADING STOCK AND COMMODITY eXCHANGES NEW YORK PHILADELPHIA LOS ANGELES SAN FRANCISCO LUGANO (Sw,hed) OfFICES COAST TO COAST CONNECTEr; BY OIRECT PRIVATE WIRE SYSTEM 'rABELL'S MARKET LETTER July 17, 1953 In my opinion, last week's market action was quite impressive despite the lack of volume. From the July 8th highs of 272083 in the Dow-Jones industrials and 108.34 in the rails, the averages declined to 266096 and .103069. This was a loss of about half of the advance from the June lows. At the week's lows, selling dried up and the market was able to recover a good portion of the losses by the end of the weeko The Friday intra-day highs were 271059 and 106026. Both the short-term and intermediate-term teGhnical indicators are showing favorable action and I would expect the ..advance to be resumed next week 0 Just how far it will continue is problematical. The industrials will run into heavy supply around 280 and it would seem unlikely that the January highs will be bettered by this average. The rails, however, could very easily work into new high territory above th December, 1952 high of 113.94. The action of individual issues and groups, however, is much more important than that of the averages. Starting with this letter T propose to review,in alphabetical order, the technical outlook for the various groups and some of the individual issues in each groupo AGRICULTURAL IMPLEMENTS. This group reached its high in late 1951 and has been in a slow. downtrend ever since. The' decline has been quite severe i'1 scme instances. J.lo Case has dropped from 39 to a low of 17 and Deere & Co. declined from 36 to a low of 240 International Harvester, the 'qua.lity issue in the group, dropped from 37 to 270 These issues,at the June IONS, were close to their downside objectives and near strong support levels, IoNever, they will need considerable time to form new base patterns and the('e is heavy supply not too far above the market. The same thing applies to the smaller companies such as Gleane…. Harvester, Minneapolis Moline and 9l1ver cOkRoration. These issues should be bought only during periods of pr.lce wea eSs1iy patient holdel's 0 Would not follcw strength. The one ex- )eption is Allis Chalmers. This company is a leading maker of farm ma- chtnery, but this division accounts for only 60 of sales. The remainder is in electrical, metallurgical and heavy industial machinerx. Unlike the other companies mentioned above, it reached its high of 59 1/2 early this year rather than in 1951 ..'I'he stock has declined but, at present levels aound 48, the stock is in a strong support level. The other farm issues all J'eached their long term upside objectives late in 1951 but Allis Chalmers hal a pattern that still indicates considerably higher levels. Allis Chal- meJS pays a 4 annual dividend which was amply covered by the 7098 earned jn 1952. The president recently stated that 1953 earnings might be 10 to J.5j lower in 1953, out the 4 dividend would still be well covered in such an event. The yield of 8.3 and the attractive technical pattern suggests 'that other farm implement issues might well be switched into Allis Chalmers 0 AIR CONDITIONING. There are only two issues in this group – Carrier SQrporation and York Corporation. Carrier has long been one of my favoritee. LC was originally recommended in the 12-15 area and later at around 22-25. It had an upside objective of 45 which was reached at the early 1953 high of 45 1/4. Since that time the stock has been resting and has held in the 40,,44 area. From a technical viewpoint, ability to break out on the upside 'of this trading shelf would indicate a further advance to 50-52. A downside br'eakout to 39 would presumably indicate a decline to the 36-34 support area. may take some further time for this pattern to clarifyo York Corporation has a slightly different pattern than Carrier. It has been iD a slow uptrend from the 1949 low of 8. The early 1953 high was .230 A small top was formed with a downside indication of a possible 18. 'rl1e June low was around 18 1/2. There is strong support in the 19-17 area. Stock should be bought on dips as the long term indication is for higher levels 0 EDMUND W. TABELL WALSTON & CO. Thi. memorandum is not to be construed ,fit lin offer or solicitation of offers to buy or sell any securities From time to time Walston & Co, or any p.!lrtner Thereot, mat have an interest in 50me or all of the securities mentioned herel The foregoing material has been prepared by us as a matter of infrmatlon only It IS bllled upon Information believed reliable but not neeenanly complete, is not guaranteed lIS accurate or final, and IS not intended to foreclose Independent IIUjuiry