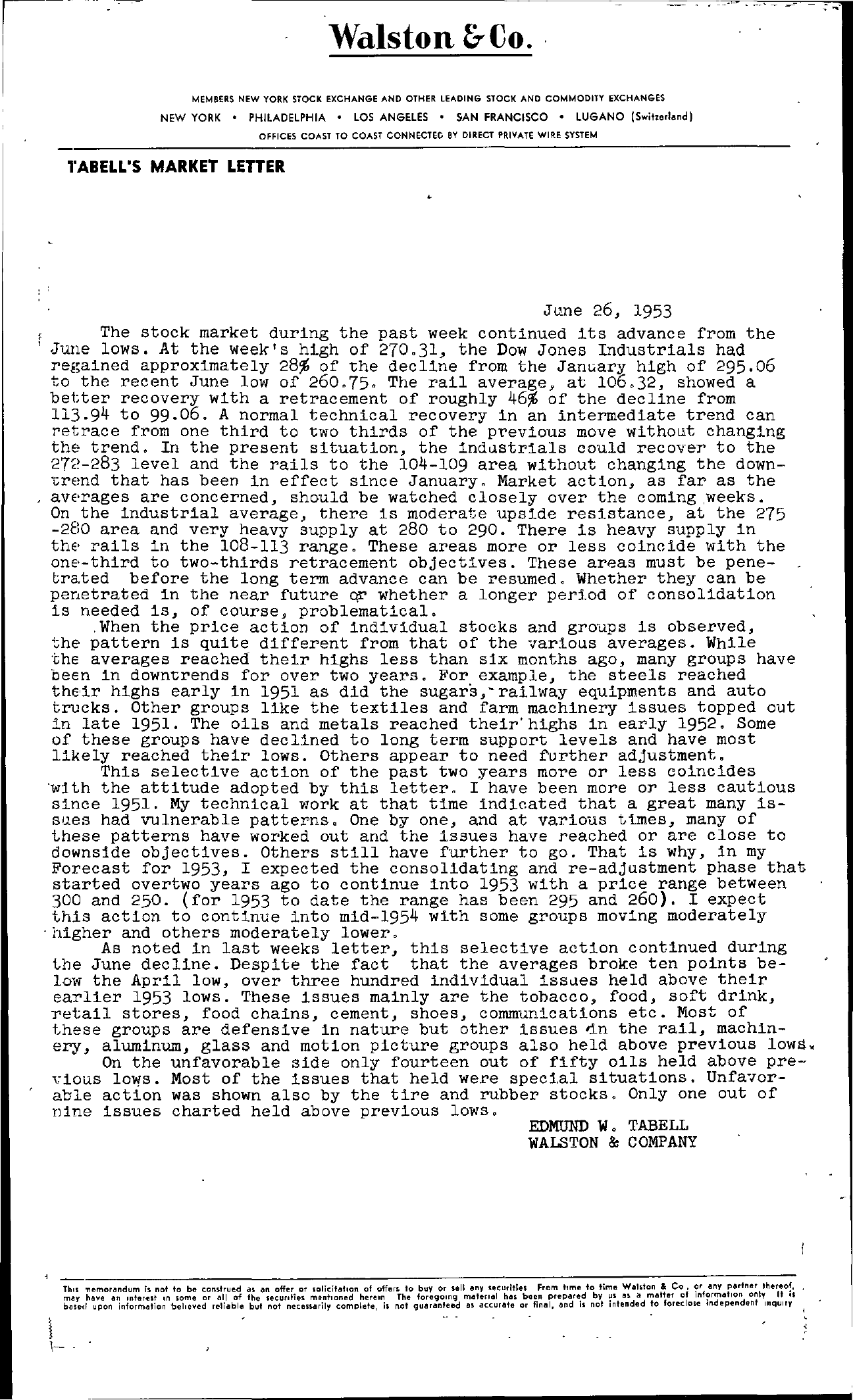 Walston &Uo. MEMBERS NEW YORK STOCK EXCHANGE AND OTHER LEADING STOCK AND COMMODITY EXCHANGES NEW YORK PHILADELPHIA LOS ANGELES SAN FRANCISCO LUGANO ISw;,I.,d) OFFICES COAST TO COAST CONNECTEC BY DIRECT PRIVATE WIRE SYSTEM 1'ABELL'S MARKET LETTER – . ……- June 26, 1953 The stock market during the past week continued its advance from the June lows. At the week's high of 270.31, the Dow Jones Industrials had regained approximately 28 of the decline from the January high of 295.06 to the recent June low of 260.75. The rail average, at 106.32, showed a better recovery with a retracement of roughly 46 of the decline from 113.94 to 99.06. A normal technical recovery in an intermediate trend can r'etrace from one third to two thirds of the previous move without changing the trend. In the present situation, the indllstrials could recover to the 27)-283 level and the rails to the 104-109 area without changing the down'crend that has been in effect since January. Market action, as far as the aVE'rages are concerned, should be watched closely over the coming ,weeks. On the industrial average, there is moderate upside resistance, at the 275 -2EiO area and very heavy supply at 280 to 290. There is heavy supply in thE' rails in the 108-113 range. These areas more or less coincide with the onE'-third to two-thirds retracement objectives. These areas must be penebra.ted before the long term advance can be resumed. Whether they can be penetrated in the near future Qr' whether a longer perlod of consolidation is needed is, of course, problematical. ,When the price action of individual stocks and groups is observed, the pattern is quite different from that of the various averages. While the averages reached their highs less than six months ago, many groups have been in downtrends for over two years. For example, the steels reached their highs early in 1951 as did the sugars,railway equipments and auto trucks. Other groups like the textiles and farm machinery issues topped out in late 1951. The oils and metals reached their'highs in early 1952. Some of these groups have declined to long term support levels and have most likely reached their lows. Others appear to need further adjustment. This selective action of the past two years more or less coincides 'with the attitude adopted by this letter. I have been more or less cautious since 1951. My technical work at that time indicated that a great many issues had vulnerable patterns. One by one, and at various times, many of these patterns have worked out and the issues have reached or are close to downside objectives. Others still have further to go. That is why, in my Forecast for 1953, I expected the consolidating and re-adjustment phase that started overtwo years ago to continue into 1953 with a price range between 300 and 250. (for 1953 to date the range has been 295 and 260). I expect this action to continue into mid-1954 with some groups moving moderately – higher and others moderately lower. As noted in last weeks letter, this selective action continued during the June decline. Despite the fact that the averages broke ten pOints below the April low, over three hundred individual isslles held above their earlier 1953 lows. These issues mainly are the tobacco, food, soft drink, retail stores, food chains, cement, shoes, communications etc. Most of these groups are defenSive in nature but other issues tin the ratl, machin- ery, aluminum, glass and motion picture groups also held above previous lows. On the unfavorable side only fourteen out of fifty oils held above pre,ious lows. Most of the issues that held were spec1.al situations. UnfalOrable action was shown also by the t1.re and rubber stocks. Only one out of nine issues charted held above previous lows. EDMUND W0 TABELL WALSTON & COMPANY ThIS emorandum is not to be construed as an offer or solicitation of offers to buy or sell any securities From time to time Walston & Co, or any partner thereo!, , may have an Interest In some or all of the lecuflties mentioned herem The foregOing matenal has been prepared by s as matter of Inf)Tmatlon only It IS based upon information believed reliable but not necenarily complete, h not gu.!!ranteed as accur.!!te or fin.!!l, and Is not Intended to foreclose mdependent InqUlTy I \ 1-