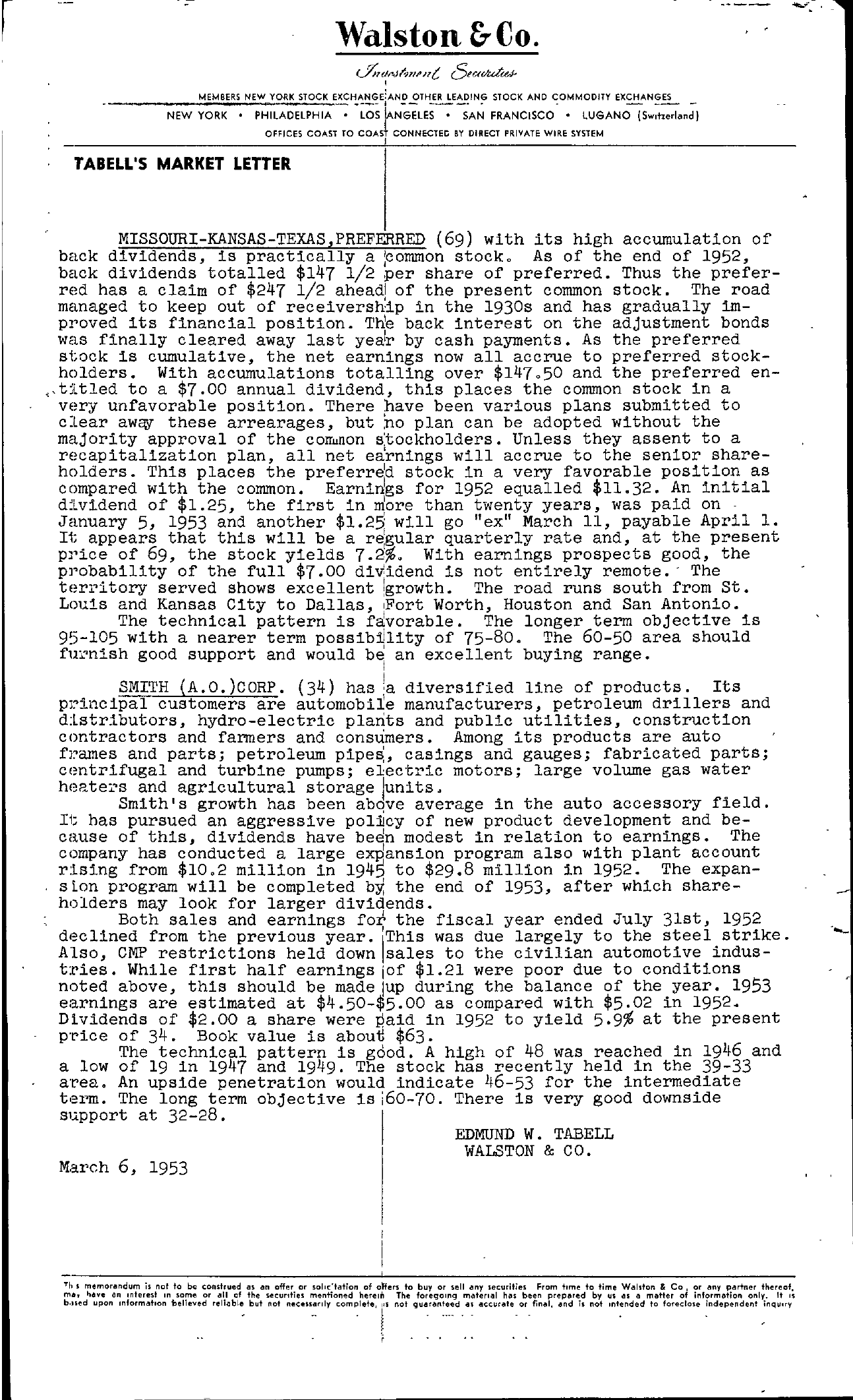 Walston &Co. ,dl..jI71nt c5ec((/uEte.J.. MEMBERS NEW YORK STOCK EXCHA-N…G.- EIANOOTH-ER LEADING. STOCK AND C-OMMODITY EXCHANGES – NEW YORK PHILADELPHIA LOS /ANGELES SAN FRANCISCO LUGANO (Sw,t,.,I.,dl OFfiCES COAST TO COAST CONNECTE BY DIRECT PRIVATE WIRE SYSTEM I TABELL'S MARKET LETTER ,-. – MISSOURI-KANSAS-TEXAS,PREFERRED (69) with its high accumulation of back dividends, is practically a 'common stock. As of the end of 1952, back dividends totalled 147 1/2 per share of preferred. Thus the prefer- red has a claim of 247 1/2 ahead! of the present common stock. The road managed to keep out of receivership in the 1930s and has gradually impl'oved its financial position. TH,e back interest on the adjustment bonds was finally cleared away last year by cash payments. As the preferred stock is cumulative, the net earnings now all accrue to preferred stockholders. With accumulations totalling over 147.50 and the preferred en' ti.tled to a 7.00 annual dividend, this places the common stock in a very unfavorable position. There have been various plans submitted to clear awqy- these arrearages, but no plan can be adopted without the majority approval of the corrunon stockholders. Unless they assent to a recapitalization plan, all net earnings will accrue to the senior shareholders. This places the preferre'd stock in a very favorable position as compared with the common. EarniJgs for 1952 equalled 11.32. An initial dLvidend of 1.25, the first in rriore than twenty years, was paid on January 5, 1953 and another 1.25 will go ex March 11, payable April 1. It appears that this will be a re'gular quarterly rate and, at the present pl'ice of 69, the stock yields 7.2. With earnings prospects good, the pl'obability of the full 7.00 diviidend is not entirely remote. – The territory served shows excellent Igrowth. The road runs south from St. Louis and Kansas City to Dallas, ,Fort Worth, Houston and San Antonio. The technical pattern is fvorable. The longer term objective is 95-105 with a nearer term possiblity of 75-80. The 60-50 area should fmnish good support and would bel an excellent buying range. SMITH (A.O.)CORP. (34) has!a diversified line of products. Its principal customers are automobile manufacturers, petroleum drillers and dlstrlbutors, hydro-electric plants and public utilities, construction contractors and farmers and consumers. Among its products are auto frames and parts; petroleum pipeS, casings and gauges; fabricated parts; centrifugal and turbine pumps; elech'ic motors; large volume gas water heate's and agricultural storage lunits, Smith's growth has been abqve average in the auto accessory field. It has pursued an aggressive polilcy of new product development and because of this, dividends have beEin modest in relation to earnings. The company has conducted a large eansion program also with plant account rising from 10.2 million in 1945 to 29.8 million in 1952. The expanston program will be completed bi the end of 1953, after which shareholders may look for larger dividends. Both sales and earnings fot the fiscal year ended July 31st, 1952 declined from the previous year. I'This was due largely to the steel strike. Also, CMF restrictions held down sales to the civilian automotive industries. While first half earnings jof 1.21 were poor due to conditions noted above, this should be made lup during the balance of the year. 1953 earnings are estimated at 4.50-5.00 as compared with 5.02 in 1952. Dividends of 2.00 a share were paid in 1952 to yield 5.9 at the present p'rice of 34. Book value is about 63. The technical pattern is good. A high of 48 was reached in 1946 and a low of 19 in 1947 and 1949. The stock has recently held in the 39-33 area. An upside penetration would indicate 46-53 for the intermediate It'I'Ill. The long term obj ec tive is i60-70. There is very good downside support at 32-28. EDMUND W. TABELL WALSTON & CO. March 6, 1953 Til s memorandum is not to bE! construed as an offer or soll!;'tation of o'ffers to buy or sell any securities From time to time Waldon & Co, or any partner thereof, mll, live an Interest til some or … 11 of the securities mentioned herein The foregOing matenal has been preplired by us as a matter of information only. It IS b.ned upon Informahon believed reliilble but not necessarily tomplete, lIS not gUllfllnteed as lIccurate or fin.,l, and is not Intended to foreclose independent inqUiry I c