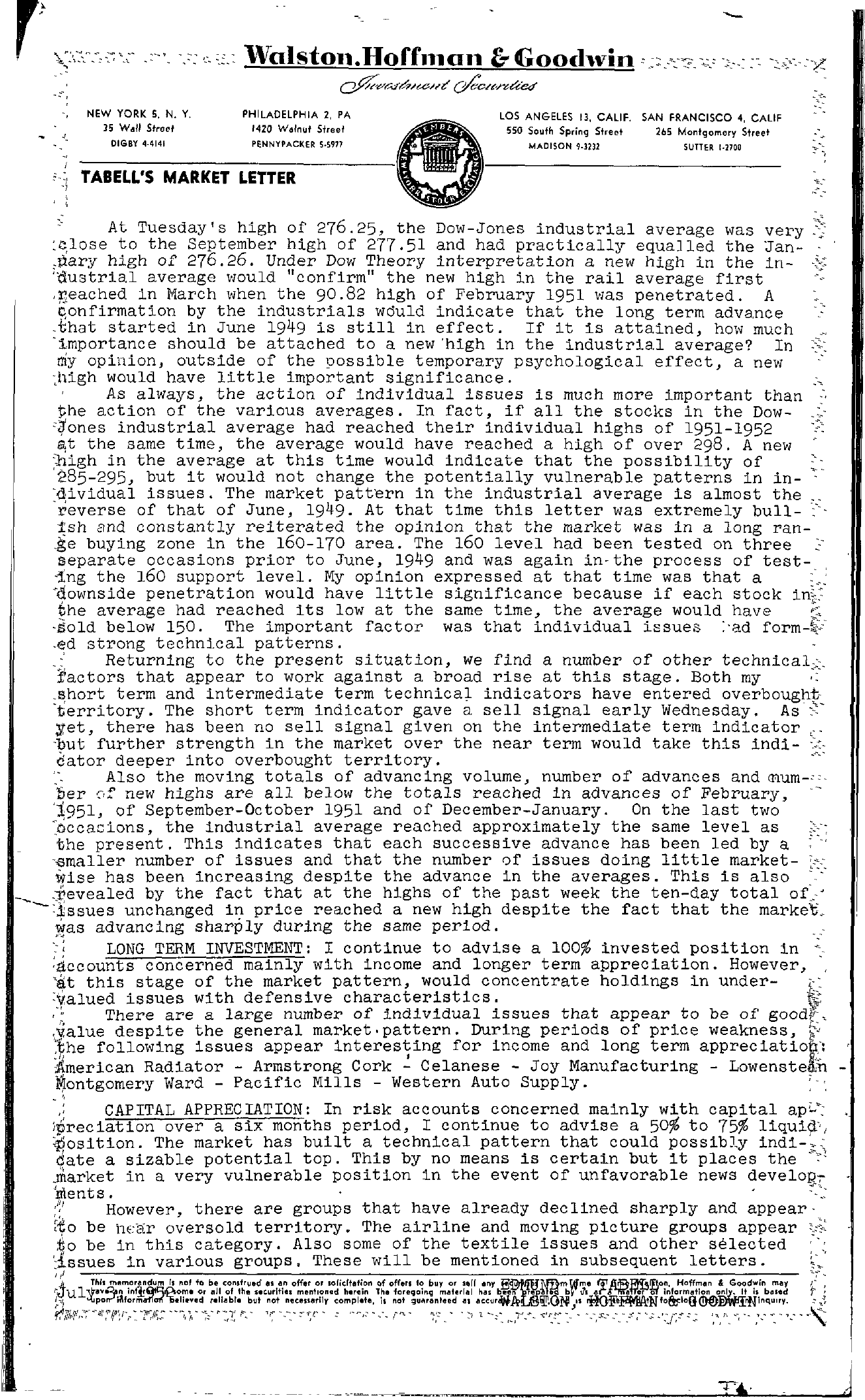 – NEW YORK 5, N, y, PHILADELPHIA 2, PA 15 Wall Street 1420 Walnut Street DIGBY 1-4141 , PENNYPACKER S5917 ,. TABELL'S MARKET LETTER , LOS ANGELES 13, CALIF, 550 South Spring Street MADISON 9232 SAN FRANCISCO 4, CALIF 265 Montgomery Street SUTTER 12700 , At Tuesday I s high of 276,25, the Dow-Jones industrial average was very'' lose to the September high of 277.51 and had practically equalled the an ,uary high of 276.26. Under Dow Theory interpretation a new high in the in- '; '-austrial average would confirm the new high in the rail average first ,eached in March when the 90,82 high of February 1951 was penetrated. A c,onfirmation by the industrials would indicate that the long term advance ,that started in June 1949 is still in effect. If it is attained, how much 'importance should be attached to a new 'high in the industrial average In ';.' my opinion, outside of the ,)ossible temporary psychological effect, a new ;high would have little important significance. As always, the action of individual issues is much more important than the action of the various averages. In fact, if all the stocks in the Dow- , 'qones industrial average had reached their individual highs of 1951-1952 t the same time, the average would have reached a high of over 298. A new bigh in the average at this time would indicate that the possibility of '285-295, but it would not change the potentially vulnerable patterns in in- 'oividual issues. The market patt'ern in the industrial average is almost the 'reverse of that of June, 1949. At that time this letter was extremely bull- l;sh and constantly reiterated the opinion that the market was in a long ran- ,ge buying zone in the 160-170 area. The 160 level had been tested on three separate occasions prior to June, 1949 and was again in,the process of test- 'fng the 160 support level. My opinion expressed at that time was that a ' , , downside penetration would have little significance because if each stock in, the average had reached its low at the same time, the average would have ,told below 150. The important factor was that individual issues 'ad form-' ,ed strong technical patterns. , Returning to the present situation, we find a number of other technicaL factors that appear to work against a broad rise at this stage. Both my ,hort term and intermediate term technical indicators have entered overbough 'territory. The short term indicator gave a sell signal early Wednesday. As yet, there has been no sell signal given on the intermediate term indicator C' 'but further strength in the market over the near term would take this indi- ,, dator deeper into overbought territory. ,,' , Also the moving totals of advancing volume, number of advances and mum-t!, ber f new highs are all below the totals reached in advances of February, ,– '951, of September-October 1951 and of December-January. On the last two occacions, the industrial average reached approximately the same level as ''; the present. This indicates that each successive advance has been led by a –, ',maIler number of issues and that the number of issues doing little market- ,'–wise has been increasing despite the advance in the averages. This is also ' ,evealed by the fact that at the highs of the past week the ten-day total of —j;ssues unchanged in price reached a new high despite the fact that the market was advancing sharply during the same period. -.; –' ' LONG TERM INVESTMENT I continue to advise a 100 invested position in ', iccounts concerned mainly with income and longer term appreciation. However, ' -at this stage of the market pattern, would concentrate holdings in under- alued issues with defensive characteristics. , There are a large number of individual issues that appear to be of goodt, jialue despite the general market. pattern. During periods of price weakness, ' ,the following issues appear interesting for income and long term appreciatiOj merican Radiator – Armstrong Cork Celanese – Joy Manufacturing – Lowensten ontgomery Ward – Pacific Mills – Western Auto Supply. t ', CAPITAL APPRECIATION In risk accounts concerned mainly with capital ap- ipreciation over a six months period, I continue to advise a 50 to 75 liquiS11 ;Position. The market has built a technical pattern that could possibJ,y indi- date a sizable potential top. This by no means is certain but it places the ,market in a very vulnerable position in the event of unfavorable news develoR 'nients. ';' However, there are groups that have already dec lined sharply and appear, fo be i1dr oversold territory. The airline and moving picture groups appear , to be in this category. Also some of the textile issues and other selected '1ssues in various groups. These will be mentioned in subsequent letters. ',' //1 Eml\ffimII This mflmorandum is nol to be construed as an offer or IOfidtalion of offers fo buy or nff any rJult'lvn 1ntlQtqrOsome or aJl of the securities mentioned herein The foregoing materiel has tieen ra ilia Wme fit sn;ewe.fft.on, Hoffman by 1/, t-i'ffiatr'ettI' inlormlltion &IlG..o…o!!dwisinbumeady \!!'.ON'!, po il.formdfcrr'Delieved r.UlIbl. but not necessarily complete, is not gUl'Irllnleed as lIccurJtfh ,IS flONfo&loQ)1!JINl1.rtJ'inqu'ry. '-;', rI 'rft,7!.(','–ijlt!'t 7l- –';, 'Y , F. – ,,, -…- -'C – , – ,', r'o. – – .' ,.;r'.'' – -'-J;!.- 1 — -;- ',',5.' f '. ','-,I'., –; — – – '.' – –''\