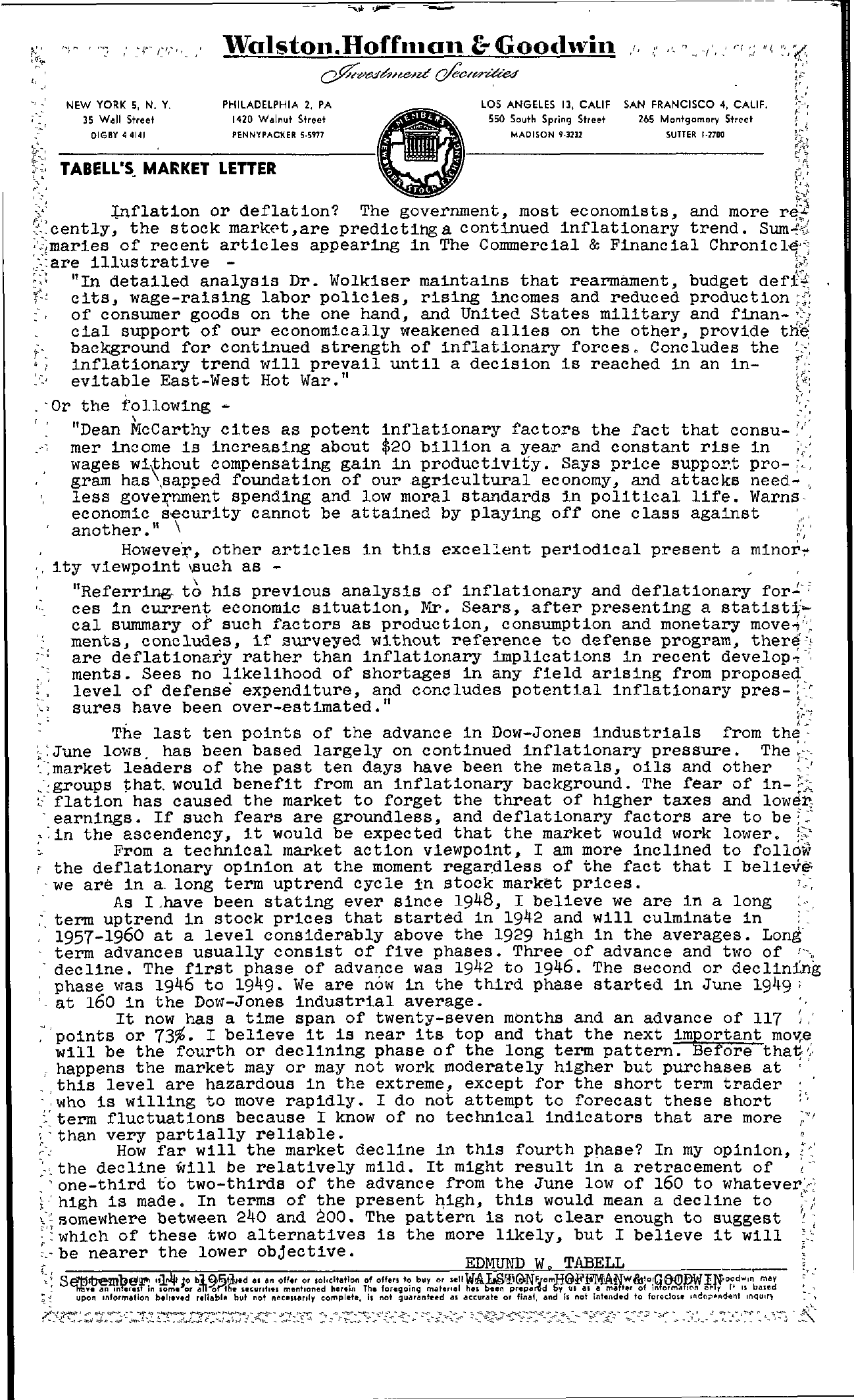 &Wolston.HoUllIon Goodwin f '-, .. '/ . ,' , .I,f!'.,I 9-.,/' ;f (' , NEW YORK 5, N. y, PHILADELPHIA 2, PA 35 Wo/III Street 1420 Walnut Street DIGBY 44141 PENNYPACKER 55911 -, tT TABEll'S. MAItKET lETTER LOS ANGELES 13, CALIF 550 South Spring Street MADISON 9-3232 SAN FRANCISCO 4, CALIF, 265 Montgomery Street SUTTER 12100 1.. ' ' .,I J ' . t'''f '2' I 'I ; f j;nflation or deflation The government, most economists, and more rJ1 'cently, the stock markE't,are predictihga continued inflationary trend. Sum..i;;; -imaries of recent articles appearing in The Commercial & Financial Chronicl-Ej'; ,.care illustrative – );,; ;;; In detailed analysis Dr. Wolkiser maintains that rearmament, budget def f-' cits, wage-raising labor policies, rising incomes and reduced production ;f of consumer goods on the one hand, and United. States military and finan- ,-j cial support of our economically weakened allies on the other, provide th ,- background for continued strength of inflationary forces. Concludes the c-', inflationary trend will prevail until a decision is reached in an in- t;' evitable East-West Hot War. t';, . -Or the following – .', I .-, Dean McCarthy cites as potent inflationary factors the fact that consu- mer income is increasing about 20 billion a yeaI' and constant rise in ,'/ wages Wihout compensating gain in productivity. Says price suppor,t pro- ;. gram has ,sapped foundation of our agricultural economy, and attacks need- less govenment spending and low moral standards in political life. Warns- economiC s,ecurity cannot be attained by playing off one class against another. \I \ ,,,' , Howeve'l, other articles in this excel'ent periodical present a minor ity viewpoint \such as – ,, Referr1.n& t6 his previous analysis of inflationary and deflationary for…(-'- ces in current economic Situation, Mr. Sears, after presenting a statistt- !!tl!ecff;eswitrte ;; ;j' ; are deflationary rather than inflationary implications in recent develop -', ments. Sees no likelihood of shortages in any field arising from proposed- ;,' level of defense expenditure, and concludes potential inflationary pres- ;,- '., sures have been over-estimated. ; . f; The last ten pOints of the advance in Dow-Jones industrials from the- ;, June lows. has been based largely on continued inflationary pressure. The ;-. 'market leaders of the past ten days have been the metals, oils and other groups that. would benefit from an inflationary background. The fear of in- , flation has caused the market to forget the threat of higher taxes and lowEiii – earnings. If such fears are groundless, and deflationary factors are to be' -in the ascendency, it would be expected that the market would work lower. ;- From a technical market action viewpoint, I am more inclined to follow r the deflationary opinion at the moment regardless of the fact that I believe', we are in a. long term uptrend cycle !n stock market prices. ', As I.have been stating ever since 1948, I believe we are in a long term uptrend in stock prices that started in 1942 and will CUlminate in , 1957-1960 at a level considerably above the 1929 high in the averages. Long' . term advances usually consist of five phases. Three of advance and two of '–' decline. The first phase of advance was 1942 to 1946. The second or declining phase was 1946 to 1949. We are now in the third phase started in June 1949' , at 160 in the Dow-Jones industrial average. It now has a time span of twenty-seven mbnths and an advance of 117 points or 73. I believe it is near its top and that the next iml2.ortant mov,.e will be the fourth or declining phase 0 f the long term pattern. Before that, '' .- happens the market mayor may not work moderately higher but purchases at ,this level are hazardous in the extreme, except for the short term trader ,who is willing to move rapidly. I do not attempt to forecast these short '. ' term fluctuations because I know of no technical indicators that are more /' ;than very partially reliable. , How far will the market decline in this fourth phase In my opinion, ; ' -c the decline will be relatively mild. It might result in a retracement of , i', one-third to high is made. t wo-thirds In terms of the advance of the present from high, the June low of this would mean 160 to whatever',–' a decline to ,, , , somewhere between 240 and 200. The pattern is not clear enough to suggest i, '; 'which of these two alternatives is the more likely, but I believe it will ;.- be nearer the lower objective. C — EDMUND W TABELL ' Sdr.hbemheQ'ItJ 111 JO 1IS'Y' o/In interesT in some or anb19ln.tl..d 0/11 an offer or solicitation or'ifa uCllrlhe. menhoned Iter,in Tohf .offfoerresliltooingbuymaotrer,iael IhelnWb!elenlpreNpaFrJidomfi;HeVIFFonMaAlm\rTtewr&o'f oiaoOrmOD(W'I 'Mrt;odI'1' b'ased;- ;,,' upon Information b.heved reliabhl but not nlluuanly complete, is not ;II/arantead as accurate or final, and is not intended to foredon Ifldn;..ndent .nqult ,