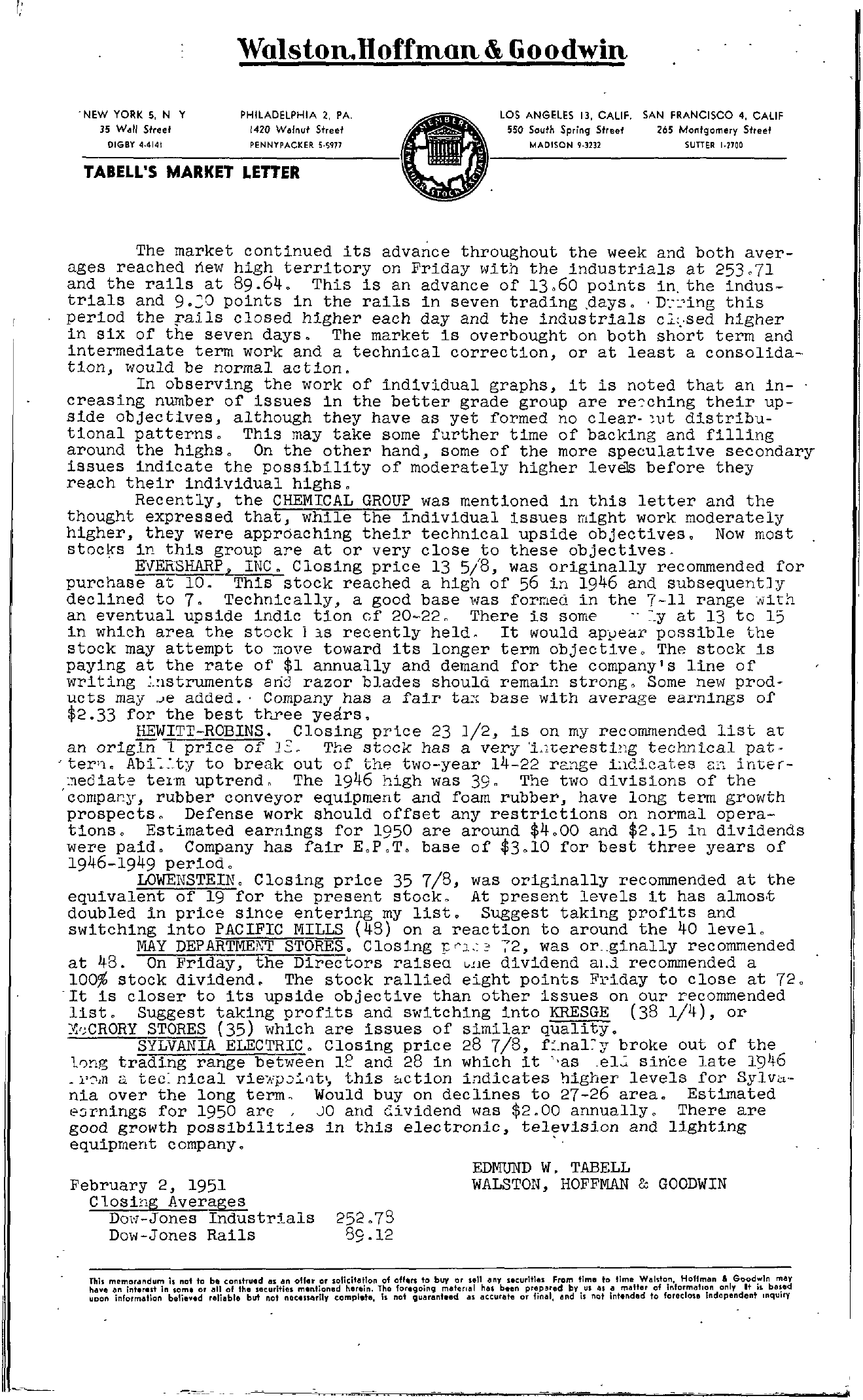 Walston.Hoffman &Goodwin 'NEW YORK S, N Y 35 Wo!ll Street DIGBY 0141011 PHILADELPHIA 2, PA, 1420 Walnut Street PENNYPACKER 5-5977 TABELL'S MARKET LETTER LOS ANGELES 13, CALIF, SAN FRANCISCO 4, CALIF 550 South Spring Street 265 Montgomery Street MADISON 9-3232 SUTTER 12700 The market continued its advance throughout the week and both aver- ages reached new high territory on Friday with the industrials at 253,71 and the rails at 89.64. This is an advance of 13,60 points in, the indus- trials and 9.20 points in the rails in seven trading ,days. 'D''ing this period the rails closed higher each day and the industrials c;'sed higher in six of the seven days. The market is overbought on both short term and intermediate term work and a technical correction, or at least a consolida- tion, would be normal action. In observing the work of individual graphs, it is noted that an in- creasing number of issues in the better grade group are reching their up- side objectives, although they have as yet formed no clear ;,It distribu- tional patterns. This may take some further time of backing and filling around the highs. On the other hand, some of the more speculative secondary issues indicate the possibility of moderately higher leves before they reach their individual highs. Recently, the CHEMICAL GROUP was mentioned in this letter and the thought expressed that, while the individual issues might work moderately higher, they were approaching their technical upside objectives. Now most stocks in this group are at or very close to these objectives. EVERSHARP , INC. Closing price 13 5/8, was originally recommended for purchase at 10. This stock reached a high of 56 in 1946 and subsequentJy declined to 7. Technically, a good base was forraed in the 7-11 range 'liit'! an eventual upside indic tion cf 20-22. There is some .' .y at 13 to 15 in which area the stock i is recently held. It would apyear possible the stock may attempt to uove toward its longer term objective. The stock is paying at the rate of 1 annually and demand for the company's line of writing ;,!lstruments alid razor blades should remain strong. Some new prod- ucts may Je added.' Company has a fair ta;, base with average earnings of' 2.33 for the best tree years. HEWITT-ROBINS. Closing price 23 J/2, is on my recommended list at an origin 1 price of . The stock has a very 'i.lteresti!lg technical pat . . ter'1. Abi.ty to break out of the two-year 14-22 r2.nge ilc,icates c.' inter- 'led iate tel'm uptrend. The 1946 high was 39. The two divisions of the compars, rubber conveyor equipment and foam rubber, have long term growth prospects, Defense work should offset any restrictions on normal opera- tions. Estimated earnings for 1950 are around 4.00 and 2.15 in diVidends were paid. Company has fair E.P.T. base of 3.10 for best three years of 1946-1949 period. LOWENSTEIN. ClOSing price 35 7/8, was originally recommended at the equivalent of 19 for the present stock, At present levels it has almost doubled in price since entering my list. Suggest taking profits and switching into PACIFIC MILLS (43) on a reaction to around the 40 level. MAY DEPARTME)\'T STORES. ClOSing )(',2 -;'2, was orginally recommended at 48. On Friday, the Directors raisea lle dividend aLj recommended a 100 stock dividend. The stock rallied eight pOints Friday to close at 72. 'It is closer to its upside objective than other issues on our recommended list. Suggest taking profits and switching into KRESGE (38 1/4), or Y;'5CRORY STORES (35) which are issues of similar quality. SYLVANIA ELECTRIC. ClOSing price 28 7/8, Lnary broke out of the l0ng trading range between 12 and 28 in which it as ,e1., sin'ee late 1946 .l),n a tec nieal vier.'p,)1t this ;,etion indicates higher levels for Sylva– nia over the long term, Would buy on declines to 27-26 area. Estimated e;rnings for 1950 ar(' , JO and dividend was 2.00 annually. There are good growth possibilities in this electronic, television and lighting equipment company. ' February 2, 1951 Closing Averages DO\'l-Jones Industrials 252.73 Dow-Jones RailS 89.12 EDMUND W. TABELL WALSTON, HOFFMAN & GOODWIN This memordum b not to b. construed illS an olfer or solicitation of ofl.rs to buy or sell any securities From time to time Waldo, Hoffman & Goodln may ha…. an Int.relt in some or all of the securities men.tioned her.in. The foregoing material has been prep3'ed by us as a matter of Information only It based UDon information believed reliabl. but not nQuUllirily c.ompl.te, Is not ljIuaranfeed o!s accurate or final, find is not Intended to forocloSll Indo pendent Inquiry z. 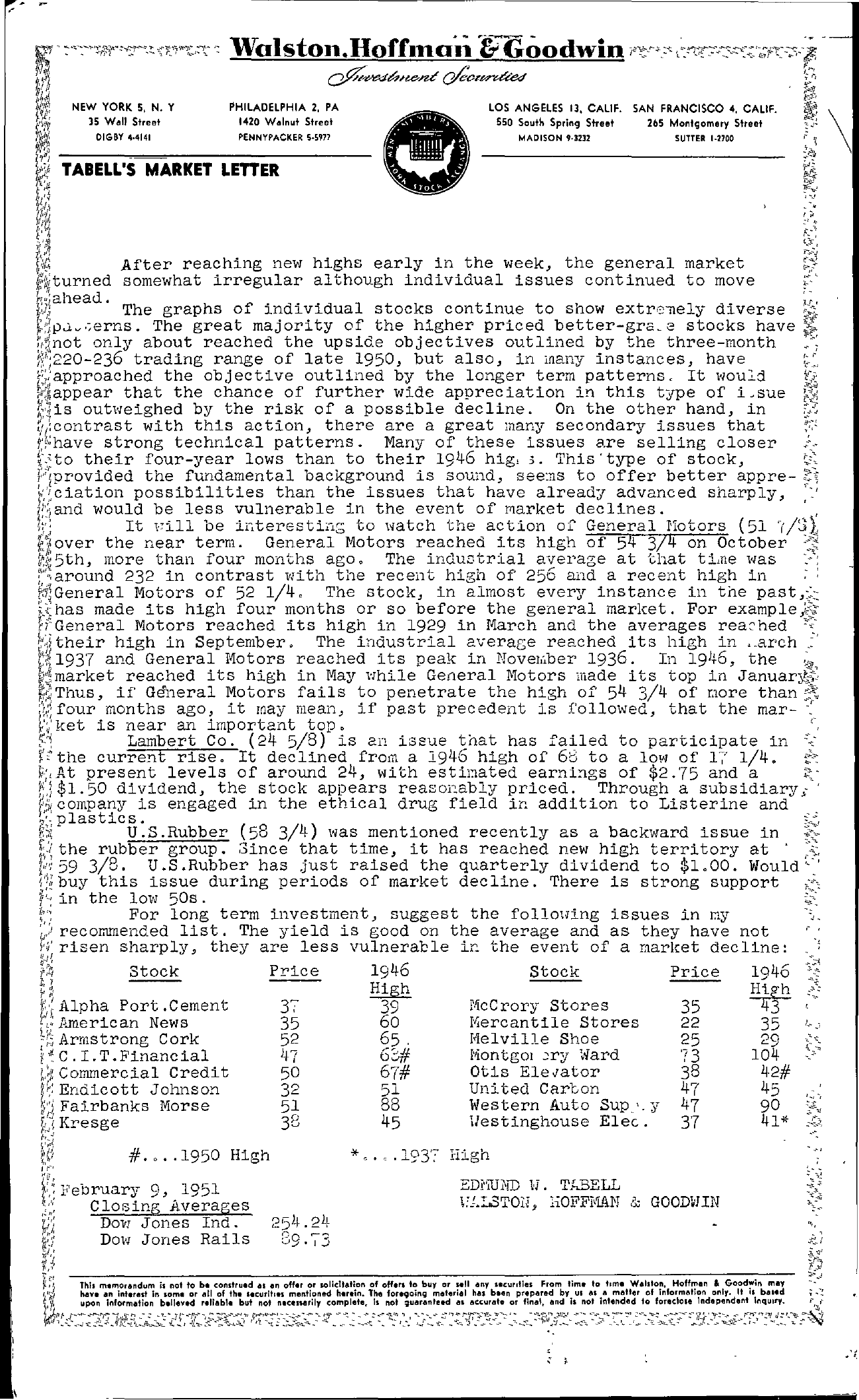 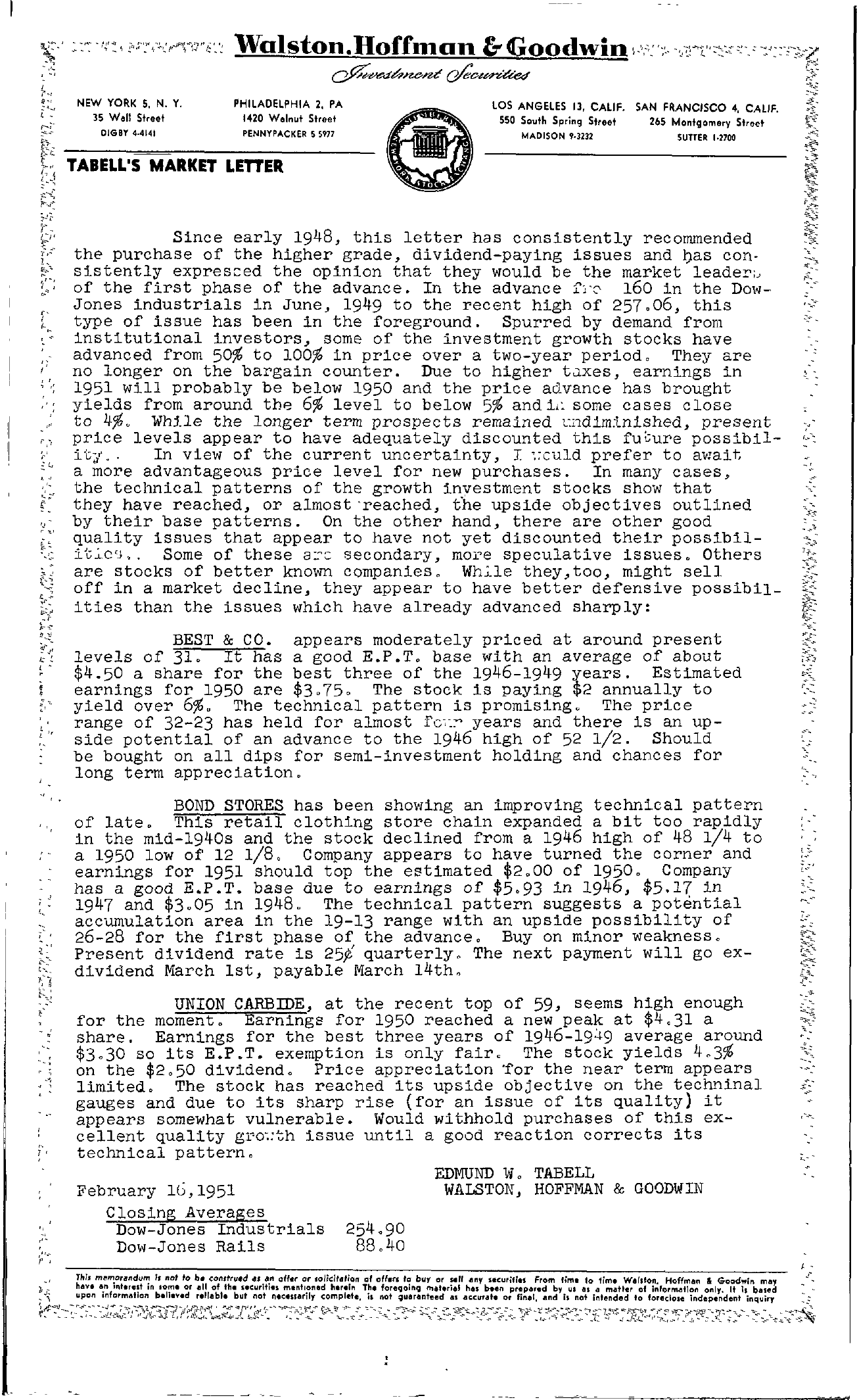 ,'-' – ' t' ,,'' II-'' f'-It,, i; ' ' ,- .'- NEW YORK S, N, Y. 35 WII Street — DIGBY 4-4141 PHILADELPHIA 2, PA 1420 Wolnut Street PENNYPACKER S59n f'-! TABELL'S MARKET LEnER LOS ANGELES 13, CALIF. SAN FRANCISCO 4, CALIF. 550 South Spring Street 265 Montgomery Street MADISON 93232 SUTTER 12700 Since early 1948, this letter has conSistently recommended the purchase of the higher grade, dividend-paying issues and as con- Sistently expres2ed the opinion that they would be the market leader; of the first phase of the advance. In the advance r; 'C' 160 in the Dow- Jones industrials in June, 1949 to the recent high of 257.06, this type of issue has been in the foreground. Spurred by demand from , — institutional investors, some of the investment growth stocks have advanced from 50 to 100 in price over a two-year period. They are f, ,.; no longer on the bargain counter. Due to higher txes, earnings in 1951 will probably be below 1950 and the price advance has brought ,' ' yields from around the 6 level to below 5 and i, some cases close to 4. Whl1e the longer term prospects remained cndimtnished, present t ,-, price levels appear to have adequately discounted this fucure possibil- l'G;, . In view of the current uncertainty, I culd prefer to aViai t a more advantageous price level for new purchases. In many cases, – , the teclmical patterns of the growth investment stocks show that they have reached, or almost 'reached, the upside objectives outlined by their base patterns. On the other hand, there are other good quality issues that appear to have not yet discounted their possibil- itc .. Some of these a secondary, more speculative issues. Others are stocks of better known companies. Whle they,too, might sell off in a market decline, they appear to have better defensive possibil ities than the issues which have already advanced sharply BEST & CO. appears moderately priced at around present levels of 31. It has a good E.P.T. base with an average of about 4.50 a share for the best three of the 1946-1949 years. Estimated . earnings for 1950 are 3.75. The stock is paying 2 annually to -, , yield over 6. The technical pattern is promising. The price range of 32-23 has held for almost fc,', years and there is an up- side potential of an advance to the 1946 high of 52 1/2. Should be bought on all dips for semi-investment holding and chances for long term appreciation. , BOND STORES has been showing an improving technical pattern of late. This retail clothing store chain expanded a bit too rapidly in the mid-1940s and the stock declined from a 1946 high of 48 1;4 to a 1950 low of 12 1/8. Company appears to have turned the corner and earnings for 1951 should top the estimated 2.00 of 1950. Company has a good E.P.T. base due to earnings of 5.93 in 1946, 5.17 in 1947 and 3.05 in 1948. The technical pattern suggests a potential accumulation area in the 19-13 range with an upside possibility of , ' 26-28 for the first phase of the advance. Buy on minor weakness. Present dividend rate is 251 quarterly. The next payment will go ex- dividend March 1st, payable March 14th. ,, UNION CARBIDE, at the recent top of 59, seems high enough for the moment. Earnings for 1950 reached a new peak at 4,31 a share. Earnings for the best three years of 1946-199 average around 3.30 so its E.P.T. exemption is only fair, The stock yields 4.3 ., ; ,, on the 2.50 dividend. Price appreciation or the near term appears limited. The stock has reached its upside objective on the techninal gauges and due to its sharp rise (for an issue of its quality) it appears somewhat vulnerable. Would withhold purchases of this ex- ,' cellent quality gro;th issue until a good reaction corrects its technical pattern. February IG,1951 EDMUND W. TABELL WALSTON, HOFFMAN & GOODWIN I— Closing Averages Dow-Jones Industrials ,– Dow-Jones Rails I' , I This mllfflOroJdum if not to b. COt!Jtru.d af an off.r or ,olicltation of oU.rs to buy or HII oIInV sicurifil' From fime fo timl Waldon Hoffman Goodwin may 11.! haVI a.n intlre!t in loml or all of th Ilcuritiis mlntlned brei!'! Th foreC)oinC) aterial has been prepared by UI as e metter of i'ormation only. It 1 baled ; upon Information b.lllved rillabil but not necessarily complete, b not ;uaranteed as accuratl 0' 'inal, and h not Intended to foreclose independent inquiry -5\'7–,;,'tiJ.1 !f'Jt,\;, '1!.'– –..5''—!;- -'- -)—–,- '' ';tj ''1-' 'f,-1!-r – '-!;;; 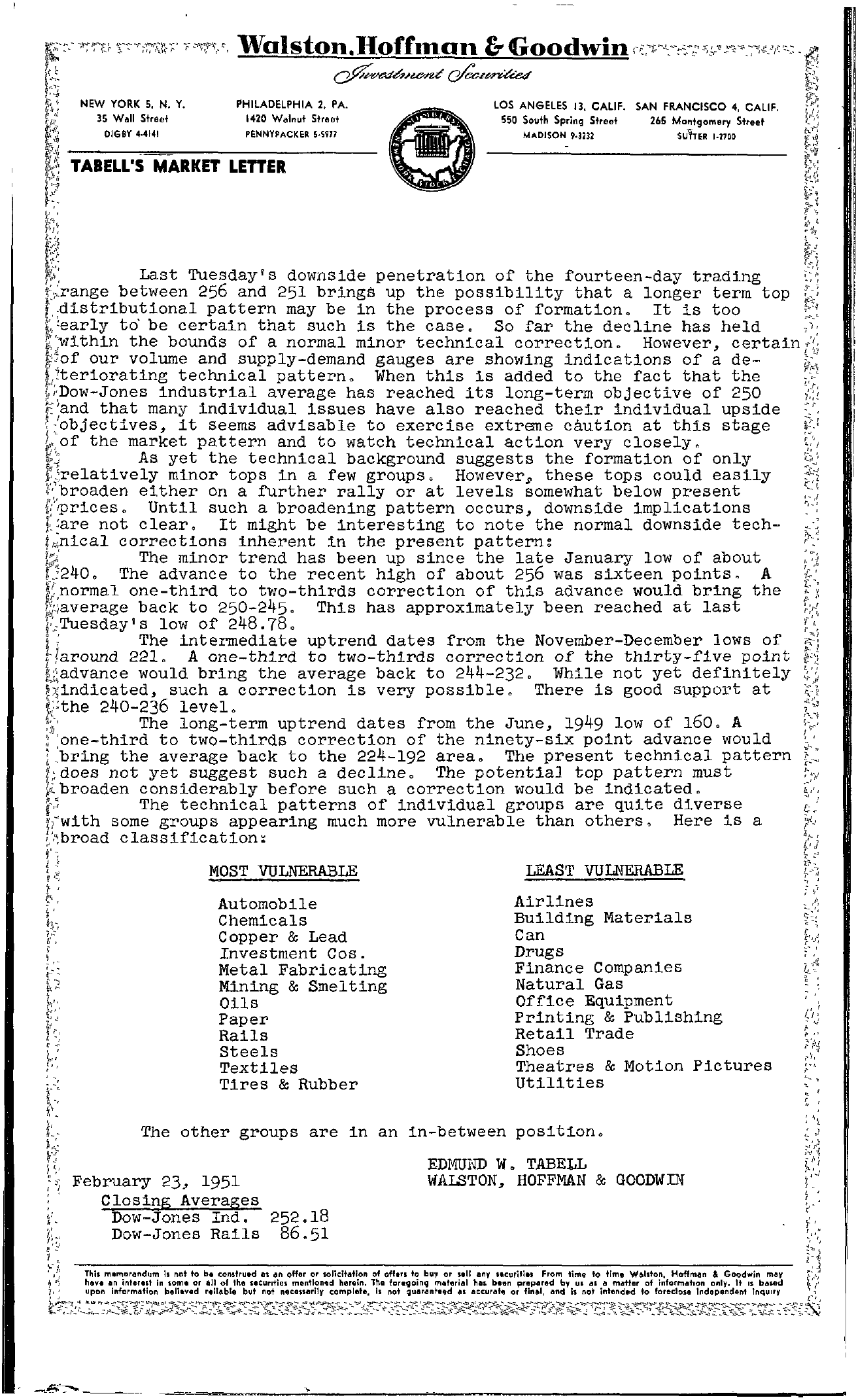