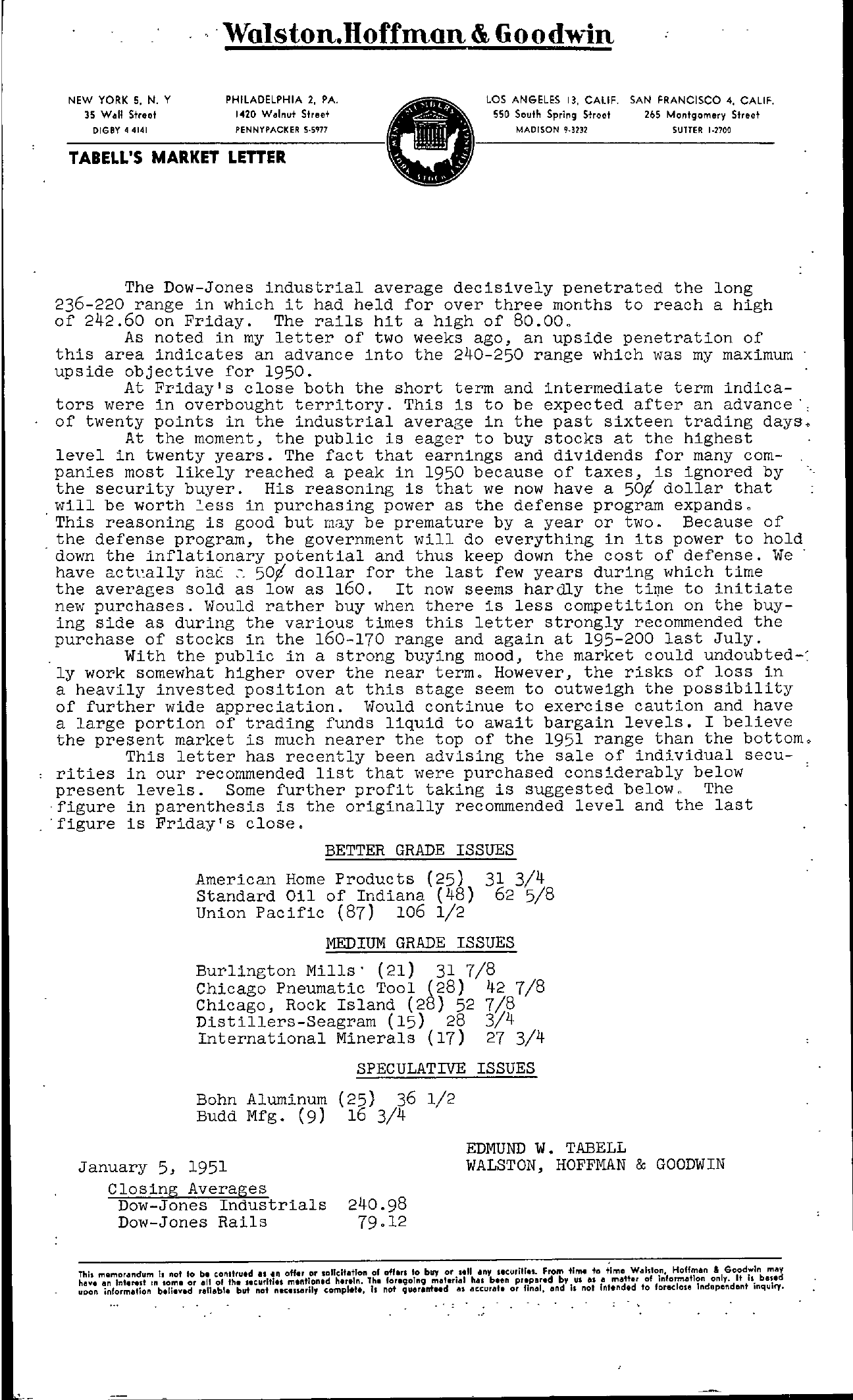 … 'Walston.Hoffman &, Goodwin NEW YORK 5. N. Y 35 Wall Streot DIGBY 44141 PHILADELPHIA 2. PA. 1420 Walnut Street PENNYPACKER ss'm TABELL'S MARKET LEnER LOS ANGELES Il. CALIF. 550 South Spring StrOl!t MADISON 93232 SAN FRANCISCO 4, CALIF. 265 Montgomery Street SUTTER 12700 The Dow-Jones industrial average decisively penetrated the long 236-220 range in which it had held for over three months to reach a high of 242.60 on Friday. The rails hit a high of 80.000 As noted in my letter of two weeks ago, an upside penetration of this area indicates an advance into the 240-250 range which was my maximum upside objective for 1950. At Friday's close both the short term and intermediate term indica- tors were in overbought territory. This is to be expected after an advance', of twenty points in the industrial average in the past sixteen trading days. At the moment, the public is eager to buy stocks at the highest level in twenty years. The fact that earnings and dividends for many companies most likely reached a peak in 1950 because of taxes, is ignored by the security buyer. His reasoning is that we now have a 501 dollar that . will be worth ess in purchasing power as the defense program expands This reasoning is good but may be premature by a year or two. Because of . the defense program, the government will do everything in its power to hold down the inflationary potential and thus keep down the cost of defense. We have actcally hac ,'. 501 dollar for the last few years during which time the averages sold as low as 160. It now seems hardly the tiI)le to initiate new purchases. Would rather buy when there is less competition on the buying side as during the various times this letter strongly recommended the purchase of stocks in the 160-170 range and again at 195-200 last July. With the public in a strong buying mood, the market could undoubted- ly work somewhat higher over the near term However, the risks of loss in a heavily invested position at this stage seem to outweigh the possibility of further wide appreciation. Would continue to exercise caution and have a large portion of trading funds liquid to await bargain levels. I believe the present market is much nearer the top of the 1951 range than the bottom, This letter has recently been advising the sale of individual securities in our recommended list that were purchased considerably below present levels. Some further profit taking is suggested belowo The figure in parenthesis is the originally recommended level and the last 'figure is Friday'S close. BETTER GRADE ISSUES American Home Products (25) 31 3/4 Standard Oil of Indiana (48) 62 5/8 Union Pacific (87) 106 1/2 MEDIUM GRADE ISSUES Burlington I'lills' (21) 31 7/8 Chicago Pneumatic Tool (28) 42 7/8 Chicago, Rock Island (28) 52 7/8 Distillers-Seagram (15) 28 3/4 International Minerals (17) 27 3/4 SPECULATIVE ISSUES Bohn Aluminum (25) 36 1/2 Budd Mfg. (9) 16 3/4 January 5, 1951 ClOSing Averages Dow-Jones Industrials Dow-Jones Rails 240.98 79.12 EDMUND W. TABELL WALSTON, HOFFMAN & GOODWIN Thil memorandum II not to b. constru.d at u off.r or lolIcltation of off.rs to bllJ' or 11 any curlll. From tIm. to time Waldon, Hoffman & Goodwin may hll …. an Int.,.. In 10m. or all 01 the curltl mentioned h.reln. Thl fOI'901n9 mallrial has bien prlpar.d by UI a. a mattlr of informatIon only. It h. blls.d uoon informaflon b.II…..d rellebl. bllf not nlc.narlly compl.t., II not 9ullr.m..d as accurat. or final, and II not Int.nded to foreclose Indo pendent Inquiry.