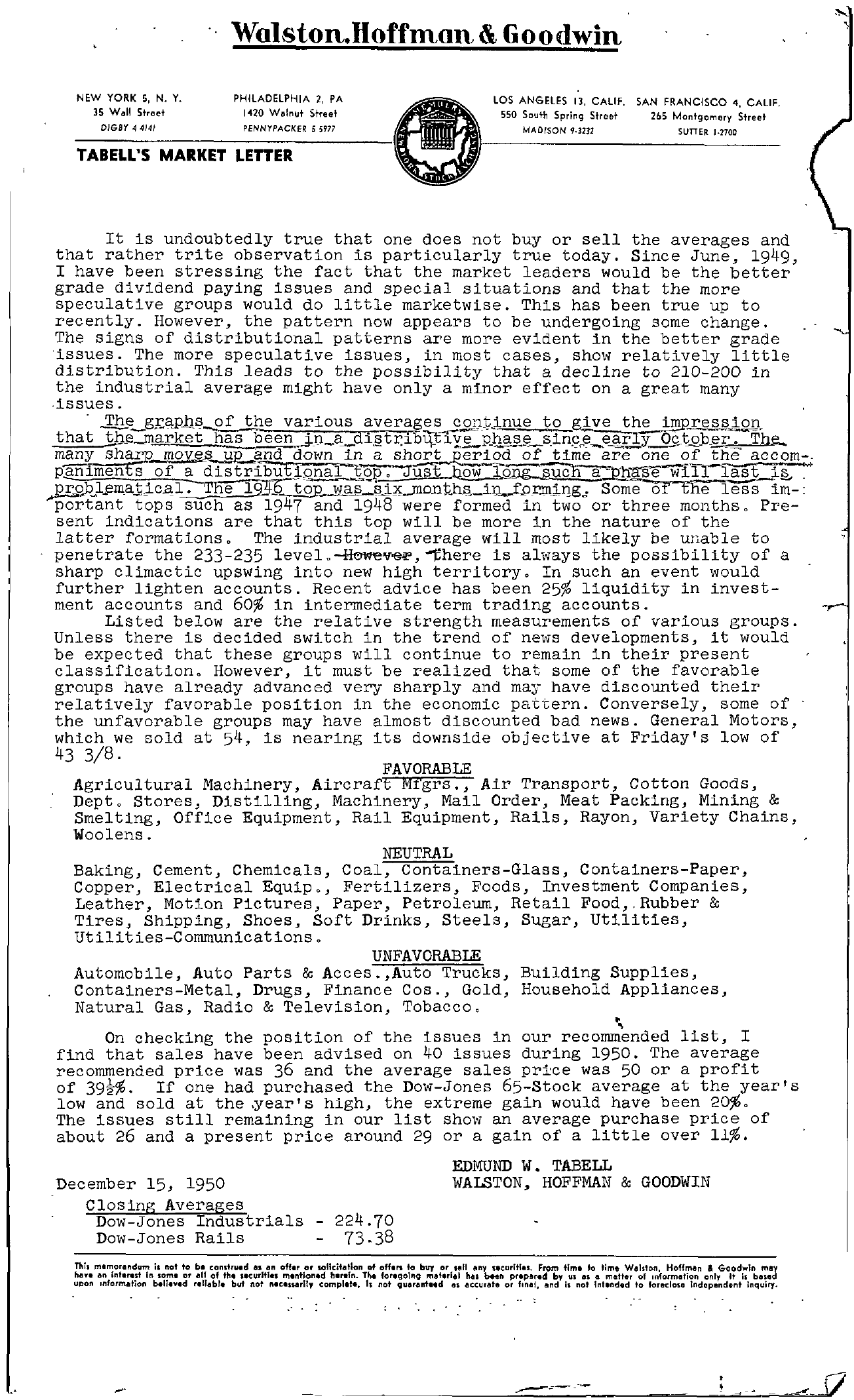 Wolston.Hoffmon &Goodwin NEW YORK 5, N. Y. 35 Wall Street DJGBY -4414/ PHILADELPHIA 2, PA 1420 Walnut Street PENNYPACKER 55i'77 TABELL'S MARKET LEnER LOS ANGELES I J, CALIF. 550 South Spring Street MADfSON 9321 SAN FRANCISCO 4, CALIF. 2b5 Montgomery Street SUnER 11700 It is undoubtedly true that one does not buy or sell the averages and that rather trite observation is particularly true today. Since June, 1949, I have been stressing the fact that the market leaders would be the better grade dividend paying issues and special situations and that the more speculative groups would do little marketwise. This has been true up to recently. However, the pattern now appears to be undergoing some change. The signs of distributional patterns are more evident in the better grade issues. The more speculative issues, in most cases, show relatively little distribution. This leads to the possibility that a decline to 210-200 in the industrial average might have only a minor effect on a great many issues . . J'hgr.cmhElof the various averags-.S'Dtinue to give the i'!!!pressio l1. tha t lli.e.Jllarket has been inadi.tribu;l.ypJlas.5Ls.inreerJ OC)'.Qp.er. The.. many shap' moves up aBd down in a ,o2er!Od of time are one of the accom- p.gnlments of a distribuH9.!lQQP. ustbow fODg-.Uch-athcrseWln-I…LJ.., ' lJmaJ;Jcl.-TFie 191iP tOP.1'LClJ-si…J1lonths.ilJ…f!JI!JIJ.j,l1g Some of the less im- portant tops such as 1947 and 1948 were formed in two or three months. Present indications are that this top will be more in the nature of the latter formations. The industrial average will most likely be ullable to penetrate the 233-235 leveL HoweV'eil, 'there is always the possibility of a sharp climactic upswing into new high territory. In such an event would further lighten accounts. Recent advice has been 25 liquidity in investment accounts and 60 in intermediate term trading accounts. Listed below are the relative strength measurements of various groups. Unless there is decided switch in the trend of news developments, it would be expected that these groups will continue to remain in their present classification. However, it must be realized that some of the favorable groups have already advanced very sharply and may have discounted their relatively favorable position in the economic pattern. Conversely, some of . the unfavorable groups may have almost discounted bad news. General Motors, which we sold at 54, is nearing its downside objective at Friday1s low of 43 3/8. FAVORABLE Agricultural Machinery, Aircraft JIll'grs., Air Transport, Cotton Goods, Dept. Stores, Distilling, Machinery, Mail Order, Meat Packing, Mining & Smelting, Office Equipment, Rail Equipment, Rails, Rayon, Variety Chains, Woolens. NEUTRAL Baking, Cement, Chemicals, Coal, Containers-Glass, Containers-Paper, Copper, Electrical Equip., Fertilizers, Foods, Investment Companies, Leather, Motion Pictures, Paper, Petroleum, Retail Food,.Rubber & Tires, Shipping, Shoes, Soft Drinks, Steels, Sugar, Utilities, Utilities-Communications. UNFAVORABLE Automobile, Auto Parts & Acces.,Auto Trucks, Building Supplies, Containers-Metal, Drugs, Finance Cos., Gold, Household Appliances, Natural Gas, Radio & Television, Tobacco. \ On checking the position of the issues in our recommended list, I find that sales have been advised on 40 issues during 1950. The average recommended price was 36 and the average sales price was 50 or a profit of 39t. If one had purchased the Dow-Jones 65-Stock average at the year's low and sold at the ,year's high, the extreme gain would have been 20. The issues still remaining in our list show an average purchase price of about 26 and a present price around 29 or a gain of a little over 11. December 15, 1950 CloSing Averages DOW-Jones Industrials – 224.70 DOW-Jones Rails 7338 EDMUND W. TABELL WALSTON, HOFFMAN & GOODWIN Thh mlmorandum is not to bl construed a. an offer or IOlIcit.tlon of offert to buy or .ell .ny securities. From time to time Waldon, Hoffm.n & Goodwin may hUI an 'ntlrest in .ome 0' lilt of the securltie. mentioned he,.in. The foregoin9 matlrial haa been prepued by us al a matter of Information only It is based uoon .nform.tion believed reliable but ftot eulSIIrlly complete, h not 9uar.ntled as accurate or flnat, .nd II not Infended to foredo, Independont Inquiry. .' . JJ.