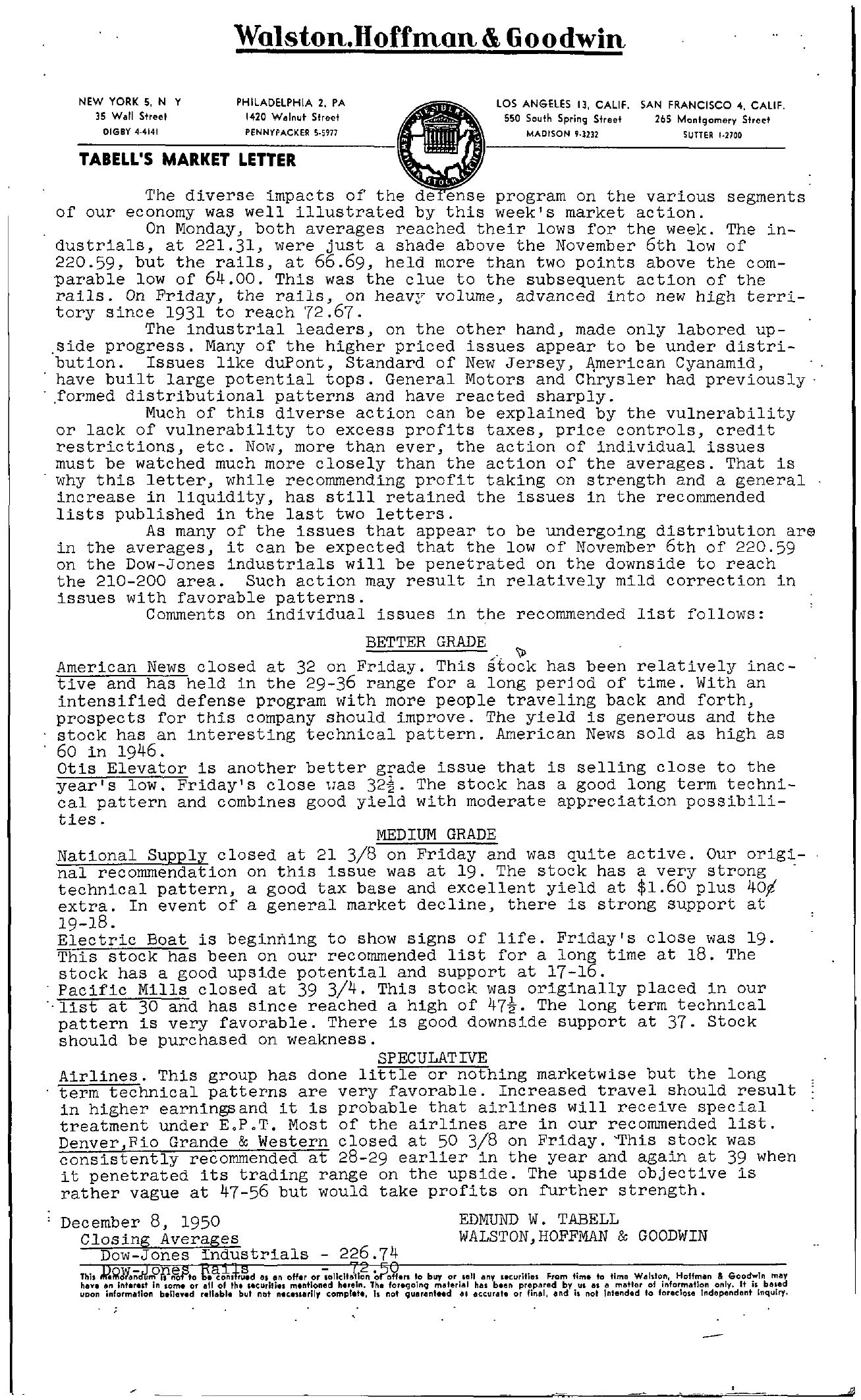 Walston.Hoffman (\ Goodwin NEW YORK 5, N Y 35 Wall Street DIGBY 4-4141 PHILADELPHIA 2, PA 1420 Walnut Street PENNYPACKER 5-5971 TABELL'S MARKET LEnER LOS ANGELES 13, CALIF, 550 South Spring Street MADISON '1232 SAN FRANCISCO 4, CALIF, 2bS Montgomery Sheet SUTTER 12700 The diverse impacts of the de se program on the various segments of our economy was well illustrated by this week's market action. On Monday, both averages reached their lows for the week. The industrials, at 221.31, were just a shade above the November 6th low of 220.59, but the rails, at 66.69, held more than two points above the comparable low of 64.00. This was the clue to the subsequent action of the rails. On Friday, the rails, on heav' volume, advanced into new high territory since 1931 to reach 72.67. The industrial leaders, on the other hand, made only labored up.side progress. Many of the higher priced issues appear to be under distribution. Issues like duPont, Standard of New Jersey, American Cyanamid, have built large potential tops. General Motors and Chrysler had previously ..formed distributional patterns and have reacted sharply. Much of this diverse action can be explained by the vulnerability or lack of vulnerability to excess profits taxes, price controls, credit restrictions, etc. Now, more than ever, the action of individual issues must be watched much more closely than the action of the averages. That is why this letter, while recommending profit taking on strength and a general increase in liquidity, has still retained the issues in the recommended lists published in the last two letters. As many of the issues that appear to be undergoing distribution are in the averages, it can be expected that the low of November 6th of 220.59 on the Dow-Jones industrials will be penetrated on the downside to reach the 210-200 area. Such action may result in relatively mild correction in issues with favorable patterns. Comments on individual issues in the recommended list follows BETTER GRADE / 'ii American News closed at 32 on Friday. This stock has been relatively inac- tive and has held in the 29-36 range for a long perjod of time. With an intensified defense program with more people traveling back and forth, prospects for this company should improve. The yield is generous and the stock has an interesting technical pattern. American News sold as high as 60 in 1946. Otis Elevator is another better grade issue that is selling close to the year's low. Friday's close lias 32. The stock has a good long term techni- cal pattern and combines good yield with moderate appreciation possibili- ties. MEDIUM GRADE National Supply closed at 21 3/8 on Friday and was quite active. Our origi- nal recommendation on this issue was at 19. The stock has a very strong . technical pattern, a good tax base and excellent yield at 1.60 plus 401 extra. In event of a general market decline, there is strong support at 19-18. Electric Boat is beginning to show signs of life. Friday'S close was 19. This stock has been on our recommended list for a long time at 18. The stock has a good upside potential and support at 17-16. Pacific Mills closed at 39 3/4. This stock was originally placed in our list at 30 and has since reached a high of 47. The long term technical pattern is very favorable. There is good downside support at 37. Stock should be purchased on weakness. SPECULATIVE Airlines. This group has done little or nothing marketwise but the long term technical patterns are very favorable. Increased travel should result in higher earnings and it is probable that airlines will receive special treatment under EoPoT. Most of the airlines are in our recommended list. Denver,Fio Grande & Western closed at 50 3/8 on Friday. 'This stock was consistently recommended at 28-29 earlier in the year and again at 39 when it penetrated its trading range on the upSide. The upside objective is rather vague at 47-56 but would take profits on further strength. December 8, 1950 Closing Averages Dow-Jones Industrials – 226.74 EDMUND W. TABELL WALSTON, HOFFMAN & GOODWIN This .Q)fIa; r. to coni rued e. an offer or ;'ol1c1tatlon off…. to buy or 11111 IInv I.curitle. From tim. to tlma Waldon, Hoffman & Goodwin mlly hay, lin Int.red In lome or lit! of the s.curlti mlntloned hr'!' The lor.gol9 malerial has been prepared by UI III II metter of information only, It is baled UDon 'nformatlon believed r,lIebl, but not necearlly complete, II not qUllrollnfeed llf accurate or final, and i, not Intended to foredOe Independont InquIry, –