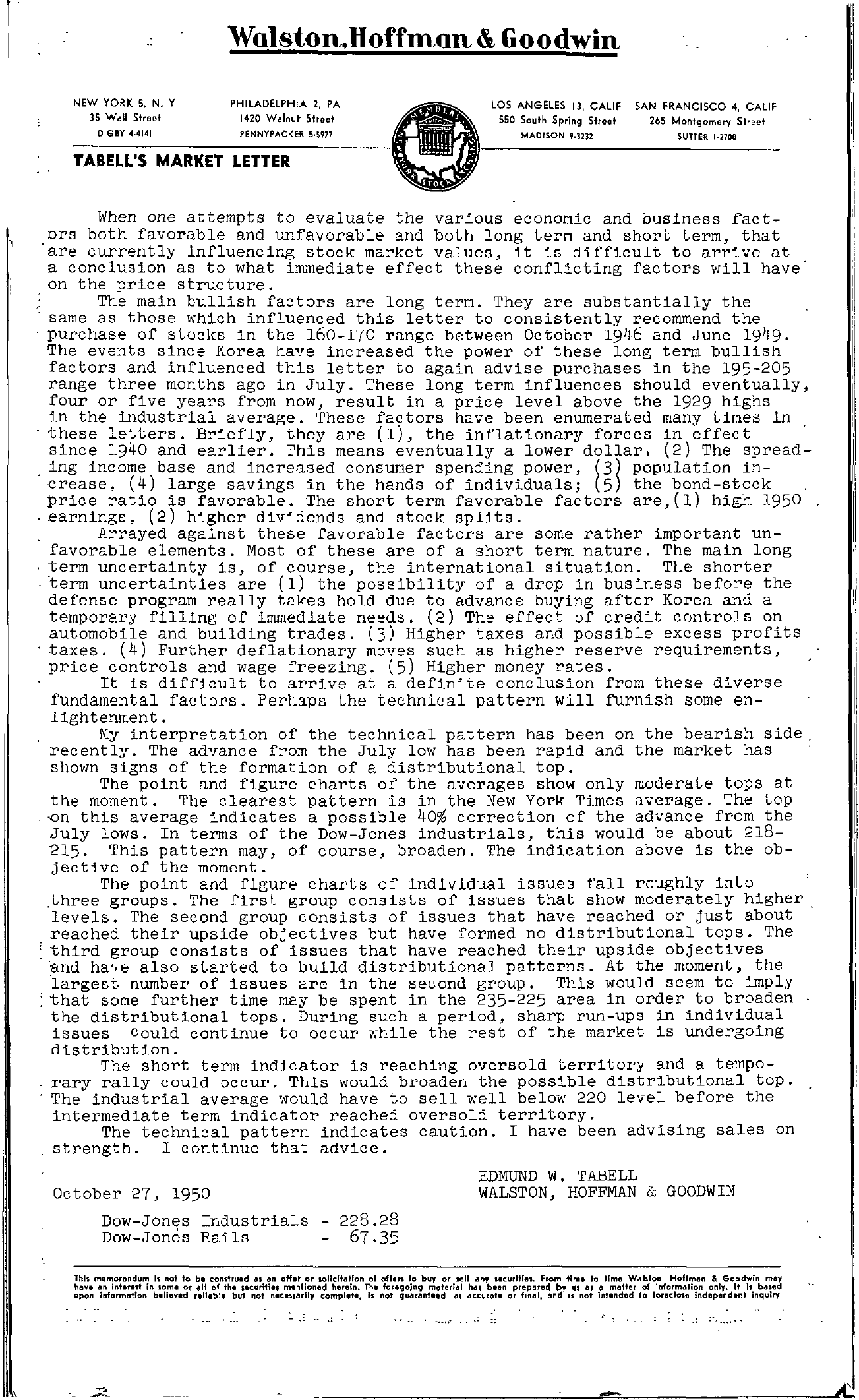 ! Walston.Hoffman &, Goodwin I NEW YORK 5, N, Y 3S Wall Streof DIGBY 4-4141 PHILADELPHIA 2, PA 1420 Wo!!Ilnut Street PENNYPACKER 5S977 TABELL'S MARKET LETTER LOS ANGELES 13, CALIF 550 South Spring Street MADISON '32)2 SAN FRANCISCO 4, CALIF 265 Montgomery Street SUTTER 11700 When one attempts to evaluate the various economic and business fact- .ors both favorable and unfavorable and both long term and short term, that are currently influencing stock market values, it is difficult to arrive at a conclusion as to what immediate effect these conflicting factors will have on the price structure. c The main bullish factors are long term. They are substantially the same as those which influenced this letter to conSistently recommend the purchase of stocks in the 160-170 range between October 1946 and June 1949. The events since Korea have increased the power of these long term bullish factors and influenced this letter to again advise purchases in the 195-205 range three mor.ths ago in July. These long term influences should eventually, four or five years from now, result in a price level above the 1929 highs , in the industrial average. These factors have been enumerated many times in these letters. Briefly, they are (1), the inflationary forces in effect since 1940 and earlier. This means eventually a lower dollar. (2) The spread- lng income base and incresed consumer spending power, (3) population in- crease, (4) large savings in the hands of individuals; (5) the bond-stock . price ratio is favorable. The short term favorable factors are,(l) high 1950 earnings, (2) higher dividends and stock splits. Arrayed against these favorable factors are some rather important un- favorable elements. Most of these are of a short term nature. The main long term uncertainty is, of course, the international situation. TLe shorter term uncertainties are (1) the possibility of a drop in business before the defense program really takes hold due to advance buying after Korea and a temporary filling of immediate needs. (2) The effect of credit controls on automobile and building trades. (3) Higher taxes and possible excess profits taxes. (4) Further deflationary moves such as higher reserve reqUirements, price controls and wage freezing. (5) Higher money rates. It is difficult to arrive at a definite conclusion from these diverse fundamental factors. Perhaps the technical pattern will furnish some en- lightenment. My interpretation of the technical pattern has been on the bearish side. recently. The advance from the July low has been rapid and the market has . shown signs of the formation of a distributional top. The point and figure charts of the averages show only moderate tops at the moment. The clearest pattern is in the New York Times average. The top ,n this average indicates a possible 40 correction of the advance from the July lows. In terms of the Dow-Jones industrials, this would be about 218215. This pattern may, of course, broaden. The indication above is the ob- jective of the moment. The point and figure charts of individual issues fall roughly into .three groups. The first group consists of issues that show moderately higher. levels. The second group consists of issues that have reached or just about reached their upside objectives but have formed no distributional tops. The ; third group consists of issues that have reached their upside objectives 'and ha'Te also started to build distributional patterns. At the moment, the 'largest number of issues are in the second group. This would seem to imply that some further time may be spent in the 235-225 area in order to broaden the distributional tops. During such a period, sharp run-ups in individual issues could continue to occur while the rest of the market is undergoing distribution. The short term indicator is reaching oversold territory and a tempo- rary rally could occur. This would broaden the possible distributional top. The industrial average would have to sell well below 220 level before the intermediate term indicator reached oversold territory. The technical pattern indicates caution. I have been advising sales on strength. I continue that advice. October 27, 1950 EDMUND W. T ABELL WALSTON, HOFFMAN & GOODWIN Dow-Jones Industrials – 228.28 Dow-Jones Rails 67.35 This momotllndum II not to b. construed o. on offer 0,. lollcitatlon of off.,., to buy or lell any ,ecurltles. From tim. to time Walston, Hoffman & GoodwIn may ha. an Int.rest in lome Of all of the SflcurI1i mentioned herein. The for.qojng mClterial has been prepared by UI ,fI, .. m,atter of information only. It is b,ned upon Information believed reliable but not necenar!!, complete, is not Quarante.d as acct,lrate or IInlll, and IS not intended to foredose Independent inqt,liry –. …. , –