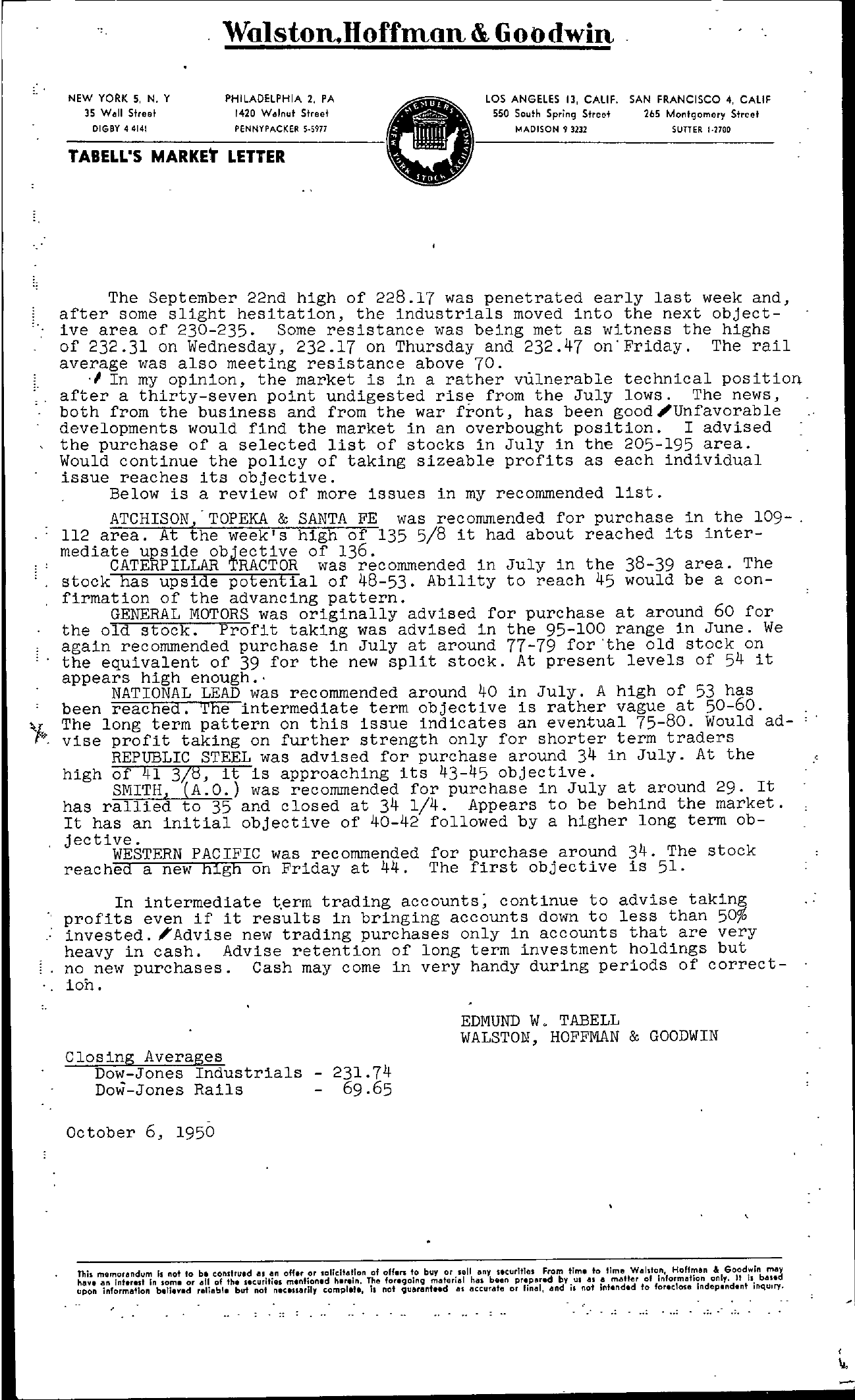 , Walston.Hoffman &, Goodwin NEW YORK 5, N, Y 35 WlIli Street DIGBY 44141 PHILADELPHIA 2, PA 1420 Walnut Street PENNYPACKER 55977 TABELL'S MARKET LETTER LOS ANGELES 13, CALIF, 550 South Spring Street MADISON 9322 SAN FRANCISCO 4, CALIF 265 Montgomery Street SUTTER 12100 The September 22nd high of 228.17 was penetrated early last week and, after some slight hesitation, the industrials moved into the next objective area of 230-235. Some resistance was being met as witness the highs of 232.31 on Wednesday, 232.17 on Thursday and 232.47 on'Friday. The rail average was also meeting resistance above 70. In my opinion, the market is in a rather vulnerable technical position after a thirty-seven point undigested rise from the July lows. The news, both from the business and from the war front, has been goodUnfavorable developments would find the market in an overbought position. I advised the purchase of a selected list of stocks in July in the 205-195 area. Would continue the policy of taking sizeable profits as each individual issue reaches its objective. Below is a review of more issues in my recommended list. ATCHISON,TOPEKA & SANTA FE was recommended for purchase in the 109- 112 area. At the week's high of 135 5/8 it had about reached its intermediate upside objective of 136. CATERPILLAR TRACTOR was recommended in July in the 38-39 area. The stock has upside potential of 48-53. Ability to reach 45 would be a confirmation of the advancing pattern. GENERAL MOTORS was originally advised for purchase at around 60 for the old stock. Profit taking was advised in the 95-100 range in June. We again recommended purchase in July at around 77-79 for 'the old stock on the equivalent of 39 for the new split stock. At present levels of 54 it appears high enough., NATIONAL LEAD was recommended around 40 in July. A high of 53 has been reached. The intermediate term objective is rather vague at 50-60. The long term pattern on this issue indicates an eventual 75-80. Would advise profit taking on further strength only for shorter term traders REPUBLIC STEEL was advised for purchase around 34 in July. At the high of 41 3/8, it is approaching its 43-45 objective. SMITH, (A.O.) was recommended for purchase in July at around 29. It has rallied to 35 and closed at 34 1/4. Appears to be behind the market. It has an initial objective of 40-42 followed by a higher long term ob- jective. WESTERN PACIFIC was recommended for purchase around 34. The stock reached a new high on Friday at 44. The first objective is 51. In intermediate t.erm trading accounts; continue to advise taking profits even if it results in bringing accounts down to less than 50 invested. 'Advise new trading purchases only in accounts that are very heavy in cash. Advise retention of long term investment holdings but , ' no new purchases. Cash may come in very handy during periods of correct- ion. Closing Averages Dow-Jones Industrials Dow-Jones Rails 231. 74 69.65 EDMUND Wo TABELL WALSTON, HOFFMAN & GOODWIN October 6, 1950 Thb memorandum Is not to b. eonstrued III .an offer or lollclt.,tton of off.n to buy or .ell MY Slcur!tl(Js From tim. to time Waldon, Hoffman & Goodwin may hay. an Int.r.st In some or all of the securities mentioned herein, The forlgoing material hal been prlp('Ir.d by 1,11 as .II m.attef of information only. It ii, bas.d upon Information beHind reliable blrf not nlcluarlly c;omplet., Is not qu,antHd at accurate or final, and i not Intln-dld to forlciOte Indep.ndent InquIry. ,