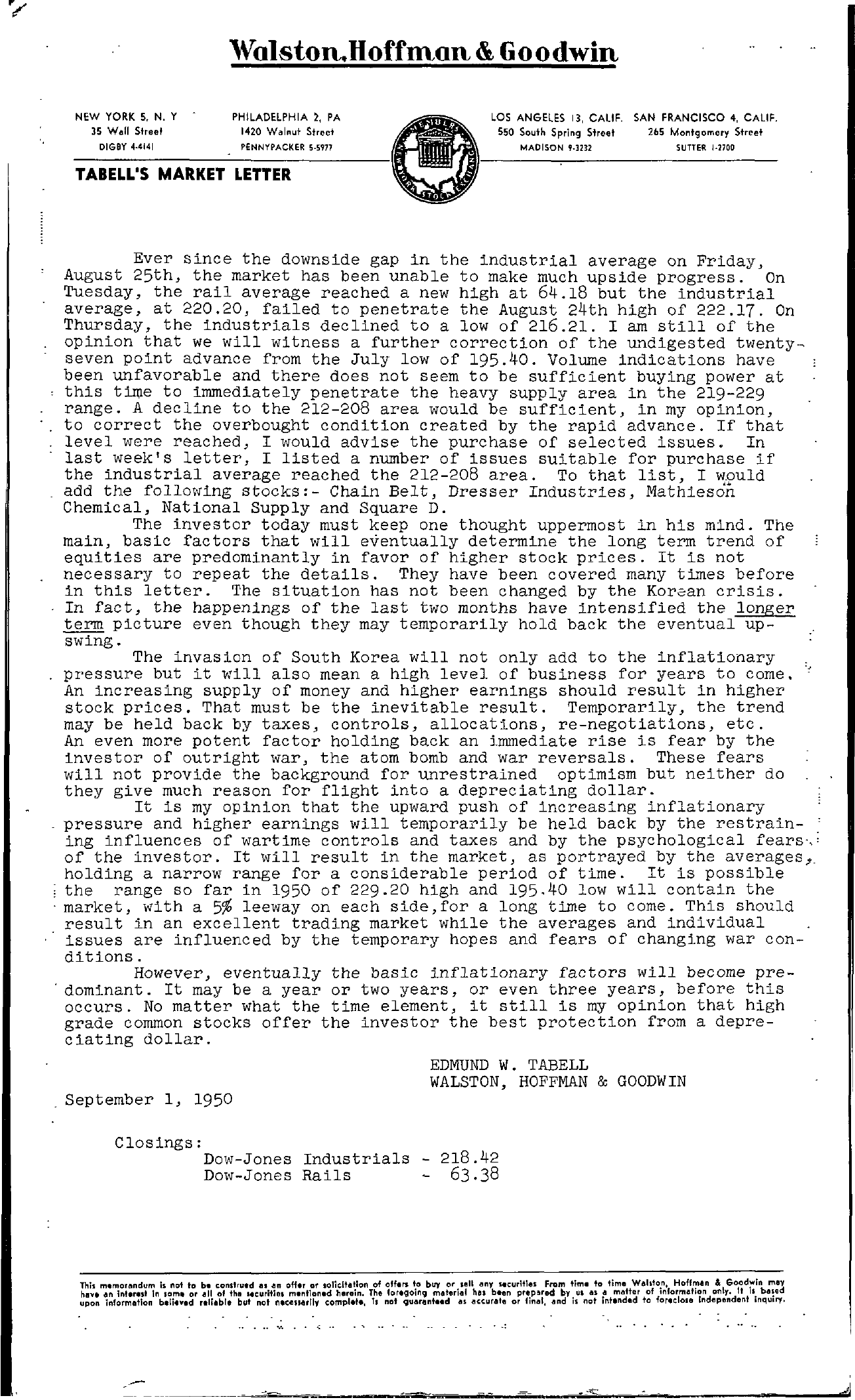 Walston.Hoffman &Goodwin NEW YORK 5, N, Y 35 Wall Street DIGBY 4-4141 PHILADELPHIA , PA 1420 Walnut Street PENNYPACKER 5S'in TABELL'S MARKET LETTER LOS ANGELES 13, CALIF, 550 South Spring Street MADISON '3212 SAN FRANCISCO 4, CALIF, 2b5 Montgomery Street SUTTER 12700 Ever since the downside gap in the industrial average on Friday, August 25th, the market has been unable to make much upside progress. On Tuesday, the rail average reached a new high at 64.18 but the industrial average, at 220.20, failed to penetrate the August 24th high of 222.17. On Thursday, the industrials declined to a low of 216.21. I am still of the opinion that we will witness a further correction of the undigested twenty-, seven point advance from the July low of 195.40. Volume indications have been unfavorable and there does not seem to be sufficient buying power at this time to immediately penetrate the heavy supply area in the 219-229 range. A decline to the 212-208 area would be suffiCient, in my opinion, to correct the overbought condition created by the rapid advance. If that level were reached, I would advise the purchase of selected issues. In last week's letter, I listed a number of issues suitable for purchase if the industrial average reached the 212-208 area. To that list, I would add the following stocks- Chain Belt, Dresser Industries, Mathieson Chemical, National Supply and Square D. The investor today must keep one thought uppermost in his mind. The main, basic factors that will eventually determine the long term trend of equities are predominantly in favor of higher stock prices. It is not necessary to repeat the details. They have been covered many times before in this letter. The situation has not been changed by the Korean criSis. In fact, the happenings of the last two months have intensified the longer term picture even though they may temporarily hold back the eventual up- swing. The invasion of South Korea will not pressure but it will also mean a high level only add to of business the for inflationary years to come. -, An increasing supply of money and higher earnings should result in higher stock prices. That must be the inevitable result. Temporarily, the trend may be held back by taxes, controls, allocations, re-negotiations, etc. An even more potent factor holding back an immediate rise is fear by the investor of outright war, the atom bomb and war reversals. These fears will not provide the background for unrestrained optimism but neither do they give much reason for flight into a depreciating dollar. It is my opinion that the upward push of increasing inflationary pressure and higher earnings will temporarily be held back by the restrain- ing influences of wartime controls and taxes and by the psychological fears-.; of the investor. It will result in the market, as portrayed by the averages holding a narrow range for a considerable period of time. It is possible ,the range so far in 1950 of 229.20 high and 195.40 low will contain the – market, with a 5 leeway on each side, for a long time to come. This should result in an excellent trading market while the averages and individual issues are influenced by the temporary hopes and fears of changing war con- ditions. However, eventually the basic inflationary factors will become pre- 'dominant. It may be a year or two years, or even three years, before this occurs. No matter what the time element, it still is my opinion that high grade common stocks offer the investor the best protection from a depre- ciating dollar. September 1, 1950 EDMUND W. TABELL WALSTON, HOFFMAN & GOODWIN Closings; Dow-Jones Industrials – 218.42 Dow-Jones Rails 63.38 Thil memorandum Is not hue an Int.rest In some to or b. all construed ,/II .an 01 the securities offer or sol1c1tllllon of mentioned herein. The oHeri to buy or sell any securities From time to time Waldo., Hoff'!lfln foregoin9 material hu been prepued by us as II matter of tnformehon o&nlyG. oIotdwIsinbameady upon Information ben..,ed rellabr. but not eCflnarlly complete, 11 nof quarufd as ccurate or final, and il not Intended to foreclole Independent inq\llry. . . … . … .. . . -t., .