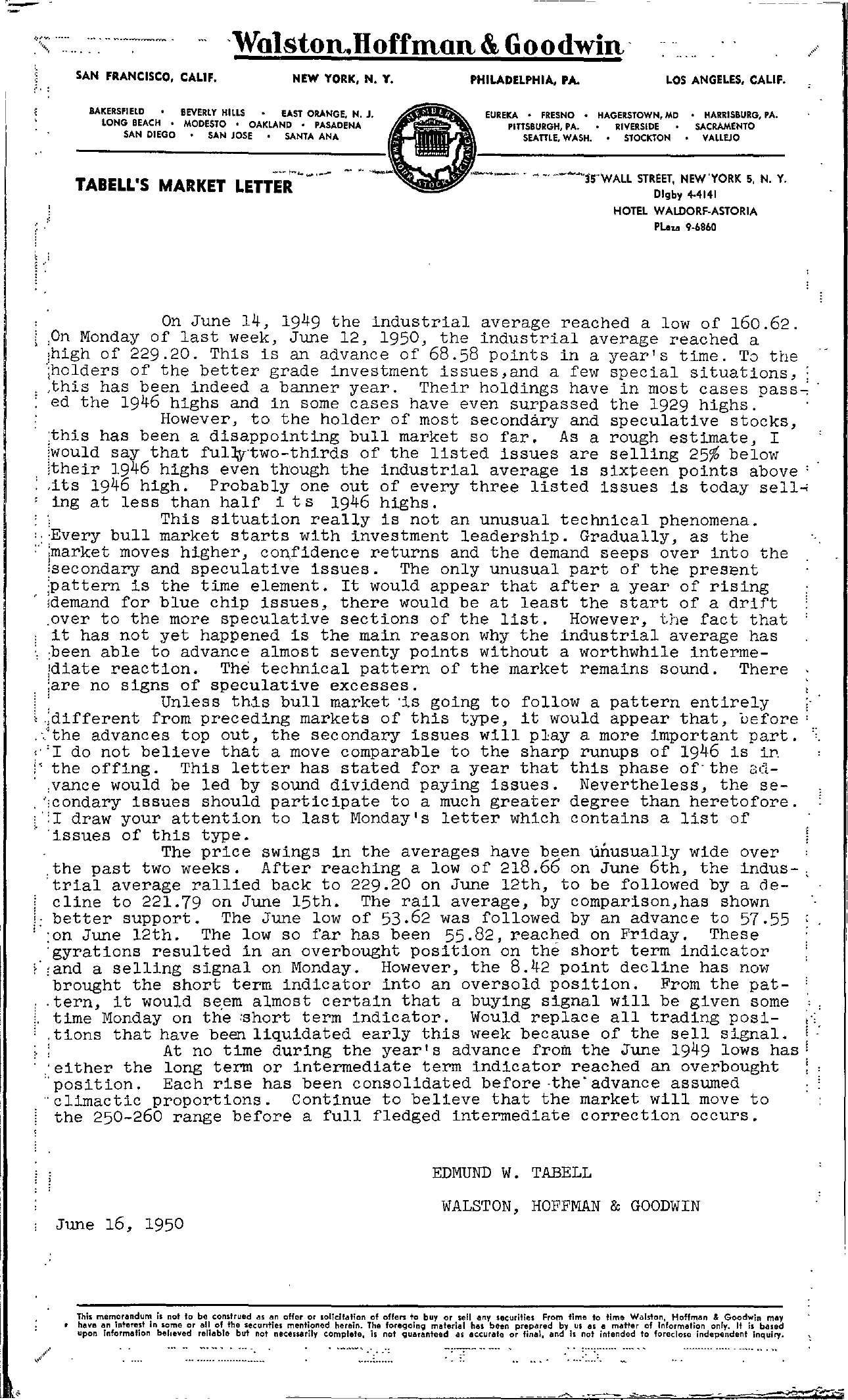 '- .If …. , …….. ..-.-. 'Walston-Hoffman &, Goodwin' SAN FRANCISCO, CALIF. NEW YORK, N. Y. PHILADELPHIA, , …. LOS ANGELES, CALIF. BAKERSfiElD BEVERLY HILLS EAST ORANGE. H. J. LONG BEACH MODESTO OAKLAND PASADENA SAN DIEGO SAN JOSE SANTA ANA EUREKA FRESNO HAGERSTOWN, MD HARRISBURG, PA. PITTSBURGH, PA. RIVERSIDE SACRAMENTO SEATTLE, WASH. STOCKTON VALLEJO – 1- ' . TABELL'S MARKET LETTER ,, . '–'-'' , ''''—jS'WALL STREET, NEW 'YORK 5, N. Y. Digby 4-4141 HOTEL WALDORFASTORIA PLa, 9-6810 On June 14, 1949 the industrial average reached a low of 160.62, ,On Monday of last week, June 12, 1950, the industrial average reached a ihigh of 229.20. This is an advance of 68.58 points in a year's time. To the ';holders of the better grade investment issues,and a few special situations, .this has been indeed a banner year. Their holdings have in most cases pass ed the 1946 highs and in some cases have even surpassed the 1929 highs. However, to the holder of most secondary and speculative stocks, ;this has been a disappointing bull market so far. As a rough estimate, I iwould say that fulJ;y'two-thirds of the listed issues are selling 25 below itheir 1946 highs even though the industrial average is sixteen pOints above .its 1946 high. Probably one out of every three listed issues is today sell ing at less than half its 1946 highs. ; This situation really is not an unusual technical phenomena . ., Every bull market starts with investment leadership. Gradually, as the jmarket moves higher, confidence returns and the demand seeps over into the ,secondary and speculative issues. The only unusual part of the present attern is the time element. It would appear that after a year of rising ,demand for blue chip issues, there would be at least the start of a drift ,over to the more speculative sections of the list. However, the fact that it has not yet happened is the main reason why the industrial average has been able to advance almost seventy points without a worthwhile interme- ldiate reaction. The technical pattern of the market remains sound. There ;are no signs of speculative excesses. , Unless this bull market 'is going to follow a pattern entirely ; \ ,;different from preceding markets of this type, it would appear that, oefore' ,','the advances top out, the secondary issues will playa more important part. ,I do not believe that a move comparable to the sharp runups of 1946 is iI', !, the offing. This letter has stated for a year that this phase of'the ad- . ,vance would be led by sound dividend paying issues. Nevertheless, the se- ,';condary issues should partiCipate to a much greater degree than heretofore. I draw your attention to last Monday's letter which contains a list of 'issues of this type. The price swings in the averages have been unusually wide over , ,the past two weeks. After reaching a low of 218.66 on June 6th, the indus-, 'trial average rallied back to 229.20 on June 12th, to be followed by a de- I cline to 221.79 on June 15th. The rail average, by comparison,has shown ! better support. The June low of 53.62 was followed by an advance to 57.55 , on June 12th. The low so far has been 55.82, reached on Friday. These 'gyrations resulted in an overbought position on the short term indicator f' ,and a selling signal on Monday. However, the 8.42 point decline has now brought the short term indicator into an oversold position. From the pat- , ,tern, it would seem almost certain that a buying signal will be given some L time Monday on the short term indicator. Would replace all trading posii ,tions that have been liquidated early this week because of the sell signal. !.' ; At no time during the year's advance from the June 1949 lows has! ,'either the long term or intermediate term indicator reached an overbought position. Each rise has been consolidated before ,the'advance assumed climactic proportions. Continue to believe that the market will move to the 250-260 range before a full fledged intermediate correction occurs. June 16, 1950 EDMUND W. TABELL WALSTON, HOFFMAN & GOODWIN Thi, memorandum Is not to be con5trLled as an offer or solicitation of offen to buy or sell any securities From time to time Walston, Hoffman & Goodwin may have an Intetflst In lome or all of the seCUrities mentioned herein. The foregoing material has been prepared by us as a matter of Information only. It is based upon Information beheved rellablo but not neceuarily complete, is not guaranteed as accurate or final, and II not intended to foreclose independent inquiry. ——–.,/.. …..