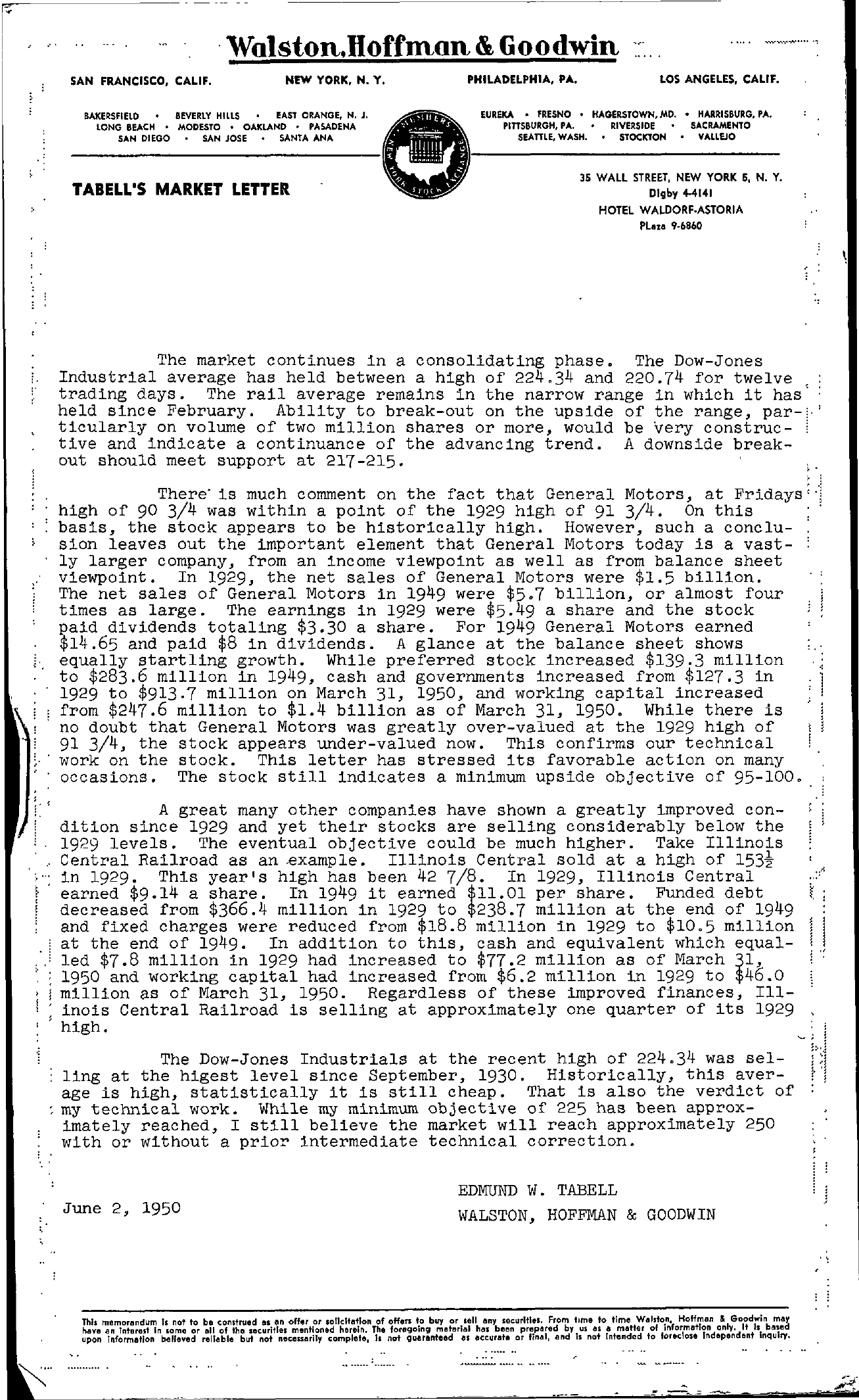 ,Wolston.Hoffmon Goodwin'& ., , …. ……………………. SAN FRANCISCO, CALIF. NEW YORK, N. Y. PHILADELPHIA, PA. LOS ANGELES, CALIF. BAKERSFIELD 8EVERlY HillS EAST ORANGE, N. J. LONG BEACH MODESTO OAkLAND PASAOENA SAN DIEGO SAN JOSE SANTA ANA EUREKA fRESNO HAGERSTOWN .MD. HARRISBURG, PA. PITTSBURGH, PA. RIVERSIDE SACRAMENTO SEATTLE, WASH. STOCKTON VALLEJO TABELL'S MARKET LETTER 35 WALL STREET, NEW YORK 5, N. Y. Digby 4-4141 HOTEL WALDORF.ASTORIA PLata 9-6860 The market continues in a consolidating phase. The Dow-Jones Industrial average has held between a high of 224.34 and 220.74 for twelve. !' trading days. The rail average remains in the narrow range in which it has' held Since February. Ability to break-out on the upside of the range, par-i ticularly on volume of two million shares or more, would be very construc- i tive and indicate a continuance of the advancing trend. A downside break- out should meet support at 217-215. ,i There' is much comment on the fact that General Motors, at Fridays high of 90 3/4 was within a point of the 1929 high of 91 3/4. On this ' basis, the stock appears to be historically high. However, such a conclu- sion leaves out the important element that General Motors today is a vast- ly larger company, from an income viewpoint as well as from balance sheet , viewpoint. In 1929, the net sales of General Motors were 1.5 billion. , The net sales of General Motors in 1949 were 5.7 billion, or almost four times as large. The earnings in 1929 were 5.49 a share and the stock paid dividends totaling 3.30 a share. For 1949 General Motors earned 14.65 and paid 8 in dividends. A glance at the balance sheet shows equally startling growth. While preferred stock increased 139.3 million to 283.6 million in 1949, cash and governments increased from 127.3 in 1929 to 913.7 million on March 31, 1950, and working capital increased from 247.6 million to 1.4 billion as of March 31, 1950. While there is no doubt that General Motors was greatly over-valued at the 1929 high of 91 3/4, the stock appears under-valued now. This confirms our technical work on the stock. This letter has stressed its favorable action on many occasions. The stock still indicates a minimum upside objective of 95-100. A great many other companies have shown a greatly improved con- dition since 1929 and yet their stocks are selling considerably below the 1929 levels. The eventual objective could be much higher. Take Illinois Central Railroad as an xample. Illinois Central sold at a high of 153t .., in 1929. This year's high has been 42 7/8. In 1929, Illinois Central \' earned 9.14 a share. In 1949 it earned 11.01 per share. Funded debt i decreased from 366.4 million in 1929 to 238.7 million at the end of 1949 i and fixed charges were reduced from 18.8 million in 1929 to 10.5 million at the end of 1949. In addition to this, cash and equivalent which equalled 7.8 million in 1929 had increased to 77.2 million as of March 31, 1950 and working capital had increased from 6.2 million in 1929 to 46.0 million as of March 31, 1950. Regardless of these improved finances, Illinois Central Railroad is selling at approximately one quarter of its 1929 high. .. / ,I The Dow-Jones Industrials at the recent high of 224.34 was selling at the higest level since September, 1930. Historically, this aver- age is high, statistically it is still cheap. That is also the verdict of ; my technical work. While my minimum objective of 225 has been approximately reached, I still believe the market will reach approximately 250 with or without a prior intermediate technical correction. June 2, 1950 EDMUND W. TABELL WALSTON, HOFFMAN & GOODWIN This memorndum Is not to be construed ell n offer or lolldttlon of offers to buy or sell any securities. From time to time Wallto.n, Hoffman & Goodwin may have ,an Interett In lome or all of the securities mentioned heroin. The foregoing mllterial hs been prepared by us as a matter of ,formation only. It Is based upon Information believed reliable but not neceuarlly complete, Is not IjIll8tanteed as accurate or final, and Is not Intended to foreclose Independent Inquiry. ..