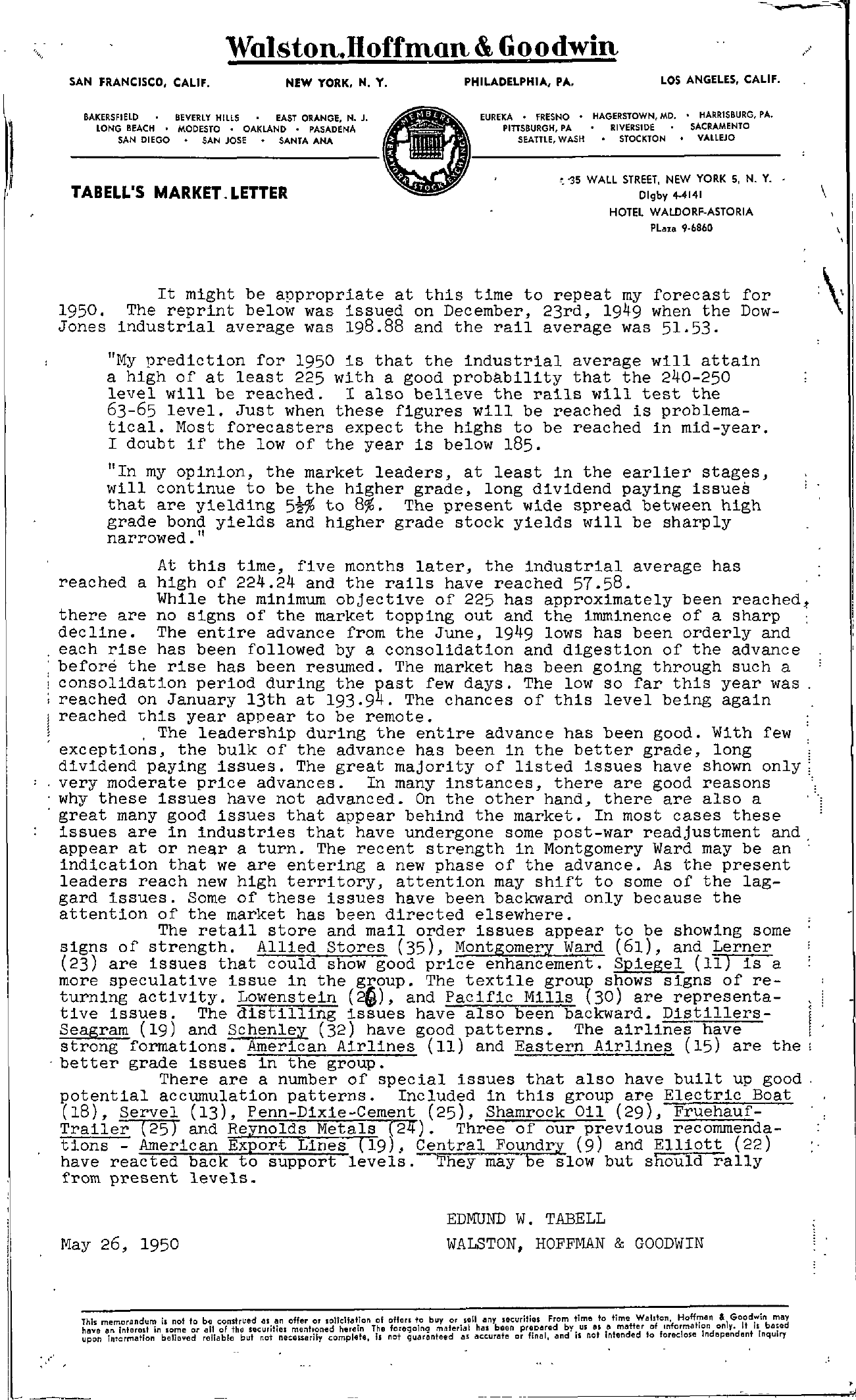 Walston.Hoffman &, Goodwin SAN FRANCISCO, CALIF. NEW YORK, N. Y. PHILAOELPHIA, PA. -. LOS ANGELES, CALIF. BAKERSFIELD BEVERLY HILLS EAST ORANGE. N. J. LONG BEACH MODESTO OAKLAND PASADENA SAN 01 EGO SAN JOSE SANTA ANA ) TABELL'S MARKET. LETTER EUREKA FRESNO HAGERSTOWN, MD. HARRISBURG, PA. PITTSBURGH, PA RIVERSIDE SACRAMENTO SEATTLE, WASH STOCKTON VAllEJO '.35 WALL STREET. NEW YORK 5. N. Y. Digby 4-4141 HOTEL WALDORF.ASTORIA PLaza 96860 \ ! \I It might be appropriate at this time to repeat my forecast for 1950. The reprint below was issued on December, 23rd, 1949 when the DowJones industrial average was 198.88 and the rail average was 51.53. \ My prediction for 1950 is that the industrial average will attain a high of at least 225 with a good probability that the 240-250 level will be reached. I also believe the rails will test the 63-65 level. Just when these figures will be reached is problematical. Most forecasters expect the highs to be reached in mid-year. I doubt if the low of the year is below 185. In my opinion, the market leaders, at least in the earlier stages, will continue to be the higher grade, long dividend paying issues that are yielding 5t to 8. The present wide spread between high grade bond yields and higher grade stock yields will be sharply narrowed. At this time, five months later, the industrial average has reached a high of 224.24 and the rails have reached 57.58. While the minimum objective of 225 has approximately been reached, there are no signs of the market topping out and the imminence of a sharp . decline. The entire advance from the June, 1949 lows has been orderly and each rise has been followed by a consolidation and digestion of the advance before the rise has been resumed. The market has been gOing through such a consolidation period during the past few days. The low so far this year was. reached on January 13th at 193.94. The chances of this level being again reached chis year appear to be remote . . The leadership during the entire advance has been good. With few exceptions, the bulk of the advance has been in the better grade, long dividend paying issues. The great majority of listed issues have shown onlYi very moderate price advances. In many instances, there are good reasons why these issues have not advanced. On the other hand, there are also a great many good issues that appear behind the market. In most cases these issues are in industries that have undergone some post-war readjustment and. appear at or near a turn. The recent strength in Montgomery Ward may be an indication that we are entering a new phase of the advance. As the present leaders reach new high territory, attention may shift to some of the laggard issues. Some of these issues have been backward only because the attention of the market has been directed elsewhere. The retail store and mail order issues appear to be showing some signs of strength. Allied Stores (35), Montgomery Ward (61), and Lerner (23) are issues that could show good price enhancement. Spiegel (11) is a more speculative issue in the group. The textile group shows signs of returning activity. Lowenstein (), and Pacific Mills (30) are representative issues. The distilling issues have also been backward. DistillersSeagram (19) and Schenley (32) have good patterns. The airlines have strong formations. American Airlines (11) and Eastern Airlines (15) are the, . better grade issues in the group. There are a number of special issues that also have built up good. potential accumulation patterns. InclUded in this group are Electric Boat (18), Servel (13), Penn-Dixie-Cement (25), Shamrock Oil (29), FruehaufTrailer (25) and Reynolds Metals (24). Three of our previous recommendations – American Export Lines (19), Central Foundry (9) and Elliott (22) have reacted back to support levels.–They may be slow but should rally from present levels. May 26, 1950 EDMUND W. TABELL WALSTON, HOFFMAN & GOODWIN Th15 memorandum II not have an interelt in some to or be all construed as .!In of tho securitiel offer or soltdfation of mentioned herein The ofofhremgotiongbumy.1oterrialelUhaasnybeuelncurpirtieDsarlFdrombyt.iUm5 e to IU a time Wa15tcn, Hoffrpan matter of Informahon & Goodwin may only, It Is based upon Imormation believed reliable but not necessarily complete, Is not guaranteed as accurate or fInal, and IS not Intended to foreclose Independent Inquiry .