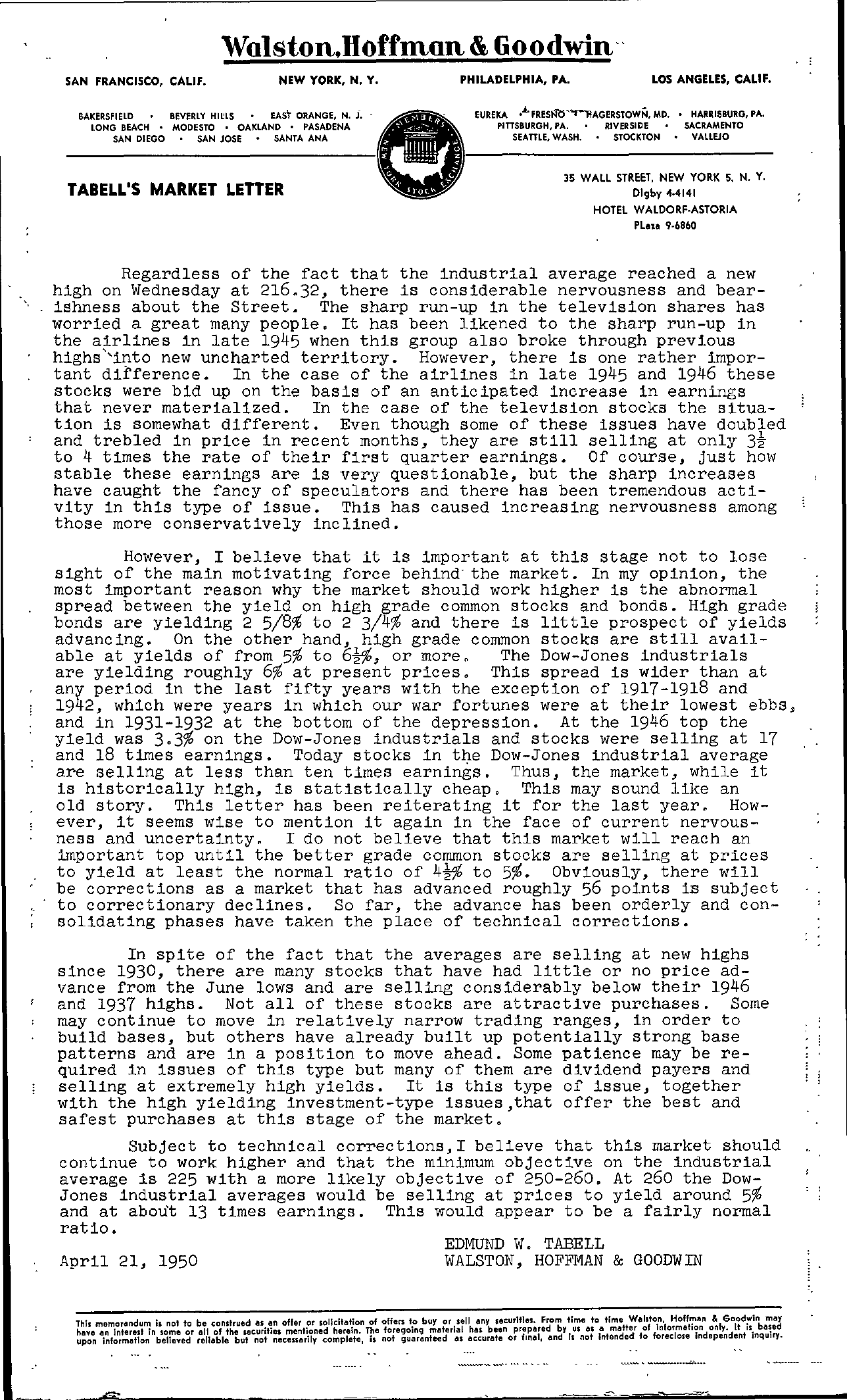 Walston.Hoffman &, Goodwin SAN FRANCISCO, CALIF. NEW YORK, N. Y. PHILADELPHIA, PA. LOS ANGELES, CALIF. BAKERSFIELD BEVERLY HIl!LS EAsT ORANGE, N. J. – LONG BEACH MODESTO OAKLAND PASADENA SAN DIEGO SAN JOSE SANTA ANA EUREKA .4. FRESd 'f-RAGERSTOWN, MD. HARRISBURG, PA. PITTSBURGH, PA. RIVERSIDE SACRAMENTO SEATTLE, WASH. STOCKTON VAllEJO TABELL'S MARKET LETTER 35 WALL STREET, NEW YORK 5, N. Y. Digby 4-4141 HOTEL WALDORFASTORIA PLaza 96860 Regardless of the fact that the industrial average reached a new high on Wednesday at 216.32, there is considerable nervousness and bear'. ishness about the Street. The sharp run-up in the television shares has worried a great many people, It has been likened to the sharp run-up in the airlines in late 1945 when this group also broke through previous highsinto new uncharted territory. However, there is one rather important difference. In the case of the airlines in late 1945 and 1946 these stocks were bid up on the baSis of an anticipated increase in earnings that never materialized. In the case of the television stocks the situation is somewhat different. Even though some of these issues have doubled and trebled in price in recent months, they are still selling at only 3 to 4 times the rate of their first quarter earnings. Of course, just how stable these earnings are is very questionable, but the sharp increases have caught the fancy of speculators and there has been tremendous activity in this type of issue. This has caused increasing nervousness among those more conservatively inclined. However, I believe that it is important at this stage not to lose sight of the main motivating force behind'the market. In my opinion, the most important reason why the market should work higher is the abnormal spread between the yield on high grade common stocks and bonds, High grade bonds are yielding 2 5/8 to 2 3/4 and there is little prospect of yields advancing. On the other hand, high grade common stocks are still available at yields of from 5 to 6, or more, The Dow-Jones industrials are yielding roughly 6 at present prices, This spread is wider than at any period in the last fifty years with the exception of 1917-1918 and 1942, which were years in which our war fortunes were at their lowest ebbs, and in 1931-1932 at the bottom of the depression. At the 1946 top the yield was 3,3 on the Dow-Jones industrials and stocks were selling at 17 and 18 times earnings. Today stocks in the Dow-Jones industrial average are selling at less than ten times earnings. Thus, the market, while it is historically high, is statistically cheap, This may sound like an old story. This letter has been reiterating it for the last year. However, it seems wise to mention it again in the face of current nervous- ness and uncertainty. I do not believe that this market will reach an important top until the better grade common stocks are selling at prices to yield at least the normal ratio of 4 to 5. Obviously, there will be corrections as a market that has advanced roughly 56 points is subject to correctionary declines. So far, the advance has been orderly and con- solidating phases have taken the place of technical corrections. In spite of the fact that the averages are selling at new highs since 1930, there are many stocks that have had little or no price advance from the June lows and are selling considerably below their 1946 and 1937 highs. Not all of these stocks are attractive purchases. Some may continue to move in relatively narrow trading ranges, in order to build bases, but others have already built up potentially strong base patterns and are in a position to move ahead. Some patience may be required in issues of this type but many of them are dividend payers and selling at extremely high yields. It is this type of issue, together with the high yielding investment-type issues,that offer the best and safest purchases at this stage of the market. Subject to technical corrections,I believe that this market should continue to work higher and that the minimum objective on the industrial average is 225 with a more likely objective of 250-260. At 260 the Dow- Jones industrial averages would be selling at prices to yield around 5 and at about 13 times earnings. This would appear to be a fairly normal ratio. EDMUND W, TABELL April 21, 1950 WALSTON, HOFFMAN & GOODWIN This memorandum I, not to be construed liS an offer or solicitation of offers to buy or sell any securities. From time to time Walston, Hoffr;olln & Good;in may have o!In Interest In some or all of the ,ecuritiel mentioned herein. The foregoing mllterial hal been prepared by us as a matter of Information only. It IS. based upon lnformlltlon believed reliable but not neceuo!Irily complete, is not guaranteed as o!Iccurate or final, end Is not Intended to foreclose Independent Inquiry.