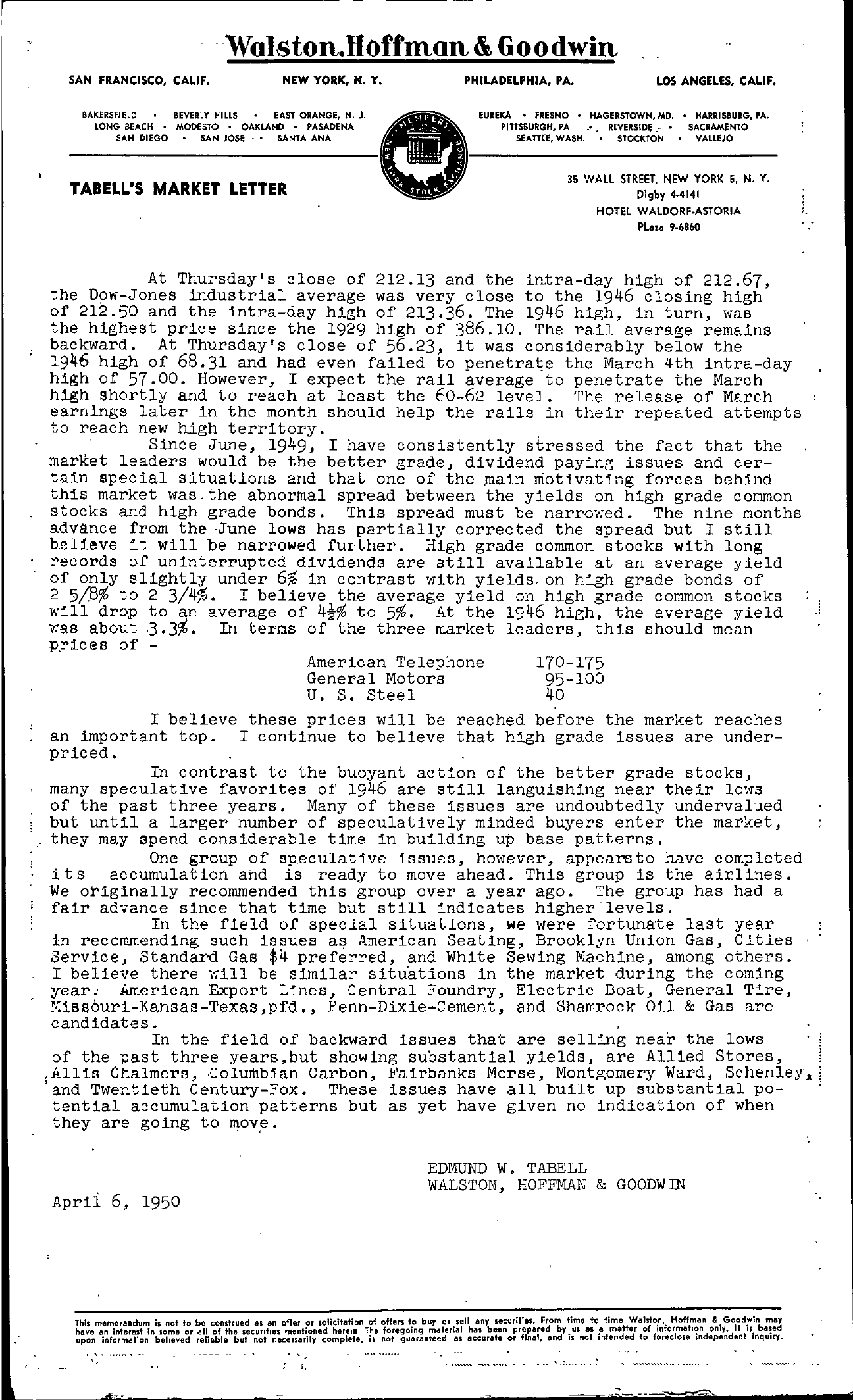 Walston-Hoffman &. Goodwin SAN FRANCISCO, CALIF. NEW YORK, N. Y. PHILADELPHIA, PA. LOS ANGELES, CALIF. BAKERSfiELD BEVERLY HILLS EAST ORANGE, N. J. LONG EACH MODESTO OAKLAND PASADENA SAN DIEGO SAN JOSE . SANTA ANA EUREKA FRESNO HAGERSTOWN, MD. HARRISBURG, PA. PITTSBURGH, PA .0. RlVERSIDe' SACRAMeNTO SEATTLE, WASH. STOCKTON VALLEJO TABELL'S MARKET LETTER 35 WALL STREET. NEW YORK 5. N. y, Digby 4-4141 HOTEL WALDORF.ASTORIA PL. 96860 At Thursday's close of 212.13 and the intra-day high of 212.67, the Dow-Jones industrial average was very close to the 1946 closing high of 212.50 and the intra-day high of 213.36. The 1946 high, in turn, was the highest price since the 1929 high of 386.10. The rail average remains backward. At Thursday's close of 56.23, it was considerably below the 1946 high of 68.31 and had even failed to penetrae the March 4th intra-day high of 57.00. However, I expect the rail average to penetrate the March high Shortly and to reach at least the 60-62 level. The release of March earnings later in the month should help the rails in their repeated attempts to reach new high territory. , SinCe June, 1949, I have conSistently stressed the fact that the marKet leaders would be the better grade, dividend paying issues and cer- tain special situations and that one of the main motivating forces behind this market was.the abnormal spread between the yields on high grade common stocks and high grade bonds. This spread must be narrowed. The nine months advance from the June lows has partially corrected the spread but I still b.elieve it will be narrowed further. High grade common stocks with long records of uninterrupted dividends are still available at an average yield of 2 5!oBnly s to l ig 2 htly 3/4. under 6 in I believe contrast with yields. on high grade bonds of the average yield on high grade common stocks will drop to an average of 4t to 5. At the 1946 high, the average yield was about 3.3. In terms of the three market leaders, this should mean p,rices of – American Telephone 170-175 General Motors 95-100 U. S. Steel 40 I believe these prices will be reached before the market reaches an important top. I continue to believe that high grade issues are underpriced. In contrast to the buoyant action of the better grade stocks, many speculative favorites of 1946 are still languishing near their lows of the past three years. Many of these issues are undoubtedly undervalued but until a larger number of speculatively minded buyers enter the market, they may spend considerable time in building. up base patterns. One group of sp.eculative issues, however, appears to have completed its accumulation and is ready to move ahead. This group is the airlines. We oiginally recommended this group over a year ago. The group has had a fair advance since that time but still indicates higher'levels. In the field of special situations, we were fortunate last year in recommending such issues a American Seating, Brooklyn Union Gas, Cities Service, Standard Gas 4 preferred, and White Sewing Machine, among others. I believe there will be similar situations in the market during the corning year. American Export Lines, Central Foundry, Electric Boat, General Tire, Miss6uri-Kansas-Texas,pfd., Penn-Dixie-Cement, and Shamrock Oil & Gas are candidates. , In the field of backward issues that are selling near the lows of the past three years, but showing substantial yields, are Allied Stores, , Allis Chalmers, ,Columbian Carbon, Fairbanks Morse, Montgomery Ward, Schenley. i 'and Twentieth Century-Fox. These issues have all built up substantial po- . tential accumulation patterns but as yet have given no indication of when they are going to mov,e. Aprii 6, 1950 EDMUND W. TABELL WALSTON, HOFFMAN & GOODWIN This memorandum is not to be construed as an offer or solicito!ltion of offan to buy or sell any sec.urltlel. From time to time Walsto,n, Hoffman & Goodln may have an interest In lome or all of the lecunhes mentioned herein The foregoing material hal been prpar.d by us al !I matter of Informafln only. It IS based upon information believed reliable but not necessarily complete, is not guaranteed as accurate or final, and Is not Intended to foreclose Independent Inquiry. . '- … ….. — – —