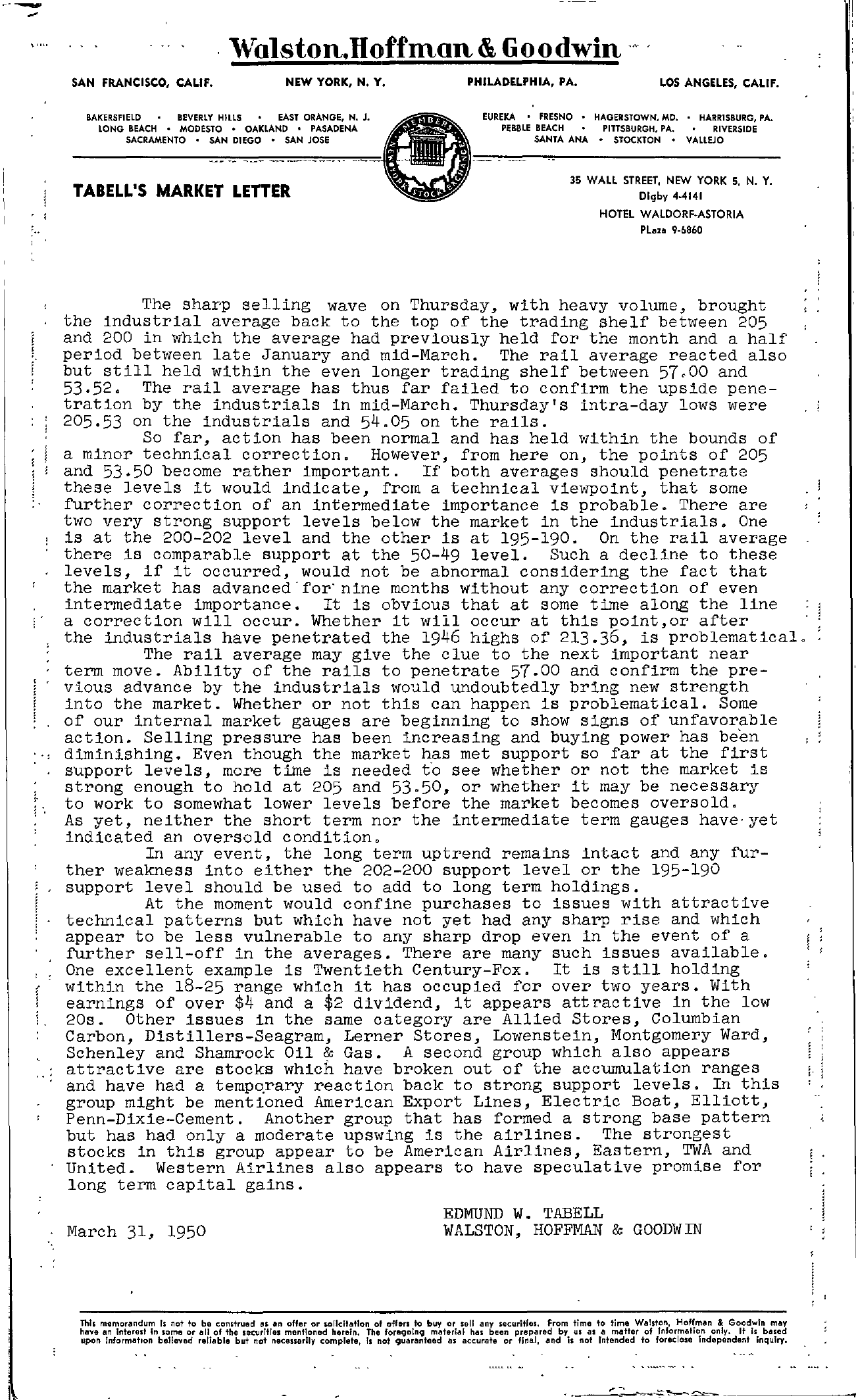 -',,,,, Walston.Hoffman &, Goodwin SAN FRANCISCO, CALIF, NEW YORK, N. Y. PHILADELPHIA, PA. LOS ANGELES, CALIF. BAKERSFIELD BEVERLY HillS EAST ORANGE. N. J. LONG BEACH MODESTO OAKLAND PASADENA SACRAMENTO SAN DIEGO SAN JOSE EUREKA FRESNO HAGERSTOWN, MD. HARRISBURG, PA. PEBBLE BEACH PITTSBURGH, PA. RIVERSIDE SANTA ANA STOCKTON VALLEJO lABELL'S MARKEl LETTER 35 WALL STREET. NEW YORK 5. N. Y. Digby 4.4141 HOTEL WALDORF.ASTORIA PLlIla 9-6860 The shar'p selling wave on Thursday, with heavy VOlume, brought the industrial average back to the top of the trading shelf between 205 and 200 in which the average had previously held for the month and a half period between late January and mid-March. The rail average reacted also but still held within the even longer trading shelf between 57000 and 53.52. The rail average has thus far failed to confirm the upside pene- tration by the industrials in mid-March. Thursday's intra-day lows were 205.53 on the industrials and 54.05 on the rails. So far, action has been normal and has held within the bounds of a minor technical correction. However, from here on, the pOints of 205 and 53.50 become rather important. If both averages should penetrate these levels it would indicate, from a technical viewpoint, that some further correction of an intermediate importance is probable. There are two very strong support levels below the market in the industrials. One is at the 200-202 level and the other is at 195-190. On the rail average there is comparable support at the 50-49 level. Such a decline to these levels, if it occurred, would not be abnormal considering the fact that the market has advanced 'for' nine months without any correction of even intermediate importance. It is obvious that at some time along the line a correction will occur. Whether it will occur at this point,or after the industrials have penetrated the 1946 highs of 213.36, is problematical. The rail average may give the clue to the next important near term move. Ability of the rails to penetrate 57.00 and confirm the pre- vious advance by the industrials would undoubtedly bring new strength into the market. Whether or not this can happen is problematical. Some of our internal market gauges are beginning to show signs of unfavorable action. Selling pressure has been increaSing and buying power has been ' diminishing. Even though the market has met support so far at the first support levels, more time is needed fo see whether or not the market is ;. strong enough to hold at 205 and 53.50, or whether it may be necessary to work to somewhat lower levels before the market becomes oversold. As yet, neither the short term nor the intermediate term gauges have'yet indicated an oversold condition. In any event, the long term uptrend remains intact and any fur- ther weakness into either the 202-200 support level or the 195-190 support level should be used to add to long term holdings. At the moment would confine purchases to issues with attractive technical patterns but which have not yet had any sharp rise and which appear to be less vulnerable to any sharp drop even in the event of a further sell-off in the averages. There are many such issues available. One excellent example is Twentieth Century-Fox. It is still holding within the 18-25 range which it has occupied for over two years. With earnings of over 4 and a 2 dividend, it appears attractive in the low 20s. Other issues in the same category are Allied Stores, Columbian Carbon, Distillers-Seagram, Lerner Stores, Lowenstein, Montgomery Ward, Schenley and Shamrock Oil & Gas. A second group which also appears attractive are stocks which have broken out of the accumulation ranges and have had a temprary reaction back to strong support levels. In this group might be mentioned American Export Lines, Electric Boat, Elliott, Penn-Dixie-Cement. Another group that has formed a strong base pattern but has had only a moderate upswing is the airlines. The strongest stocks in this group appear to be American Airlines, Eastern, TWA and United. Western Airlines also appears to have speculative promise for long term capital gains. March 31, 1950 EDMUND W. TABELL WALSTON, HOFFMAN & GOODWIN Thl, memorandum Is not to be construed, an offer or solldtatlon of offers to buy Of sell any securitIes. from time to time Walston, Hoffman & GoodwIn may hlIve an Interest In some or all of the securities mentIoned herein. The foregoIng material has been prepared by us as a matter of Information only. It I, based upon Information believed reliable but not necessarily complete, Is not ljIuaranteed as accurate or flIla, and is not Intended to foreclose Independent Inquiry.