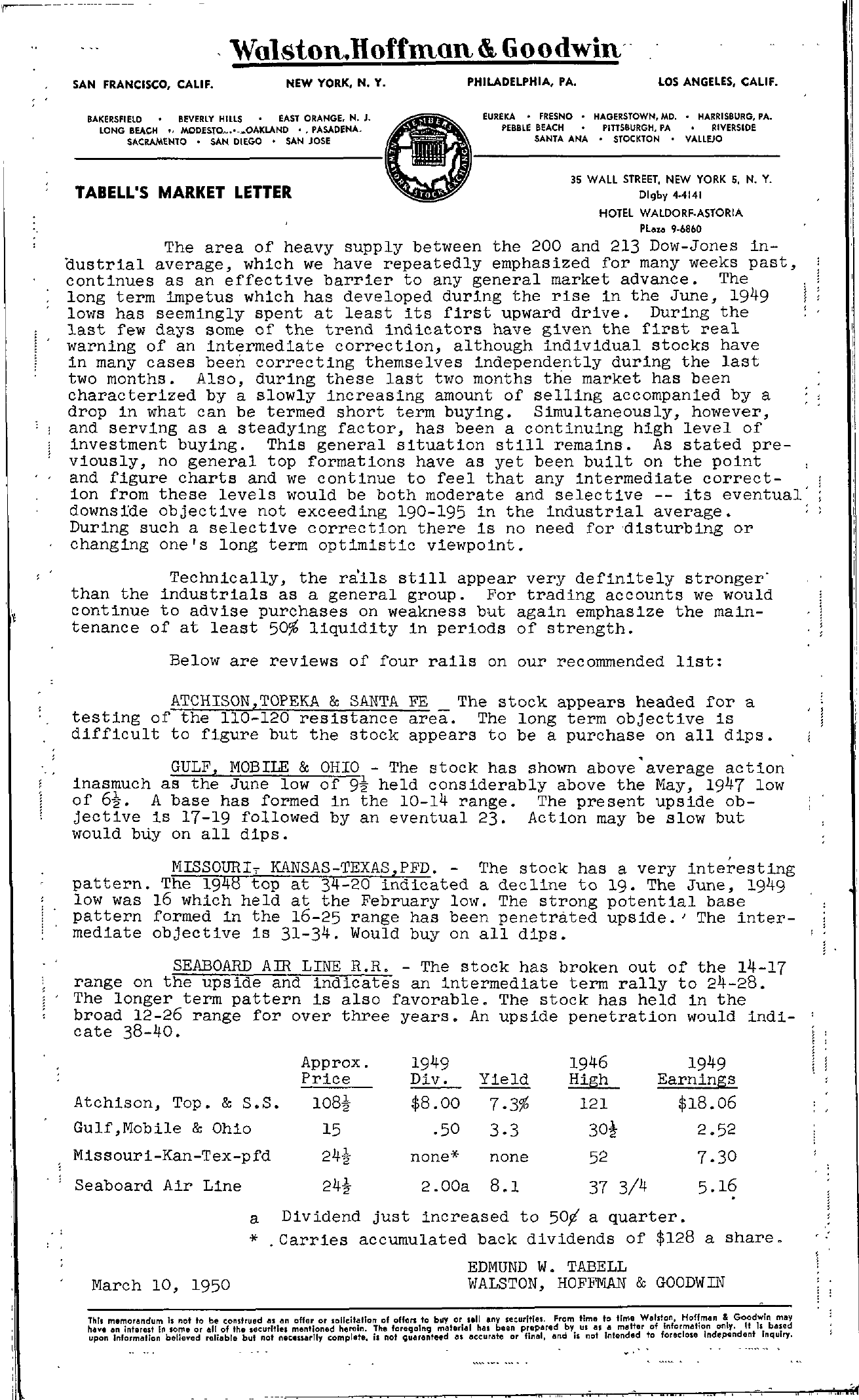 Ir—- — Wolston.Hoffmon &. Goodwin' SAN FRANCISCO, CALIF. NEW YORK, N. Y. PHILADELPHIA, PA. LOS ANGELES, CALIF. BAKERSFIELD BEVERLY HILLS EAST ORANGE, N. J. LONG BEACH ., MODf5.TO..,. ….OAKLAND PASADENA. SACRAMENTO SAN DIEGO SAN JOSE EUREKA FRESNO HAGERSTOWN, MD. HARRISBURG, PA. PEBBLE BEACH PITTSBURGH, PA RIVERSIDE SANTA ANA STOCKTON VALLEJO TABELL'S MARKET LETTER 35 WALL STREET, NEW YORK 5, N, y, Digby 44141 HOTEL WALDORF,ASTORIA Plaza 9-6860 The area of heavy supply between the 200 and 213 Dow-Jones in- austrial average, which we have repeatedly emphasized for many weeks past, continues as an effective barrier to any general market advance. The long term impetus which has developed during the rise in the June, 1949 lows has seemingly spent at least its first upward drive. During the last few days some of the trend indicators have given the first real warning of an intermediate correction, although individual stocks have in many cases been correcting themselves independently during the last two months. Also, during these last two months the market has been characterized by a slowly increasing amount of selling accompanied by a drop in what can be termed short term buying. Simultaneously, however, and serving as a steadying factor, has been a continuing high level of investment buying. This general Situation still remains. As stated pre- viously, no general top formations have as yet been built on the point and figure charts and we continue to feel that any intermediate correction from these levels would be both moderate and selective — its eventual' downside objective not exceeding 190-195 in the industrial average. During such a selective correction there is no need for 'disturbing or changing one's long term optimistic viewpoint. Technically, the rails still appear very definitely stronger' than the industrials as a general group. For trading accounts we would continue to advise purchases on weakness but again emphasize the main- tenance of at least 50 liquidity in periods of strength. Below are reviews of four rails on our recommended list ATCHISON,TOPEKA & SANTA FE The stock appears headed for a testing of the 110-120 reSistance area. The long term objective is difficult to figure but the stock appears to be a purchase on all dips. GULF, MOBILE & OHIO – The stock has shown aboveaverage action inasmuch as the June low of 9 held considerably above the May, 1947 low of 6. A base has formed in the 10-14 range. The present upside ob- jective is 17-19 followed by an eventual 23. Action may be slow but would buy on all dips. MISSOURI, KANSAS-TEXAS,PFD. – The stock has a very interesting pattern. The 1948 top at 34-20 indicated a decline to 19. The June, 1949 low was 16 which held at the February low. The strong potential base pattern formed in the 16-25 range has been penetrated upside. I The intermediate objective is 31-34. Would buy on all dips. I SEABOARD AIR LINE R.R. – The stock has broken out of the 14-17 range on the upside and indicates an intermediate term rally to 24-28. The longer term pattern is also favorable. The stock has held in the broad 12-26 range for over three years. An upside penetration would indicate 38-40. Atchison, Top. & S.S. Gulf,Mobile & Ohio Approx. Price 108 15 1949 Div. 8.00 .50 Yield 7.3 3.3 1946 High 121 30t 1949 Earninss 18.06 2.52 Missouri-Kan-Tex-pfd 24 none none 52 7.30 Seaboard Air Line .24 2.00a 8.1 37 3/4 5.16 a Dividend just increased to 501 a quarter. . Carries accumulated back dividends of 128 a share. March 10, 1950 EDMUND W. TABELL WALSTON, HOFFMAN & GOODWIN Thh memorandum Is not to be construed as an aUgr or sollcitatTon of oHan to bllY or sell any sec.urities. From lima to time Wallton, Hofman & Goodwin may have an Interest In some or all of the securities mentioned herein. The foreqolng material has been prepared by us as a matter of Informatton only. It Is based upon Information believed reliable but not necessarily complete. is not glltHonteed as accurote or finol, and is not Intended to foreclose Independent Inquiry. .. i,