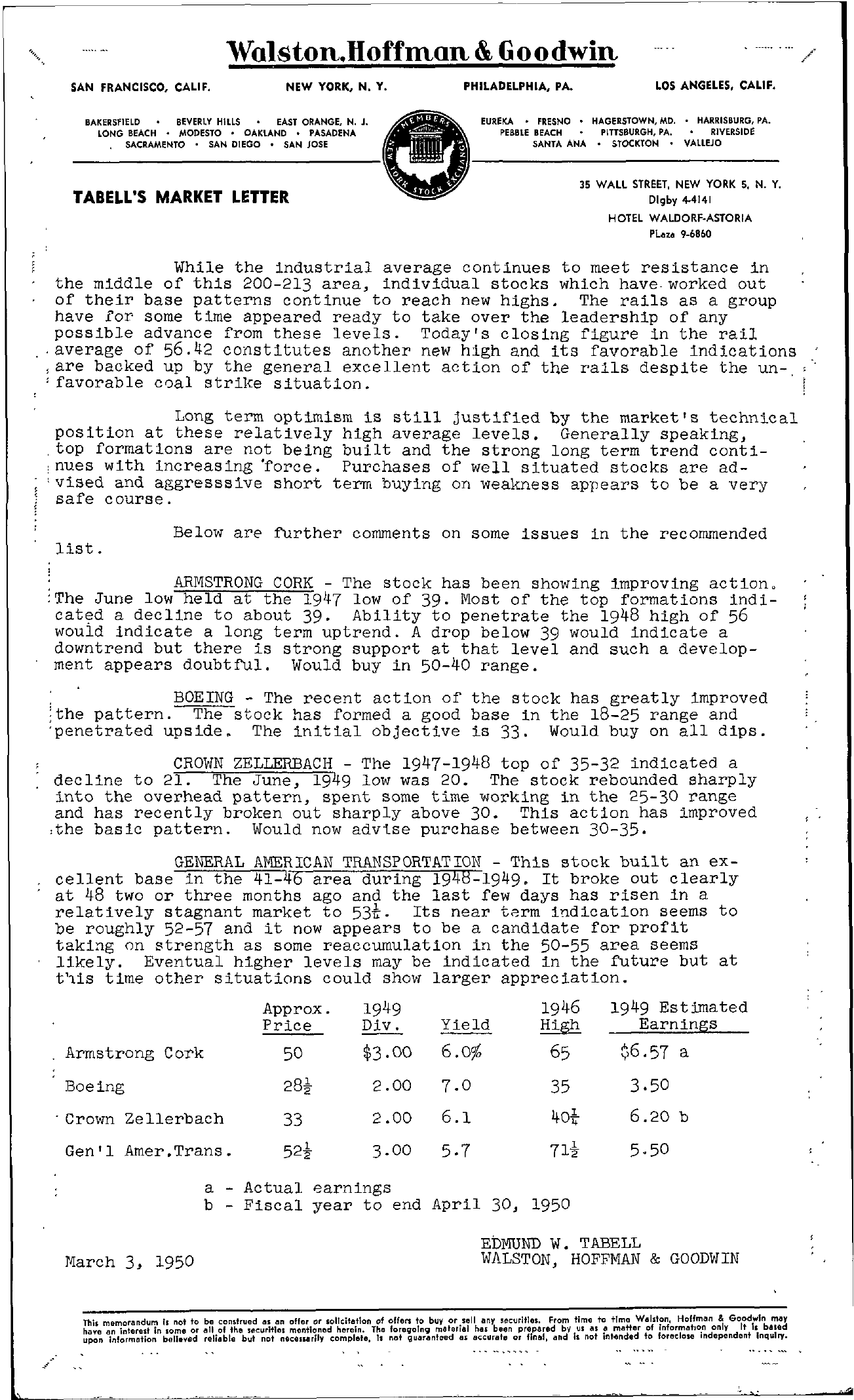 ' Walston.Hoffman &, Goodwin SAN FRANCISCO, CALIF. NEW YORK, N. Y. PHILADELPHIA, PA. LOS ANGELES, CALIF. BAKERSfiELD BEVERLY HILLS EAST ORANGE, N. J. LONG BEACH MODESTO OAKLAND PASADENA SACRAMENTO SAN DIEGO SAN JOSE EUREKA FRESNO HAGERSTOWN, MD, HARRISBURG, PA. PEBBLE BEACH PITTSBURGH, PA. RIVERSIDE SANTA ANA STOCKTON VALLEJO TABELL'S MARKET LETTER 35 WALL STREET. NEW YORK 5. N. Y. Digby 4.4141 HOTEL WALDORFASTORIA PLaza 9-6860 While the industrial average continues to meet resistance in the middle of this 200-213 area, individual stocks which have-worked out of their base patterns continue to reach new highs. The rails as a group have for some time appeared ready to take over the leadership of any possible advance from these levels. Today's closing figure in the rail . average of 56.42 constitutes another new high and its favorable indications ,are backed up by the general excellent action of the rails despite the un'favorable coal strike situation. Long term optimism is still justified by the market's technical position at these relatively high average levels. Generally speaking, top formations are not being built and the strong long term trend conti;nues with increasing 'force. Purchases of well situated stocks are ad'vised and aggresssive short term buying on weakness appears to be a very safe course. list. Below are further comments on some issues in the recommended ARMSTRONG CORK – The stock has been showing improving actiono The June low held at the 1947 low of 39. Most of the top formations indicated a decline to about 39. Ability to penetrate the 1948 high of 56 wouid indicate a long term uptrend. A drop below 39 would indicate a downtrend but there is strong support at that level and such a develop- ment appears doubtful. Would buy in 50-40 range. BOEING – The recent action of the stock has greatly improved the pattern. The stock has formed a good base in the 18-25 range and 'penetrated upsideo The initial objective is 33. Would buy on all dips. CROWN ZELLERBACH – The 1947-1948 top of 35-32 indicated a decline to 21. The June, 1949 low was 20. The stock rebounded sharply into the overhead pattern, spent some time working in the 25-30 range and has recently broken out sharply above 30. This action has improved ,the basic pattern. Would now advtse purchase between 30-35. GENERAL AMERICAN TRANSPORTATION – This stock built an ex- cellent base in the 41-46 area during 1948-19490 It broke out clearly at 48 two or three months ago and the last few days has risen in a relatively stagnant market to 53. Its near tArm indication seems to be roughly 52-57 and it now appears to be a candidate for profit taking on strength as some reaccumulation in the 50-55 area seems likely. Eventual higher levels may be indicated in the future but at t'1is time other situations could show larger appreciation. Armstrong Cork Approx. Price 50 1949 Div. 3.00 Yield 6.0 1946 High 65 1949 Estimated Earnings 6.57 a Boeing 28 2.00 7.0 35 3.50 – Crown Zellerbach 33 2.00 6.1 40i- 6.20 b Gen'l Amer.Trans. 52 300 5.7 71 550 a – Actual earnings b – Fiscal year to end April 30, 1950 March 3, 1950 EDMUND W. TABELL WALSTON, HOFFMAN & GOODWIN This memoralldum Is 1I0t to be cORstrued as o!In offer or sollcito!ltlon of offers to buy or sell lillY securities, From time to tIme Walston, Hoffman Golodrl'b maJ hilve an intered In some or all of the securitIes montlORed hareill. The foregoln9 material has beeR prepared b'l us as a matter of Information on y t lase upon information baU.ved reliable but not necenarlly complete, It not guaranteed as accurate or final, and Is not intended to foreclose indepeRdent InQuiry.