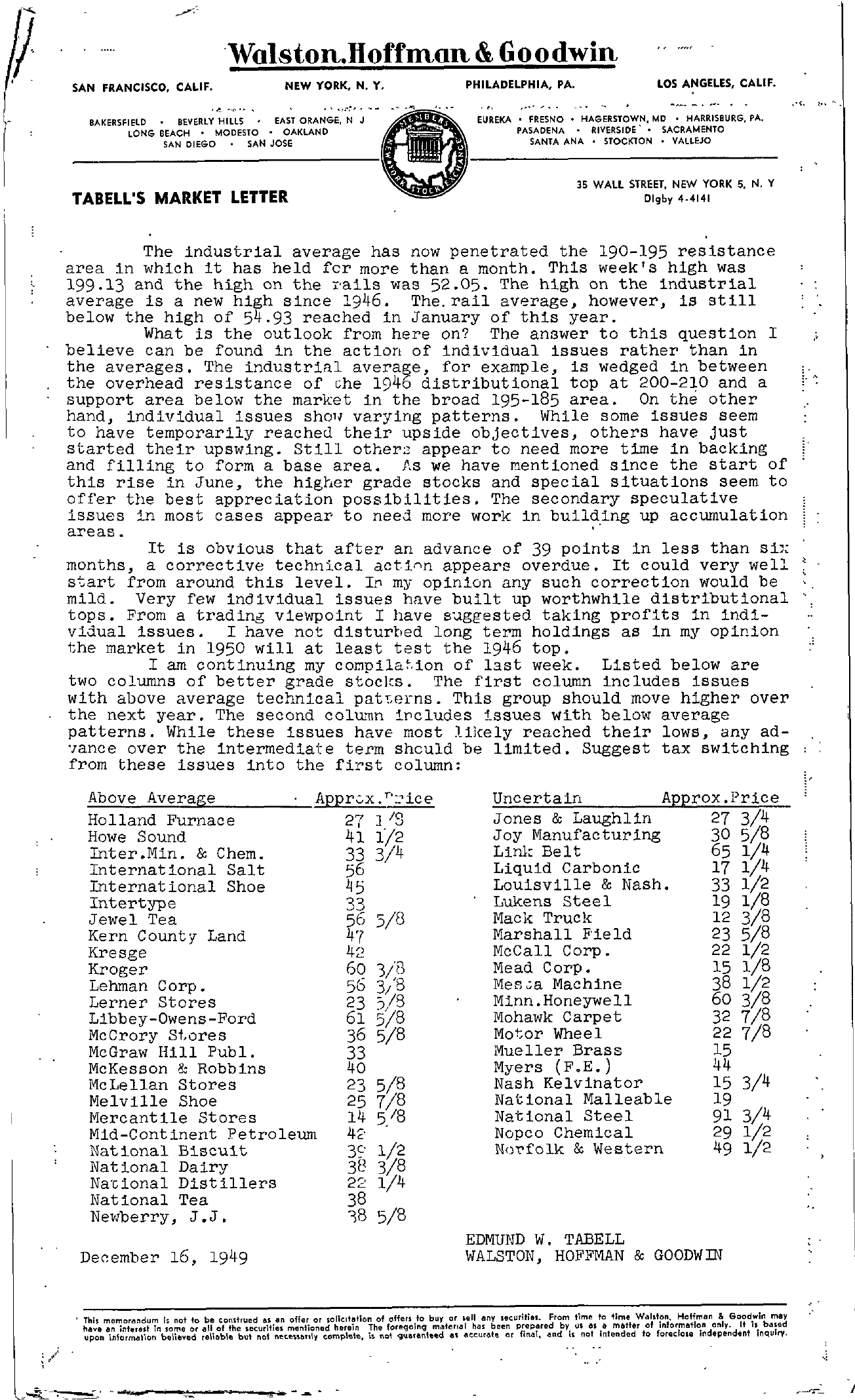 TABELL'S MARKET LETTER 35 WALL STREET, NEW YORK 5, N. Y Digby 44141 The industrial average has now penetrated the 190-195 resistance area in which it has held for more than a month. This week's high was 199.13 and the high on the r'ails was 52.05. The high on the industrial average is a new high Since 1946. The. rail average, however, is still below the high of 54.93 reached in January of this year. What is the outlook from here on The answer to this question I ,; believe can be found in the action of individual issues rather than in the averages. The industrial average, for example, is wedged in between the overhead resistance of che 1946 distributional top at 200-210 and a ,… support area below the market in the broad 195-185 area. On the other hand, individual issues shol, varying patterns. While some issues seem to have temporarily reached their upside objectives, others have just started their upswing. Still other2 appear to need more time in backing and filling to form a base area. As we have mentioned since the start of this rise in June, the higher grade stocks and special situations seem to offer the best appreciation possibilities. The secondary speculative issues in most cases appear to need more work in building up accumulation areas. It is obvious that after an advance of 39 points in less than six months, a corrective technical act-inn appears overdue. It could very well start from around this level. In my opinion any such correction would be mild. Very few individual issues have built up worthwhile distributional tops. From a trading vieWpoint I have B'Jggested taking profits in indi- vidual issues. I have not disturbed long term holdings as in my opinion the market in 1950 will at least test the 1946 top. I am continuing my compila.ion of last week. Listed below are two columns of better grade stocles. The first column includes issues with above average technical patcerns. This group should move higher over the next year. The second coln includes issues with below average patterns. While these issues have most likely reached their lows, any ad- 'lance over the intermediate term shculd be limited. Suggest tax switching from these issues into the first column Above Average Appr,,x, P.'ice Holland Furnace Howe Sound Inter.Min. & Chern. International Salt International Shoe 2'7 1 13 I 41 1/2 33 3/4 56 5 Intertype Jewel Tea Kern County Land Kresge 33 56 5/8 47 42 Kroger Lehman Corp. Lerner Stores Libbey-Owens-Ford 60 '3/8 56 3/8 23 ,)/8 61 5/8 McCrory Stores McGraw Hill Publ. McKesson & Robbins kLellan Stores MelVille Shoe Mercantile Stores Mid-Continent Petroleum National Biscuit National Dairy Naional Distillers 36 5/8 33 40 23 5/8 25 7/8 14 5/8 4; 3' 1/2 38 3/8 22 1/4 National Tea Newberry, J.J. 38 '18 5/8 December 16, 1949 Uncertain Approx.Price Jones & Laughlin 27 3/4 Joy Manufacturing 30 5/8 Link Belt 65 1/4 Liquid CarboniC 17 1/4 Louisville & Nash. 33 1/2 Lukens Steel 19 1/8 Mack Truck 12 3/8 Marshall Field McCall Corp. 23 5/8 22 1/2 Mead Corp. 15 1/8 Mesca Machine 38 1/2 Minn.Honeywell Mohawk Carpet Motor Wheel 60 3/8 32 7/8 22 7/8 Mueller Brass Myers (F.E.) 15 44 Nash Kelvinator 15 3/4 National Malleable National Steel Nopco Chemical 19 91 3/4 29 1/2 Not'folk & Western 49 1/2 EDMUND W. TABELL WALSTON, HOFFMAN & GOODWIN , This have manemiontrellrnedtumin is not lome to or be all construed as an of the securities offer or solkltetion of mentioned herein The offers to foregoing buy or sell !Iny securities. From mate filii has been prepared by time to os as a 1ime Walston, Hoffman & Goodwin may matter of lnformlltlon only. It Is based upon information belillvBd relillble but not necBsUlflly compleie, is not quaranteed al atc.urate or final, and is not Intended to foreclole independent Inquiry. .'-. '——A- — J