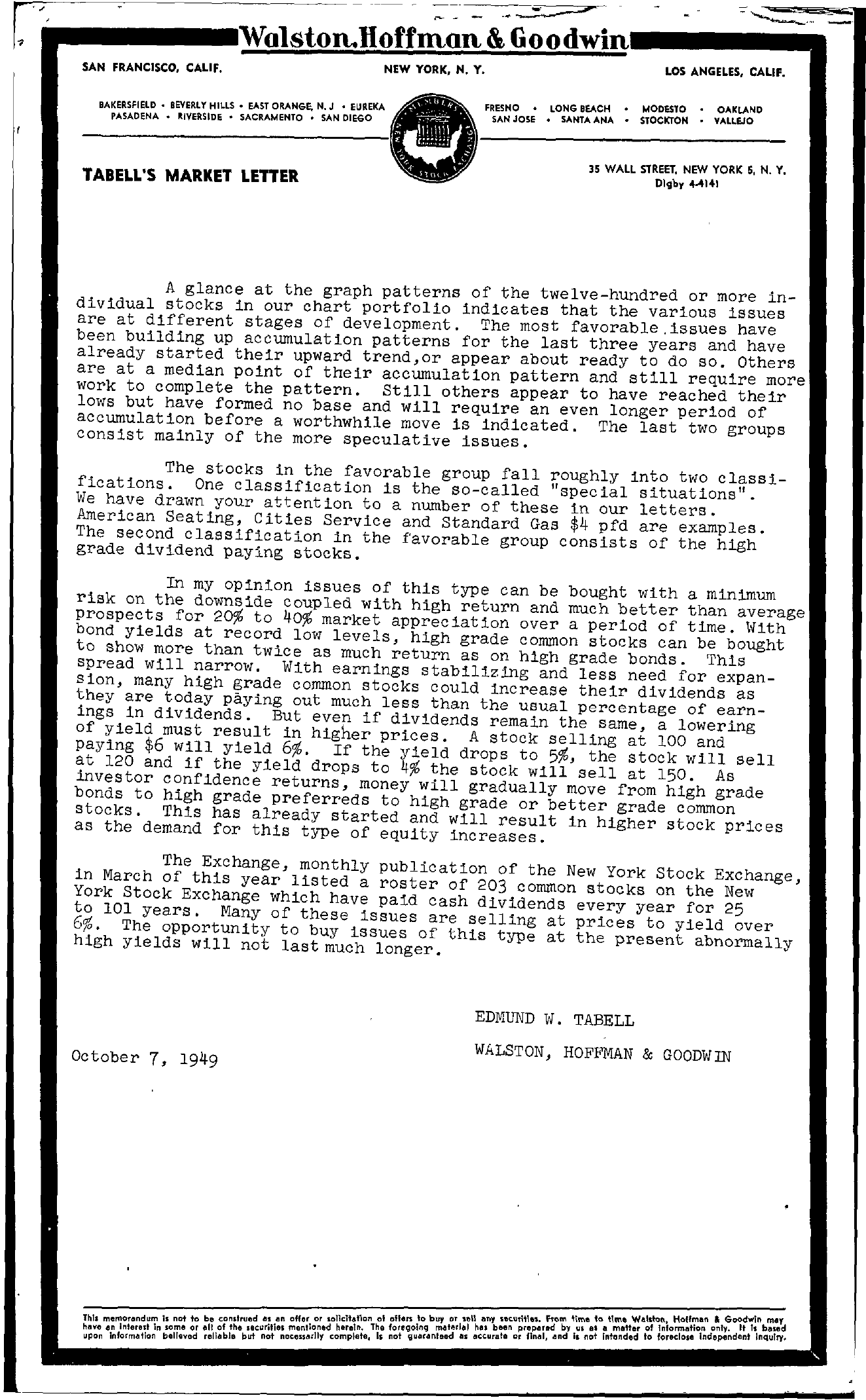 TABELL'S MARKET LETTER 35 WALL STREET, NEW YORK 5, N. Y. Digby 4-4141 A glance at the graph patterns of the twelve-hundred or more individual stocks in our chart portfolio indicates that the various issues are at different stages of development. The most favorable.issues have been building up accumulation patterns for the last three years and have already started their upward trend,or appear about ready to do so. Others are at a median point of their accumulation pattern and still require more work to complete the pattern. Still others appear to have reached their lows but have formed no base and will require an even longer period of accumulation before a worthwhile move is indicated. The last two groups consist mainly of the more speculative issues. The stocks in the favorable group fall roughly into two classifications. One classification is the so-called special situations. We have drawn your attention to a number of these in our letters. American Seating, Cities Service and Standard Gas 4 pfd are examples. The second classification in the favorable group consists of the high grade dividend paying stocks. In my opinion issues of this type can be bought with a minimum risk on the downside coupled with high return and much better than average prospects for 20 to 40 market appreciation over a period of time. With bond yields at record low levels, high grade common stocks can be bought to show more than twice as much return as on high grade bonds. This spread will narrow. With earnings stabilizing and less need for expanSion, many high grade common stocks could increase their dividends as they are today paying out much less than the usual percentage of earnings in dividends. But even if dividends remain the same, a lowering of yield must result in higher prices. A stock selling at 100 and paying 6 will yield 6. If the yield drops to 5, the stock will sell at 120 and if the yield drops to 4 the stock will sell at 150. As investor confidence returns, money will gradually move from high grade bonds to high grade preferreds to high grade or better grade common stocks. This has already started and will result in higher stock prices as the demand for this type of equity increases. The Exchange, monthly publication of the New York Stock EXChange, in March of this year listed a roster of 203 common stocks on the New York Stock Exchange which have paid cash dividends every year for 25 to 101 years. Many of these issues are selling at prices to yield over 6hig. h Tyhiee ldosppworitlul nniotyt tloasbtumyucihssluoensgeorf. this type at the present abnormally October 7, 1949 EDMUND W. TABELL WALSTON, HOFFMAN & GOODWIN This memorandum is not to huapyone tiInnfIonrmteartuiotnin bseolmieeveodr erbleellioacfobnlteshterbusueetdcunlrioSittiteisnn emcoefe5fnestarlroo,'r,'fe dscoonhmeerlpeta,et,1'oen, T0,efnf0oOi fteersouItoaabnU7'Je.eadOtefrllinaS'l \ahcaucnuyrbaeSteeKn loltirtfleienpsatl,ehdoanmbdy tIums eafl I, not oa tImmeettWer Intended aoldf oInn,'oHrmofaftmioann o&nlyG. oOItdwIsinbmelaeyd to foreclose Independent Inquiry.