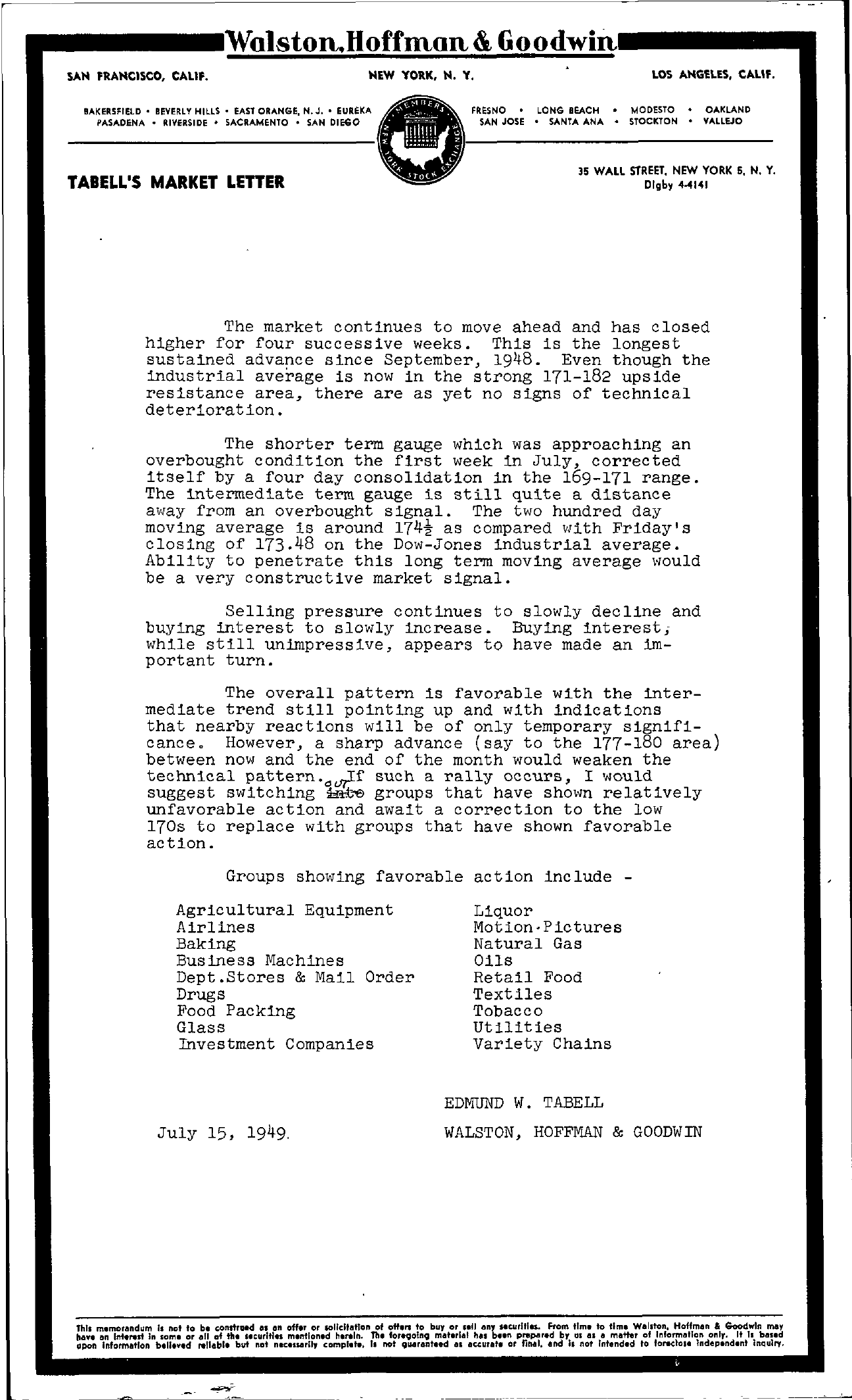 TABELL'S MARKET LETTER 35 WALL STREET. NEW YORK 5. N. Y. Digby 4-'1141 The market continues to move ahead and has closed higher for four successive weeks. This is the longest sustained advance since September, 1948. Even though the industrial average is now in the strong 171-182 upside resistance area, there are as yet no signs of technical deterioration. The shorter term gauge which was approaching an overbought condition the first week in July, corrected itself by a four day consolidation in the 169-171 range. The intermediate term gauge is still quite a distance away from an overbought signal. The two hundred day moving average is around 174 as compared with Friday'S closing of 173.48 on the Dow-Jones industrial average. Ability to penetrate this long term moving average \'/Ould be a very constructive market signal. Selling pressure continues to slowly decline and buying interest to slowly increase. Buying interest, while still unimpressive, appears to have made an important turn. The overall pattern is favorable with the intermediate trend still pointing up and with indications that nearby reactions will be of only temporary signifi- cance. However, a sharp advance (say to the 177-180 area) between now and the end of the month would weaken the technical pattern'df such a rally occurs, I would suggest switching groups that have shown relatively unfavorable action and await a correction to the low 170s to replace with groups that have shown favorable action. Groups showing favorable action include – Agricultural Equipment Airlines Baking Business Machines Dept.Stores & Mail Order Drugs Food Packing Glass Investment Companies Liquor MotionPictures Natural Gas 011s Retail Food Textiles Tobacco Utilities Variety Chains July 15, 1949. EDMUND W. TABELL WALSTON, HOFFMAN & GOODWIN ThIs m.morandum Is not to b. nttra .n on offt;r or solicitation of off.rs to buy Ot 11 an, ..curtlla. From tIm. to tim. Wallton, Hoffmon & Goodwin may have lin Int,,..st In some or U of tile s.curltles mentlon.d h.,..ln. lb. for'Qolnt mat.rlal hal b..n prepared by us al a matte, of InformatTon only. It II baled llpon Information believed reliable but not necessarily compl…., II not ljluaranteed 151 accurat. or final, and Is not Intended to 'o,..co,. lndep.ndent inqulry.