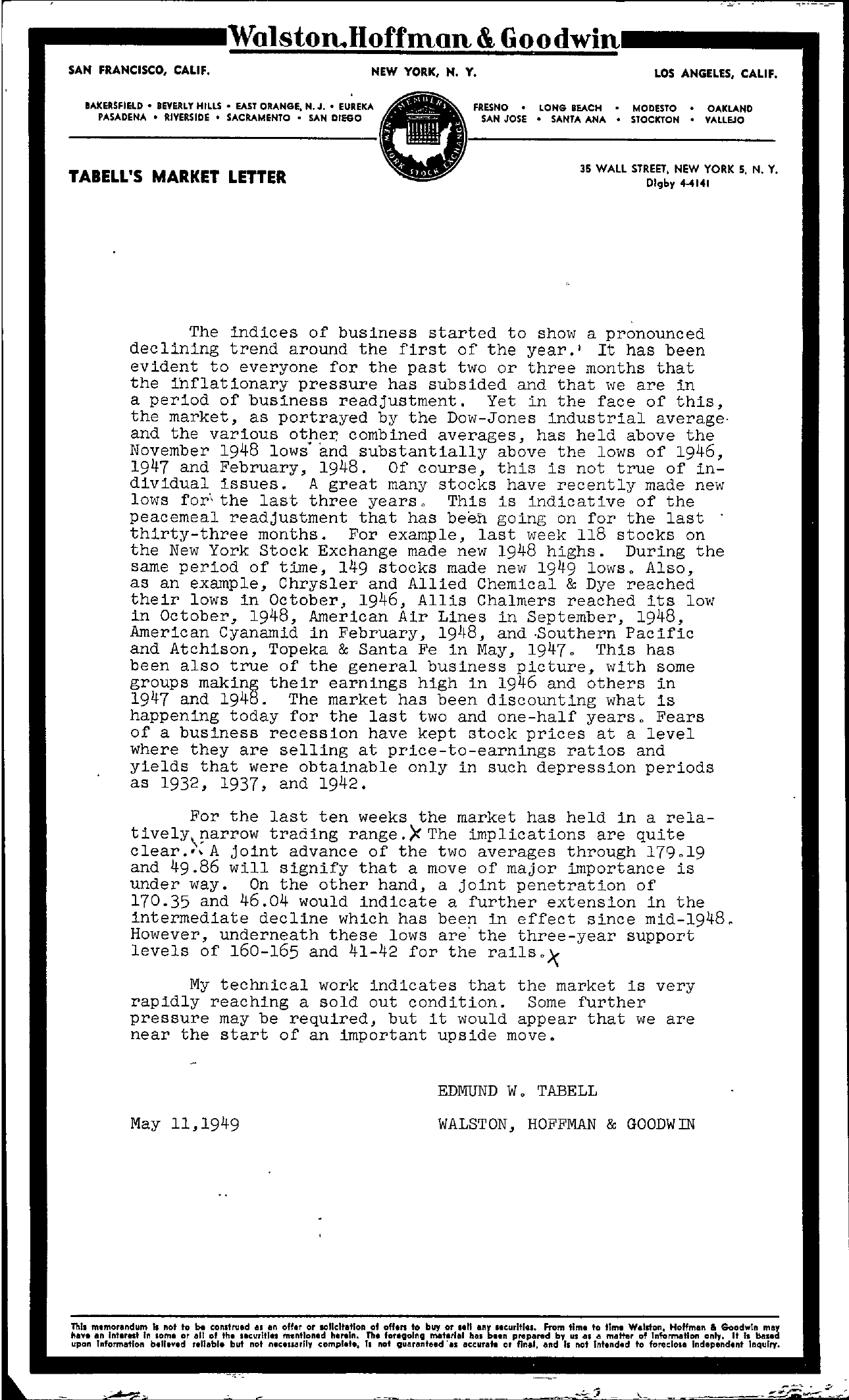 TABELL'S MARKET LETTER 35 WAll STREET, NEW YORK 5, N. Y. Digby 4-4141 The indices of bUSiness started to show a pronounced declining trend around the first of the year.' It has been eVident to everyone for the past two or three months that the i'nflationary pressure has subsided and that we are in a period of bUSiness readjustment. Yet in the face of this, the market, as portrayed by the Dow-Jones industrial average and the various other combined averages, has held above the November 1948 lows and substantially above the lows of 1946, 1947 and February, 1948. Of course, this is not true of individual issues. A great many stocks have recently made new lows for the last three years. This is indicative of the peacemeal readjustment that has been going on for the last . thirty-three months. For example, last week 118 stocks on the New York Stock Exchange made new 1948 highs. During the same period of time, 149 stocks made new 1949 lows. Also, as an example, Chrysler and Allied Chemical & Dye reached their lows in October, 1946, Allis Chalmers reached its low in October, 1948, American Air Lines in September, 1948, American Cyanamid in February, 1948, and Southern Pacific and Atchison, Topeka & Santa Fe in May, 1947. This has been also true of the general business picture, with some groups making their earnings high in 1946 and others in 1947 and 1948. The market has been discounting what is happening today for the last two and one-half years. Fears of a business recession have kept stock prices at a level where they are selling at price-to-earnings ratios and yields that were obtainable only in such depression periods as 1932, 1937, and 1942. For the last ten weeks the market has held in a relatively\arrow trading range.XThe implications are quite clear.A joint advance of the two averages through 179.19 and 49.86 will signify that a move of major importance is under way. On the other hand, a joint penetration of 170.35 and 46.04 would indicate a further extension in the intermediate decline which has been in effect since mid-1948. However, underneath these lows are' the three-year support Xlevels of 160-165 and 41-42 for the rails. My technical work indicates that the market is very rapidly reaching a sold out condition. Some further pressure may be required, but it would appear that we are near the start of an important upside move. May 11,1949 EDMUND W. TABELL WALSTON, HOFFMAN & GOODWIN T1I.I, memorandum b not to b. conltrued iIIl an off.r or IOUcltatioll of off. to buy or 11 411, .Ieurltl… From tim. to ttme Wllrton, HoHman I Goodwin may lin. an Int.,..t In lome or all of the 'Icurl.!.. mentioned he,..ln. Th. for'aolnQ fNlt.rI.1 h b..n prepared by us .t a matte, of Information ant,.. It I, baled upon Information believed ,.lIable but not nle.uatily compl,t., Is not auaranteed' II accura or final. and Is not Tntended to foreclose Independent InquIry.