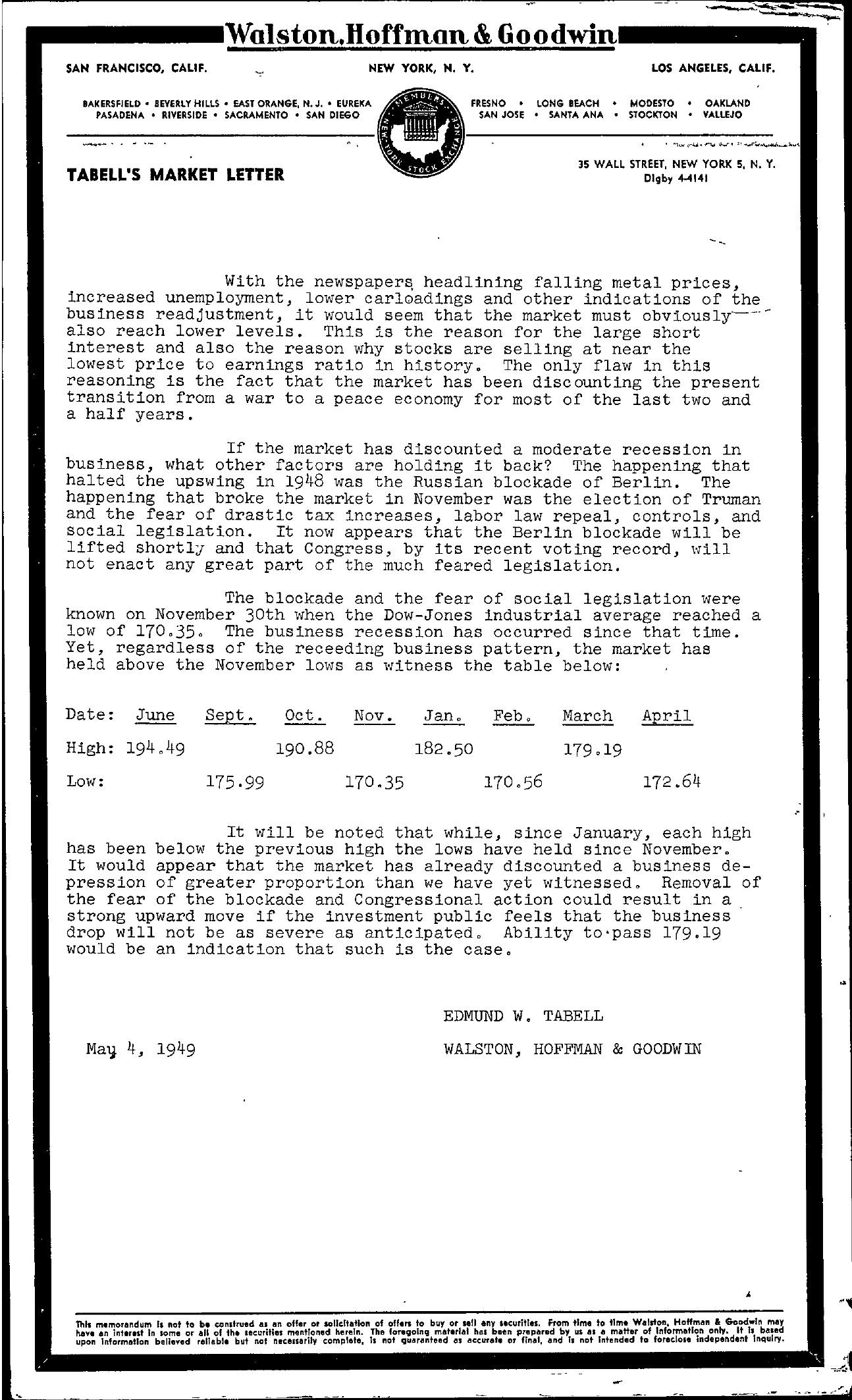 TABELL'S MARKET LETTER 35 WALL STREET, NEW YORK 5. N. Y. Digby 4-4141 With the newspaper headlining falling metal prices, increased unemployment, lower carloadings and other indications of the business readjustment, it would seem that the market must obviously—-also reach lower levels. This is the reason for the large short interest and also the reason why stocks are selling at near the lowest price to earnings ratio in history. The only flaw in this reasoning is the fact that the market has been discounting the present transition from a war to a peace economy for most of the last two and a half years. If the market has discounted a moderate recession in bUSiness, what other factors are holding it back The happening that halted the upswing in 1948 was the Russian blockade of Berlin. The happening that broke the market in November was the election of Truman and the fear of drastic tax increases, labor law repeal, controls, and social legislation. It now appears that the Berlin blockade will be lifted shortly and that Congress, by its recent voting record, will not enact any great part of the much feared legislation. The blockade and the fear of social legislation were known on November 30th when the Dow-Jones industrial average reached a low of 170.35. The bUSiness recession has occurred since that time. Yet, regardless of the receeding business pattern, the market has held above the November lows as witness the table below Date June Sept. Oct. Nov. High 194.49 190.88 182.50 Low 175.99 170.35 March April 179.19 172.64 It will be noted that while, since January, each high has been below the previous high the lows have held since November. It would appear that the market has already discounted a business de- pression of greater proportion than we have yet witnessed. Removal of the fear of the blockade and Congressional action could result in a strong upward move if the investment public feels that the business drop will not be as severe as anticipated. Ability to-pass 179.19 would be an indication that such is the case. MalJ 4, 1949 EDMUND W. TABELL WALSTON, HOFFMAN & GOODWIN Thl, memorandum I, not to b. c.on,trUfld as an offer or solleltatlon of offen to buy or sell any s.curitles. From time to tllM Walston, HoHman & GoodwIn may kev. on interest In some or all of the '.cuTHlel mentioned hereTn. The foregoing material has bun prepared by tIS 1 a matter of Information only. It b baled upon Information belleved reliable but not necessarlly complete, Is not Quarnteed as I!Iccural. or final, and Is not Intended to foreclose Independent Inquiry. –